A  short while back, our youngest and her friends declared they neededanother Taco Night at our house.  This happens about once every three or four months – a bunch of high school kids crowd our living room to watch a movie and make some tacos, burritos, and/or nachos.  Since the kids attending the international high school are from all over the world, my greatest hope is to not cause an international incident somewhere in the kitchen between the crumbled beef and the shredded cheddar.  We’re often pressed into an impromptu taco tutorial for the new kids who recently transferred into the school.

Perfect!  Finally, an excuse for a cake.  I knew instantly I wanted to bake a Red Velvet cake with Cream Cheese frosting (just the thought of it makes me drool – sooo unattractive, but oh well). 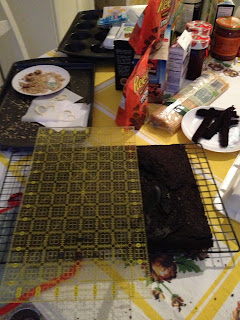 Stepping out of my comfort zone, I decided to take a run at a triple-layer rectangle cake.  I used my new jelly roll pan and turned the cake out on a cooling rack just a few minutes after taking it from the oven.  Hot tip: Don’t be afraid to use non-traditional tools in the kitchen – I frequently use measuring devices and straight edge rulers (typically used in quilting) when marking cakes for cutting, trimming, and building.

As evidenced in the photos, I have yet to conquer smooth corners with buttercream.  Still working on it now, as before.

Baking, layering, and frosting the cake wasn’t enough.  This was Taco Night!  After researching other artisans and their ‘taco’ efforts, I assembled my own version of a celebratory cake and developed a couple innovative techniques in the hopes of confectionary smoke and mirrors. 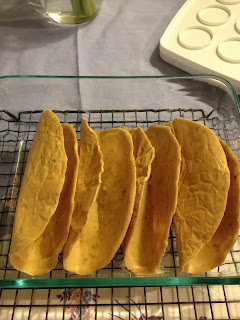 The “shells” were made from 12oz of white chocolate bars melted with a two Hershey kisses and one cumbled-to-powder mini-Oreo cookie (and just a wee bit of yellow food coloring gel?).  I cut 9″ round pieces of tin foil, poured a bit of melted chocolate into the center of the circle, and spread it out evenly – leaving about 1″ of space between the edge of the shell and the edge of the foil.  Place in freezer, let set for 3-4 minutes, remove and gently fold into shape (don’t fold in half like paper, but leave an open channel for the “taco” stuffing); back in freezer to set.  I made four knowing I’d only put three on the cake; it’s nice to have a back-up.  Once shells were set, refrigerate over night.  The next day I took them out around noon in order to acclimate the shells to room temperature.  I’m not a chocolatier; I’ve no idea what I’m doing…whatsoever. 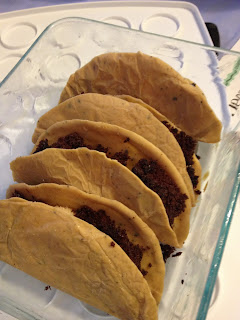 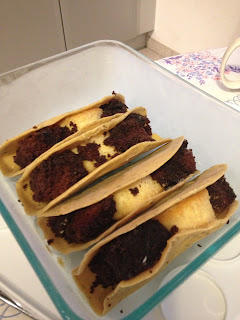 The “meat” in the taco are mini-cupcakes of chocolate and vanilla.  I cut off the dome in order for the cakes to fit snuggly inside the shells (this also serves to keep the shells firmly supported).  I put chocolate on the ends in case the cake showed through – I knew it wouldn’t be a problem hiding the vanilla. 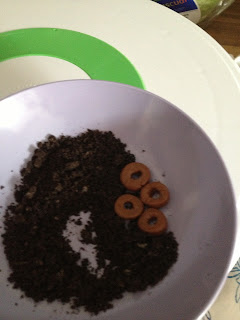 I crumbled up the chocolate cupcake domes for added “ground meat.”  The “olives” were made from a Tootsie Roll I warmed up in my front pocket.  When it was gooey, I sliced it; then I finger-pressed each slice and enlarged the center that I began with a toothpick.  Use whatever you have lying around..improvise, make it your own.﻿ 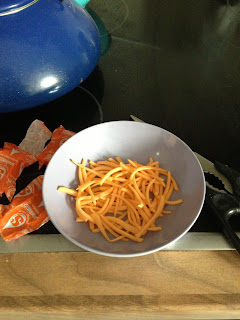 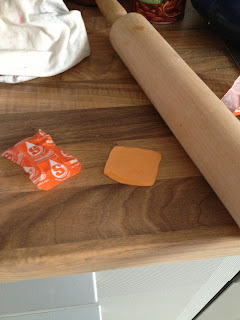 To make the “cheese,”  I warmed up an orange Starburst chew …same front pocket with my Tootsie Roll.  I flattened it with my ever-favorite rolling pin.  I sliced cheese shreds.  When I txt’d a picture of this process to our oldest daughter, she wondered why I was sending photos of cheese.  Shazam! 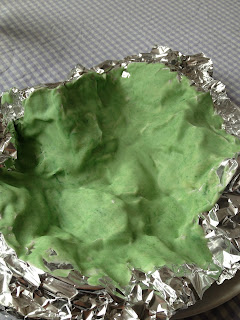 The lettuce was fun!  I melted some more white chocolate candy bars, added green food coloring gel, and poured it thinly over crumpled tin foil.  This went in the fridge overnight.  The next day, it didn’t come off the foil in one piece, but broke apart in my fingers.  Perfect, all the better to dress the taco.  To gauge the size of this “lettuce,” the foil is sitting on a dinner plate. 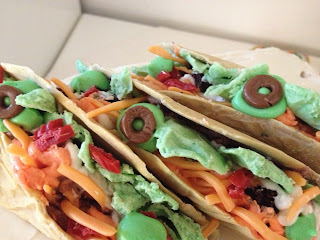 The “tomato” bits are julienned red Twizzlers cut on the bias.  I popped on some green icing for guacamole – next time I’ll take greater caution with getting the color right and adding some bits of color (I was pressed for time at this point).  And, there is a bit of white buttercream standing in for the “sour cream.” 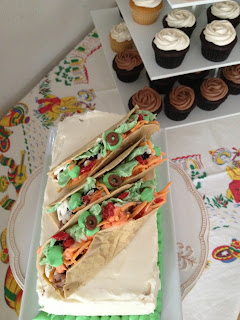 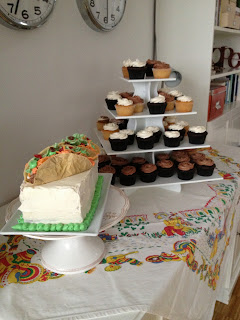 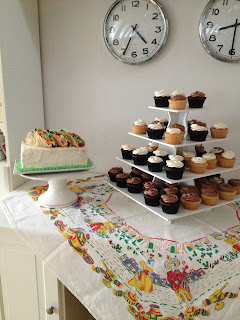 This was a fun cake to think about, explore, and construct.  The Red Velvet cake underneath the tacos was delicious despite its appearance.  The tacos, while fun, were more for WOW! factor than devouring.  Certainly it’s a metaphor.  And a life lesson.

My default character defects are selfish and self-centered.  Judgmental is right up there, too.  This is a good lesson for me … I need to take more time with other people and allow their stories to unfold instead of me writing it for them.