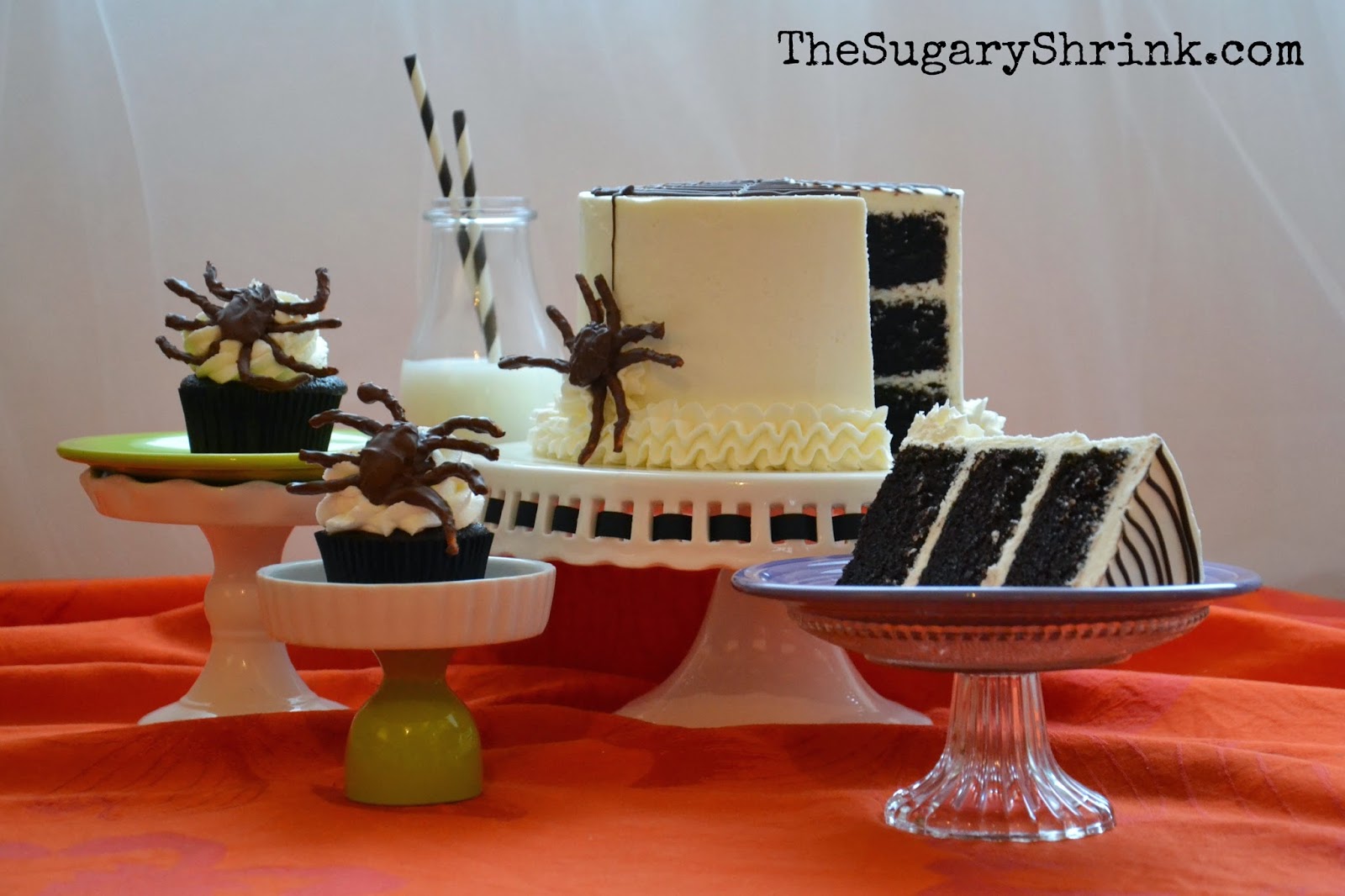 This cake can be as easy or as challenging as the baker chooses.  The cake is my favorite, go-to chocolate cake recipe – it’s incredibly moist and delicious.  It’s very forgiving with ingredient substitutions.

I was so excited to put this cake together…and underestimated the degree of difficulty regarding spider construction.

Let’s start with the cake. 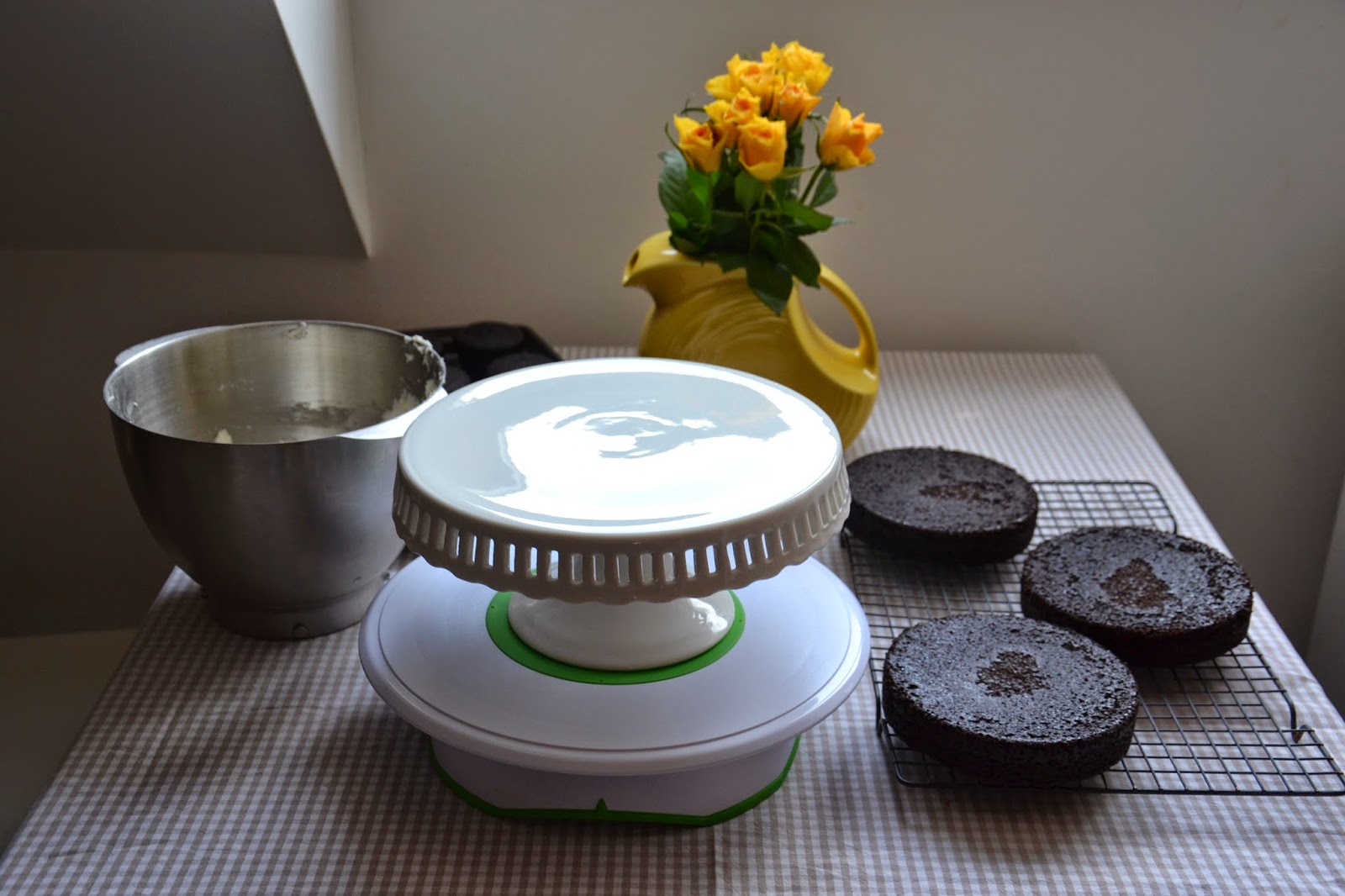 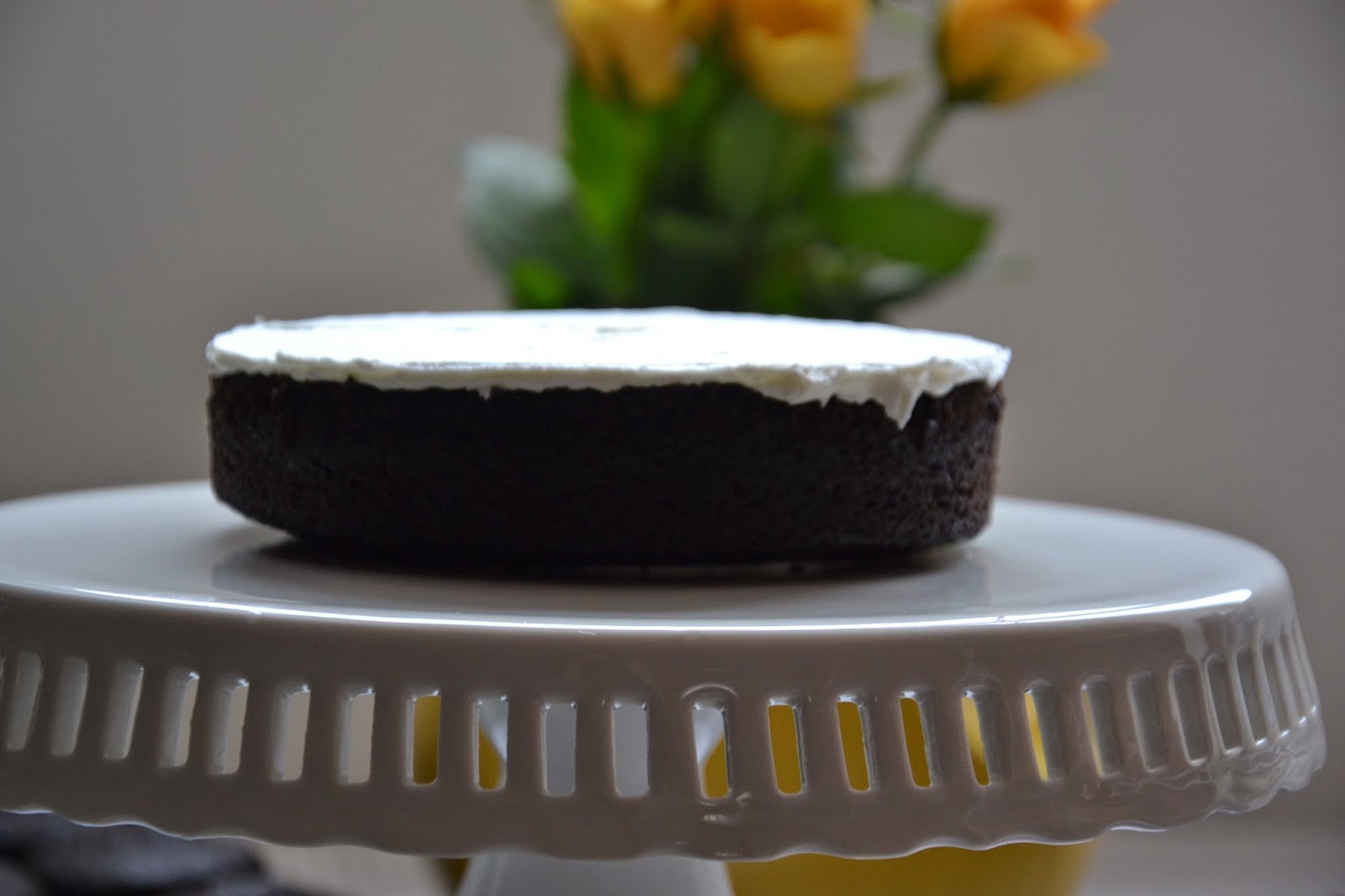 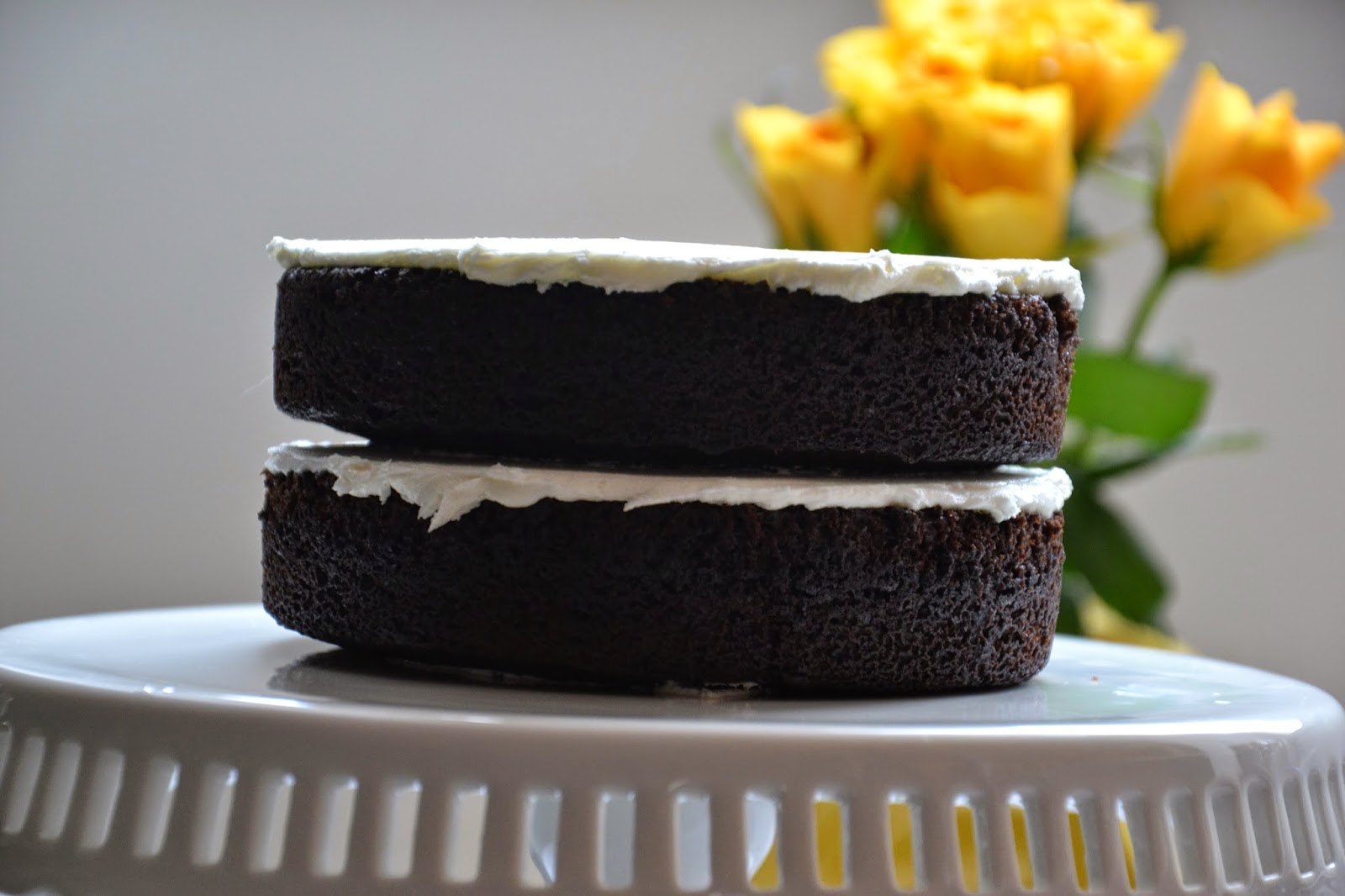 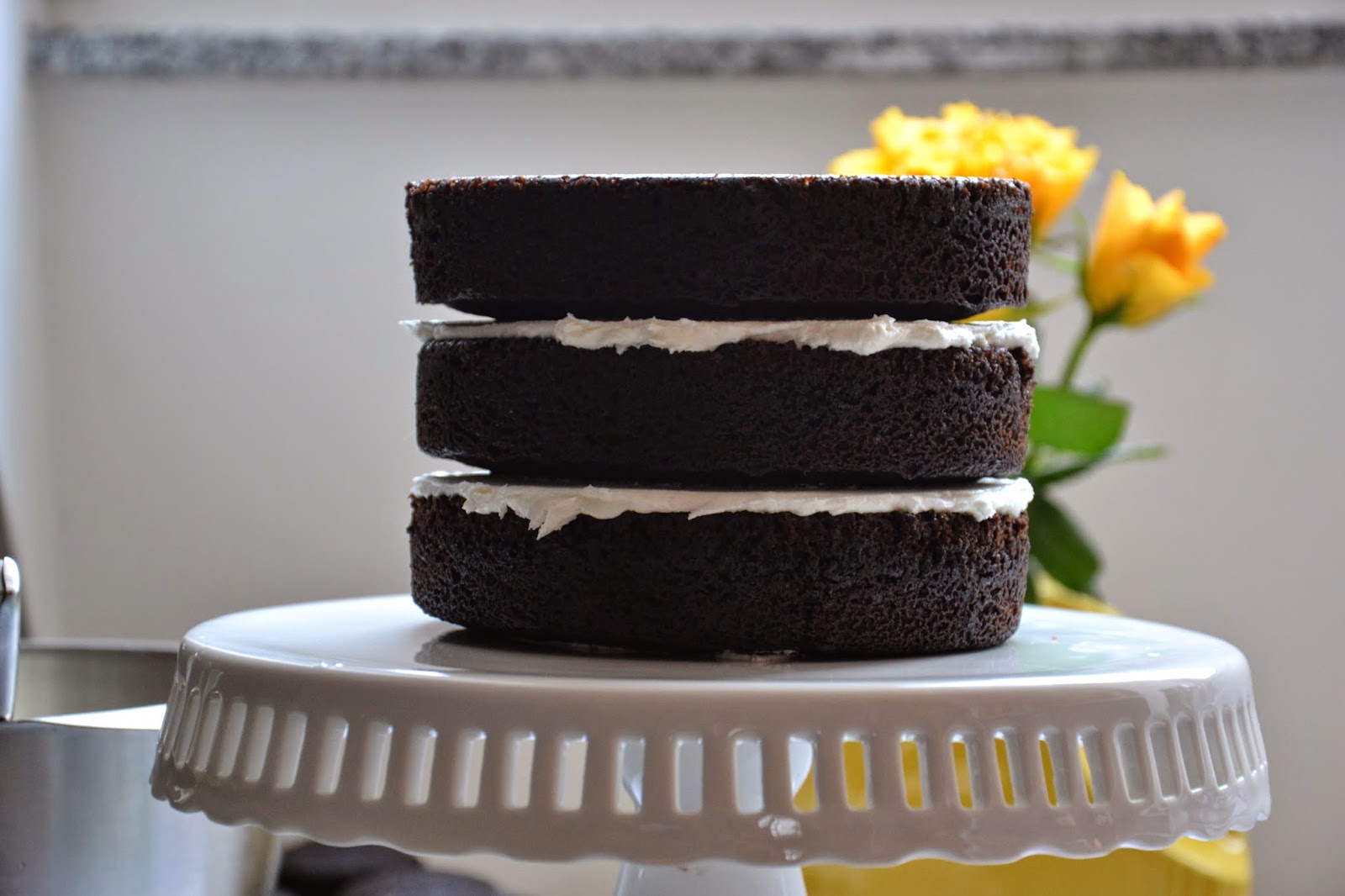 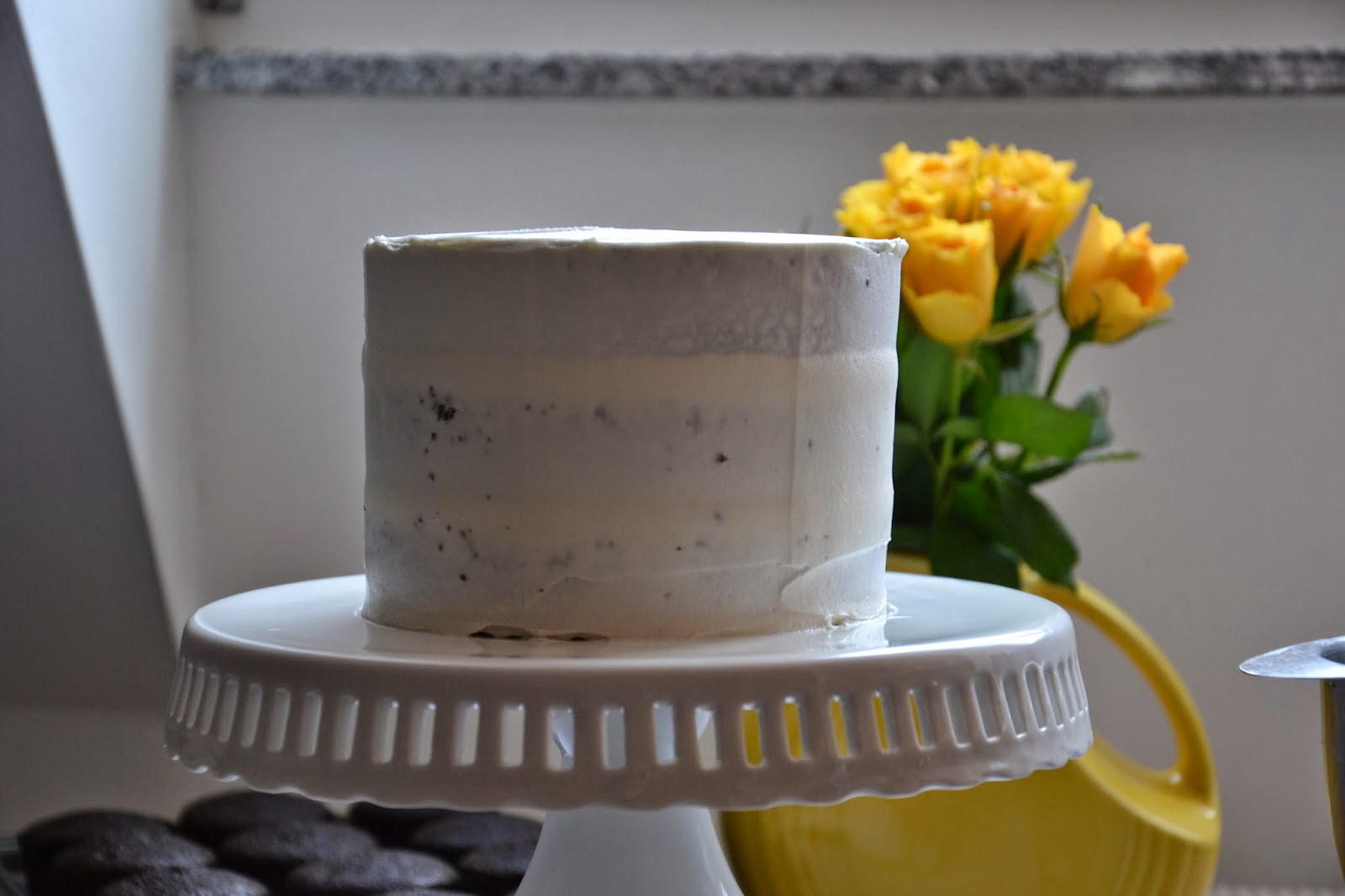 The cake went together so smoothly. I have confidence in this recipe and in producing three even layers.  I wrote a piece for ParentMap.com outlining some cake decorating basics.  Check it out here!  In it, I explain the steps for gently pressing a domed cake round into a flatter profile.
After the crumb coat (which doesn’t involve applying crumbs, but hiding crumbs), I popped the cake into the fridge.  It was a perfect opportunity to make the spiders.  Only three ingredients are used for the spiders:  Nestlé Chocolate Chips, LaChoy chow mein noodles, and pecan halves (room temperature).﻿

I melted the chocolate in the microwave (stirring frequently), added the noodles, and set about making spiders.  I laid parchment paper inside a cookie sheet I knew would fit in the fridge; this was a crazy good idea.  Teasing apart pairs of legs with similar shape was a chore, made worse by my fingers getting coated in chocolate.  I desperately wanted these spiders to have only six legs, but knew that’d be wrong.
Keeping the ‘legs’ from criss-crossing was tedious, but it could have been my impatience.  Once the legs were in place, I dipped the pecan half in chocolate and pressed it in the middle.  I swear a few of those spiders look closer to fleas, but I’m no entomologist. 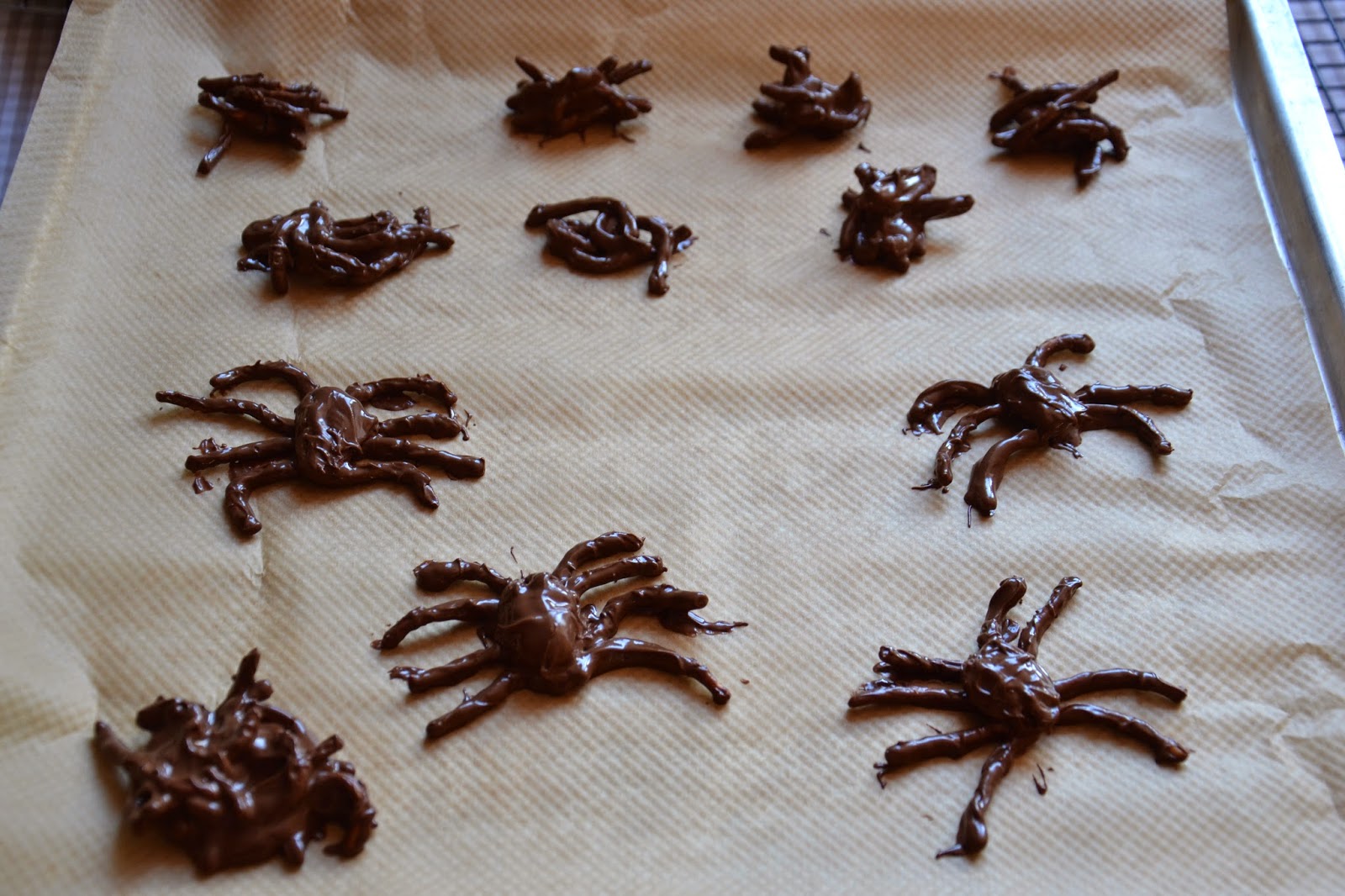 When I’d had enough of the spiders, I took a long look at the generous amount of chocolate covered noodles remained.  As a little girl, we enjoyed this fall treat and called them haystacks.  Making them for our own anklebiters, I added to this recipe whatever was handy: raisins, peanuts, almonds, popcorn, pretzels, M&Ms, etc.  Isn’t there a rule regarding “chocolate covered everything”?
﻿
Anyway, I had a few Pocky sticks (but no pretzels?) in the cabinet; they made a wonderful “Witch’s Broom” to sit on top of a cupcake.  I added chocolate to the cookie-like stick and then applied the chocolate-covered chow mein noodles on the broom handle. 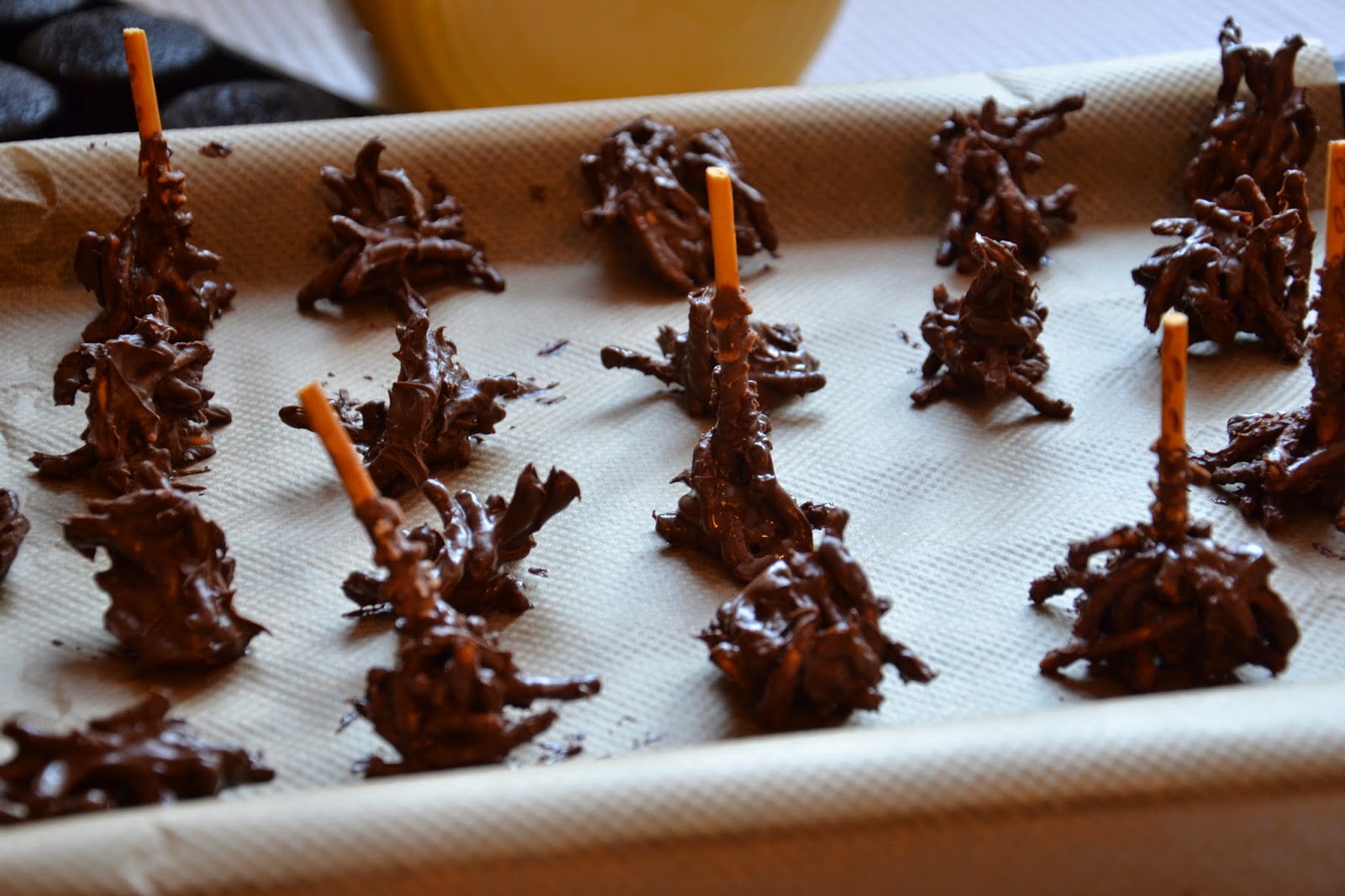 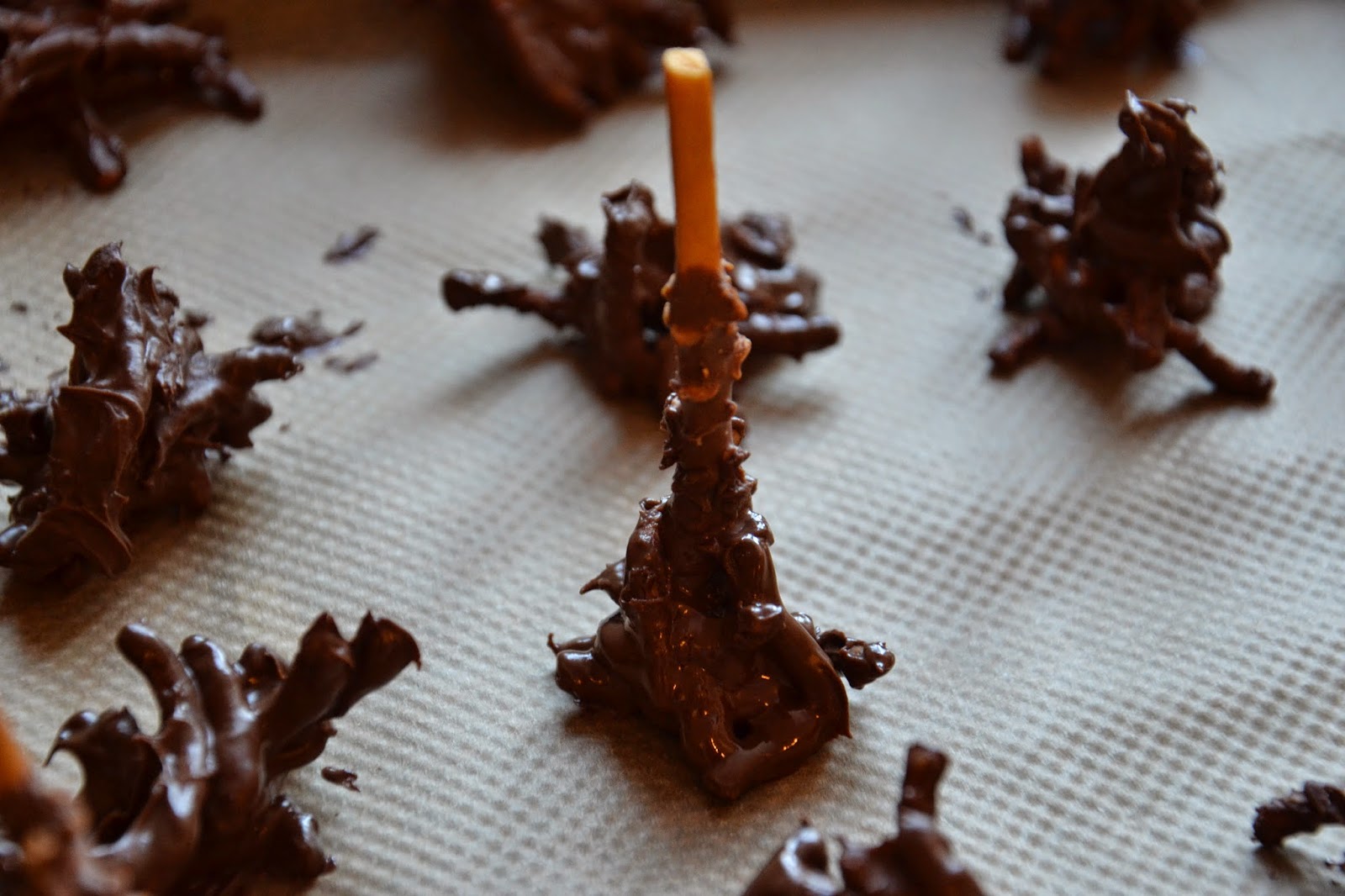 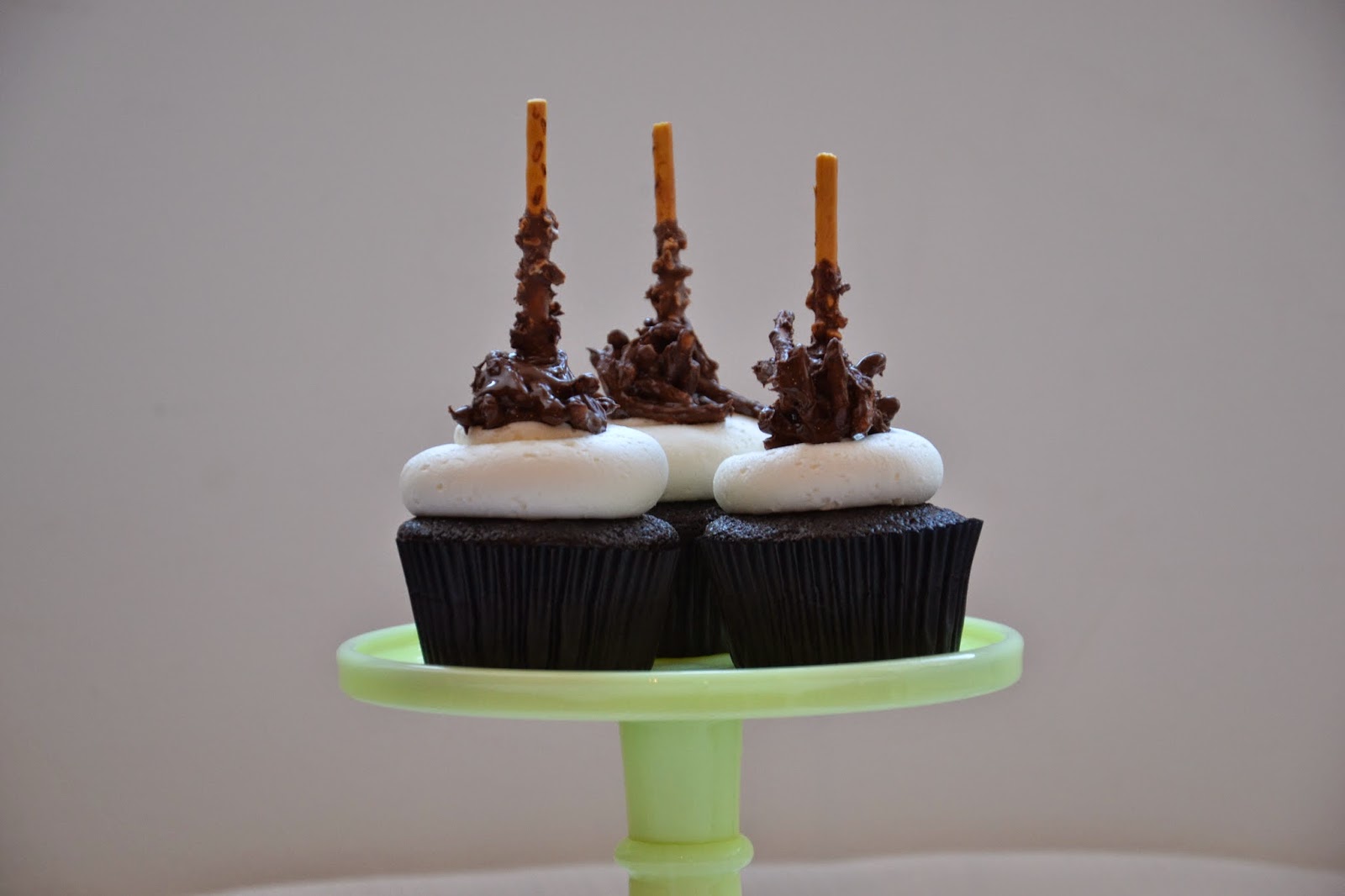 When I ran out of sticks, I made little haystacks.  While not very pretty, the salty/crunchy/sweet is just too yummy.  This is a terrific no-bake, hands-on food activity for kids. 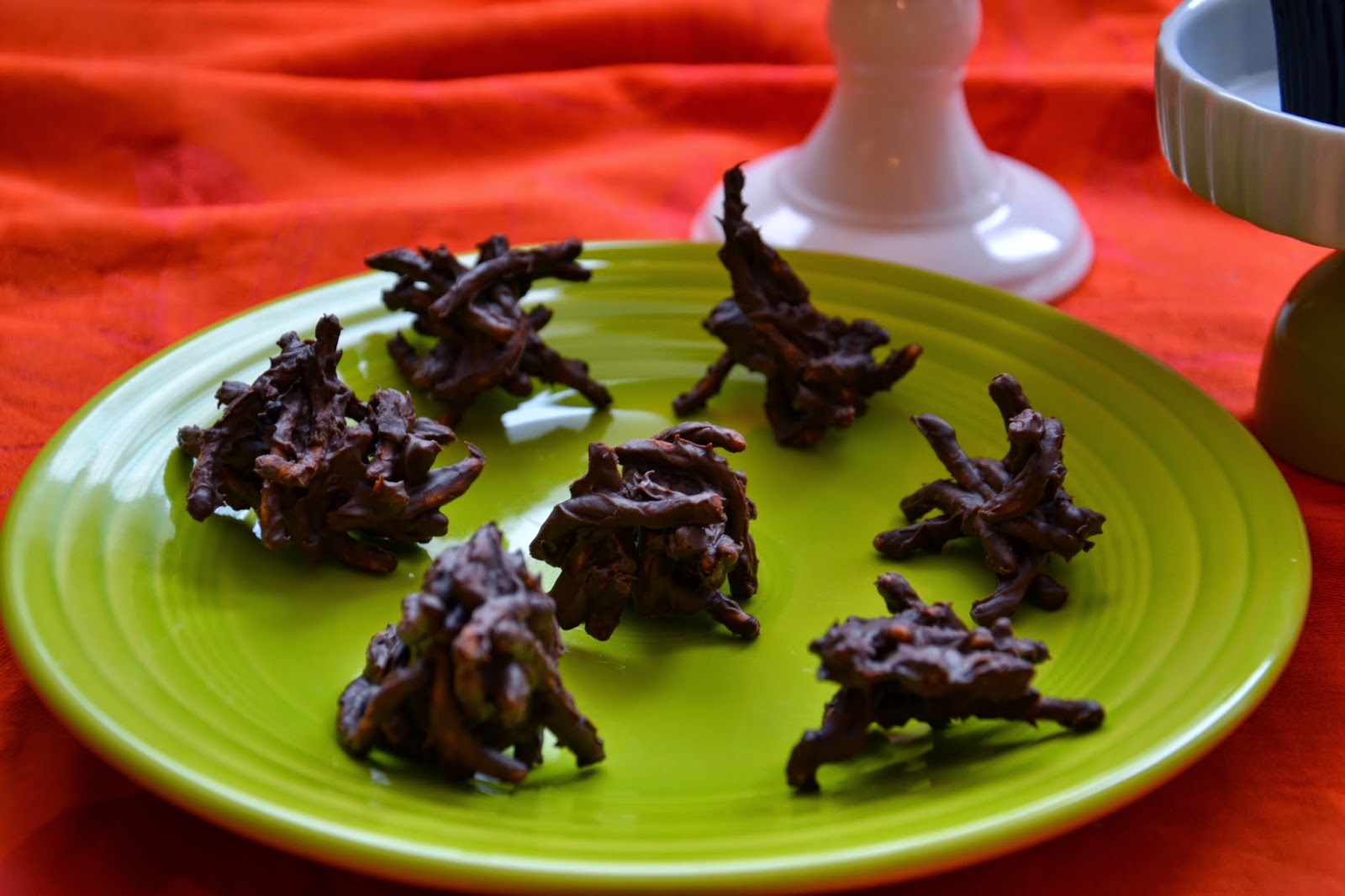 When staging cake and cupcake photos, I sometimes take way too many snapshots.  Often that comes from having too many ideas?  Or, it can be the case, I just don’t know what I like.  In this example, I have an identical arrangement with ivory, yellow, and green. 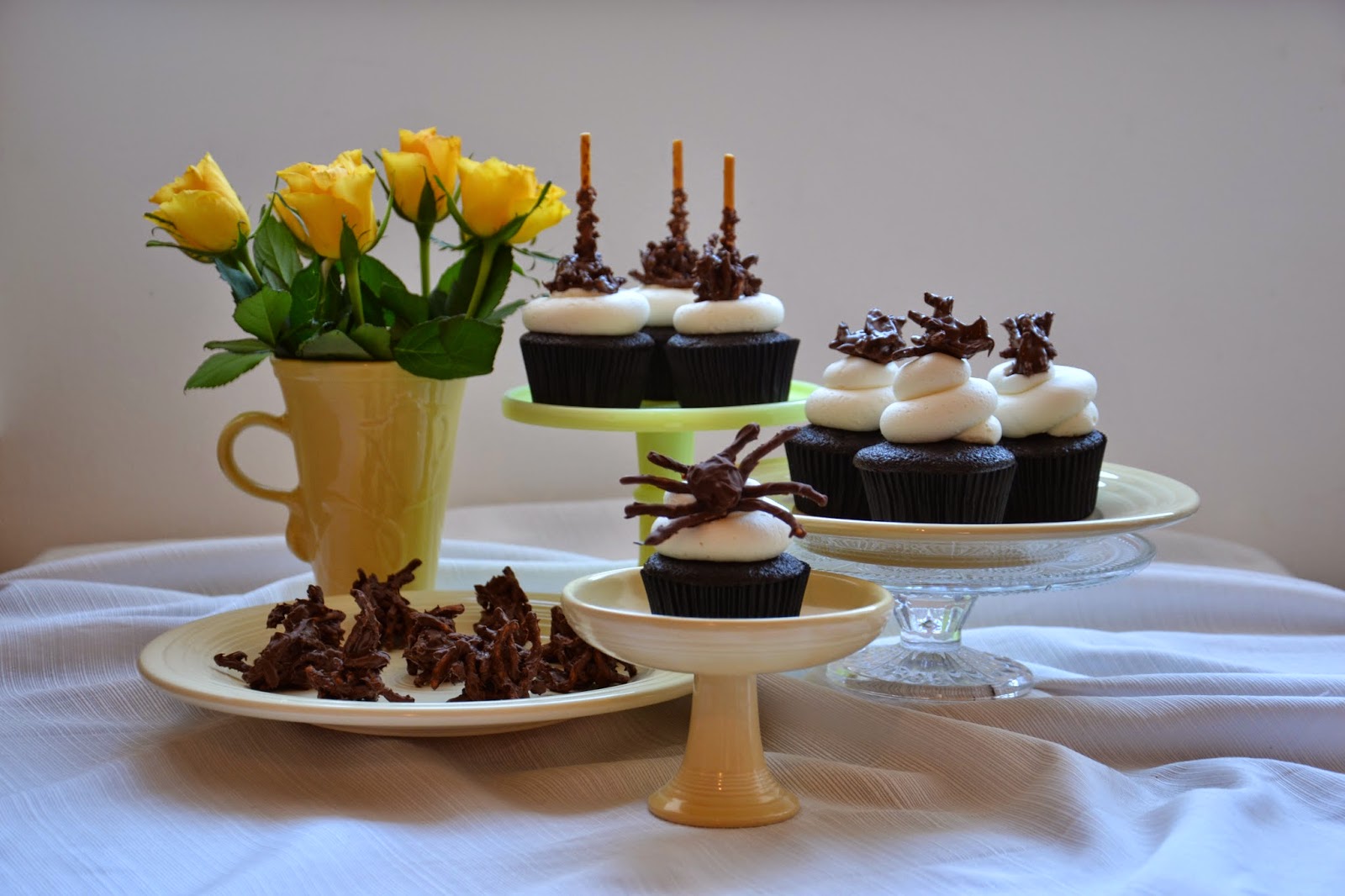 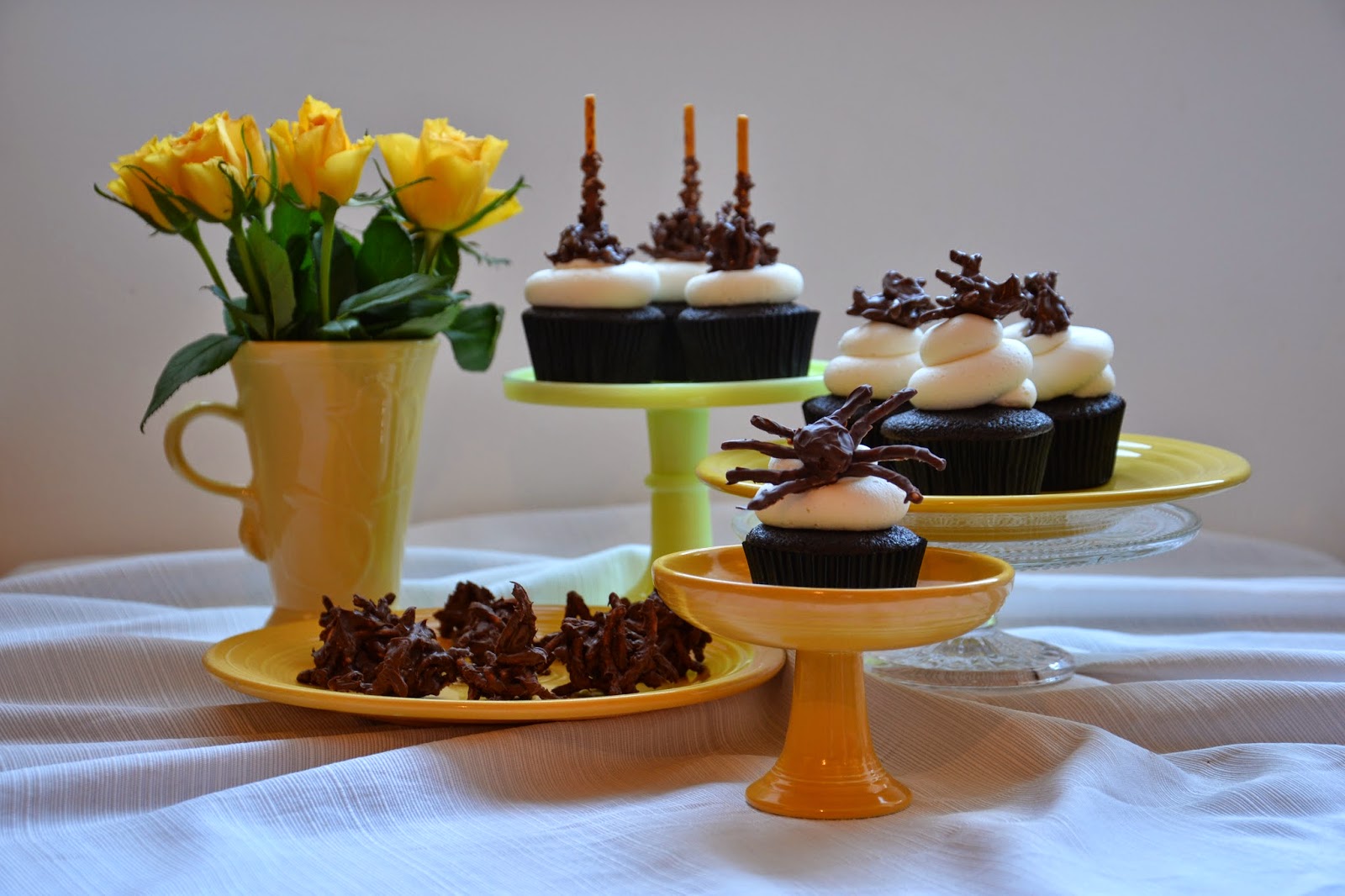 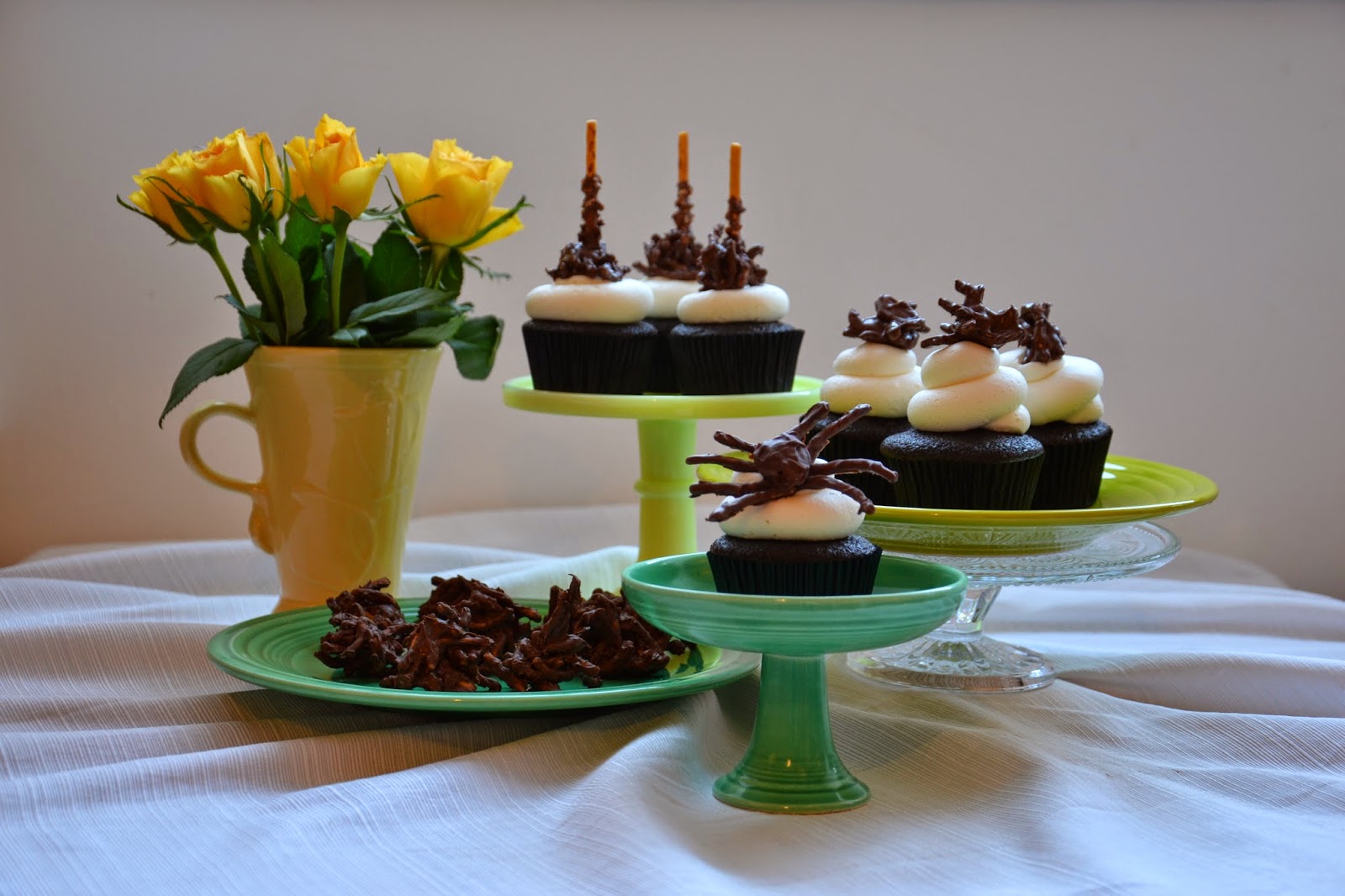 Eventually, I posted the yellow combination on my Instagram. @thesugaryshrink
Once the spider and cupcake topper adventure was played out, I returned to the cake.
I’ve never successfully run a hot knife through little stripes of anything to make lovely streaks or marbling.  I practiced on a plate.  This was such a good idea because I needed to adjust the opening of the piping bag for the chocolate. 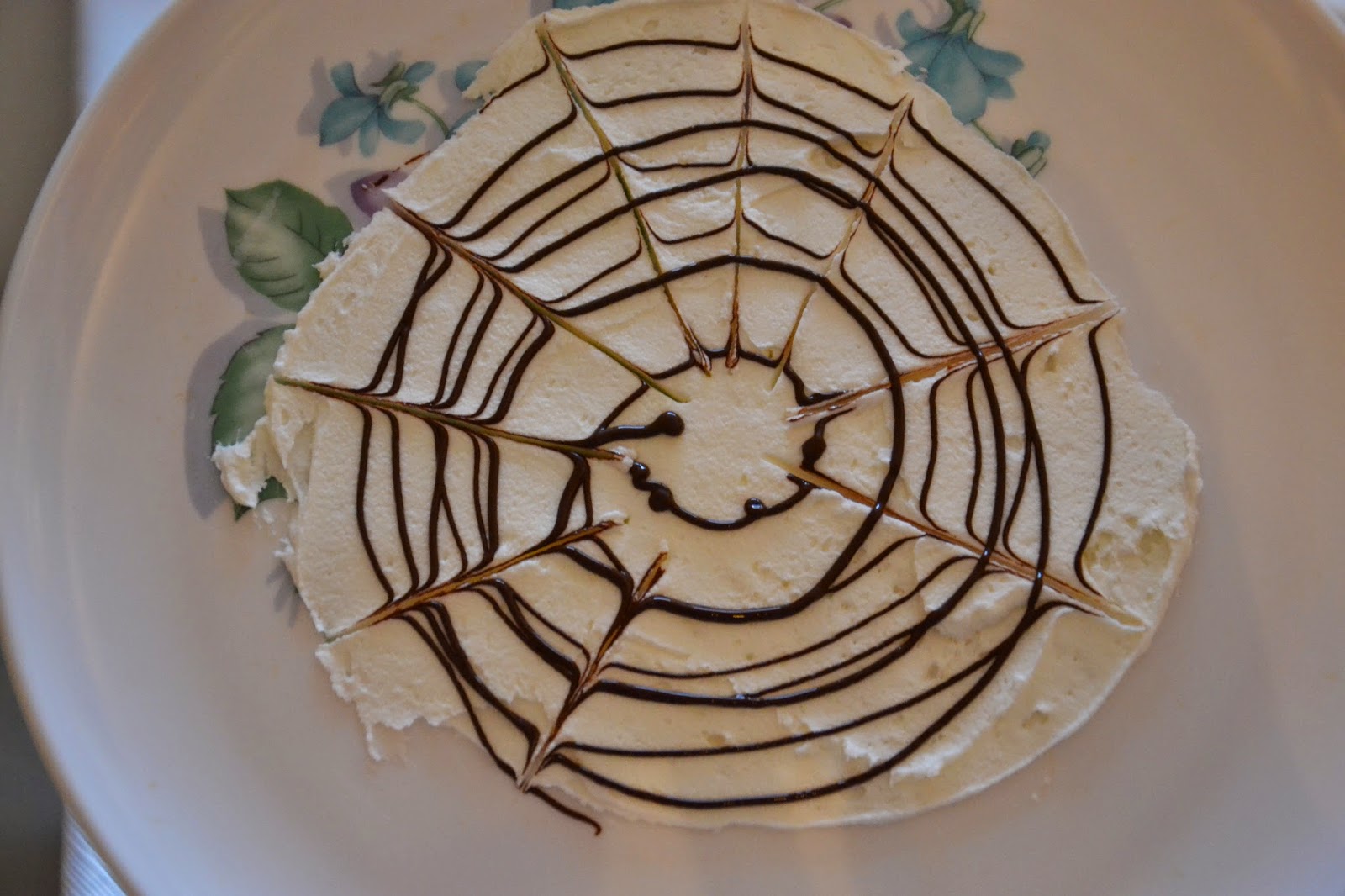 After practicing, I transitioned to working on the cake.  Sometimes, I have such a vision in my head of what I want the cake to look like…that I’m nervous or afraid to try something.  Baking cake has consistently worn down my fear of failure.  I’m grateful that my partner reminds me, “It’s only cake.  You can bake another one.” 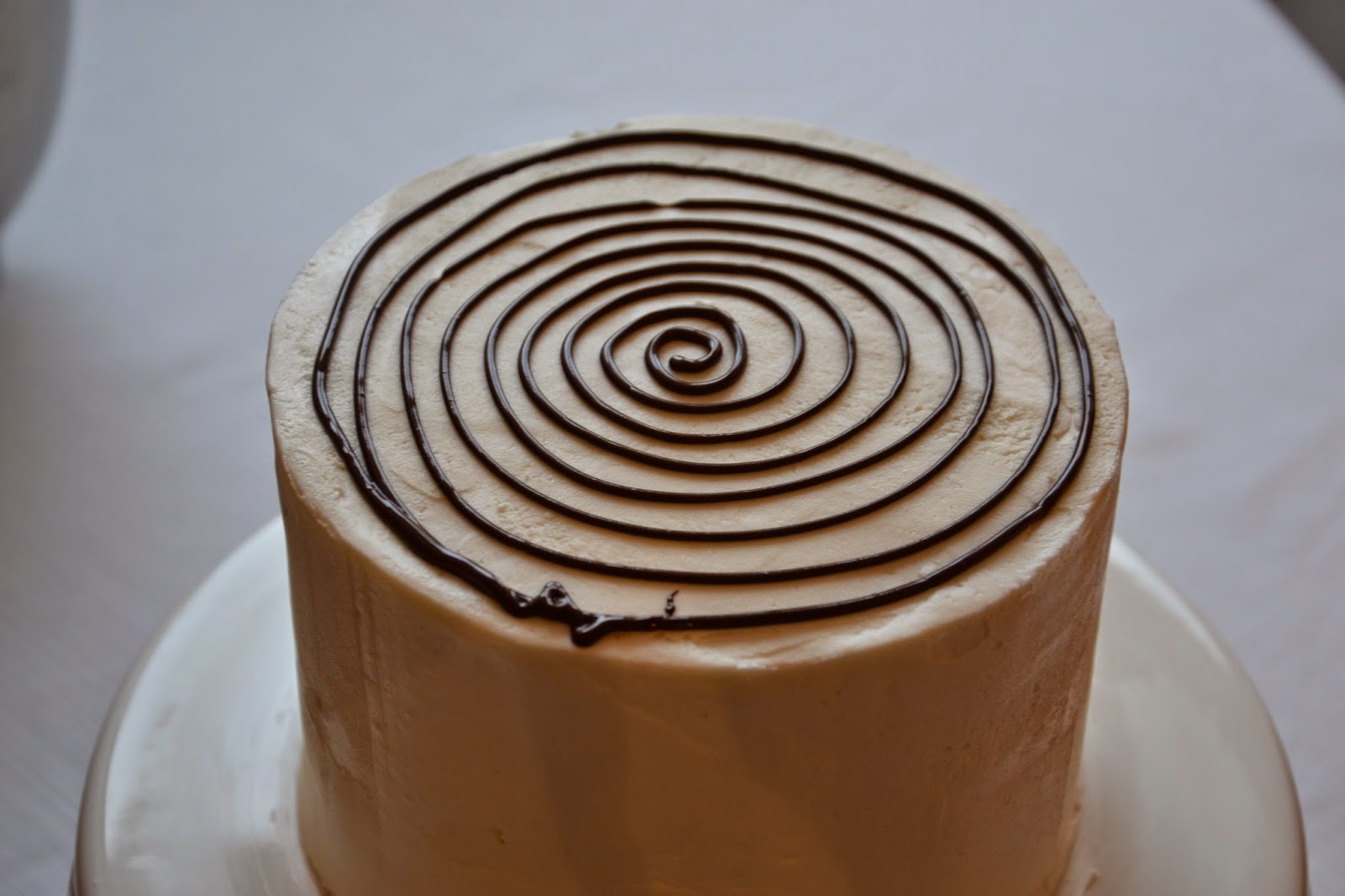 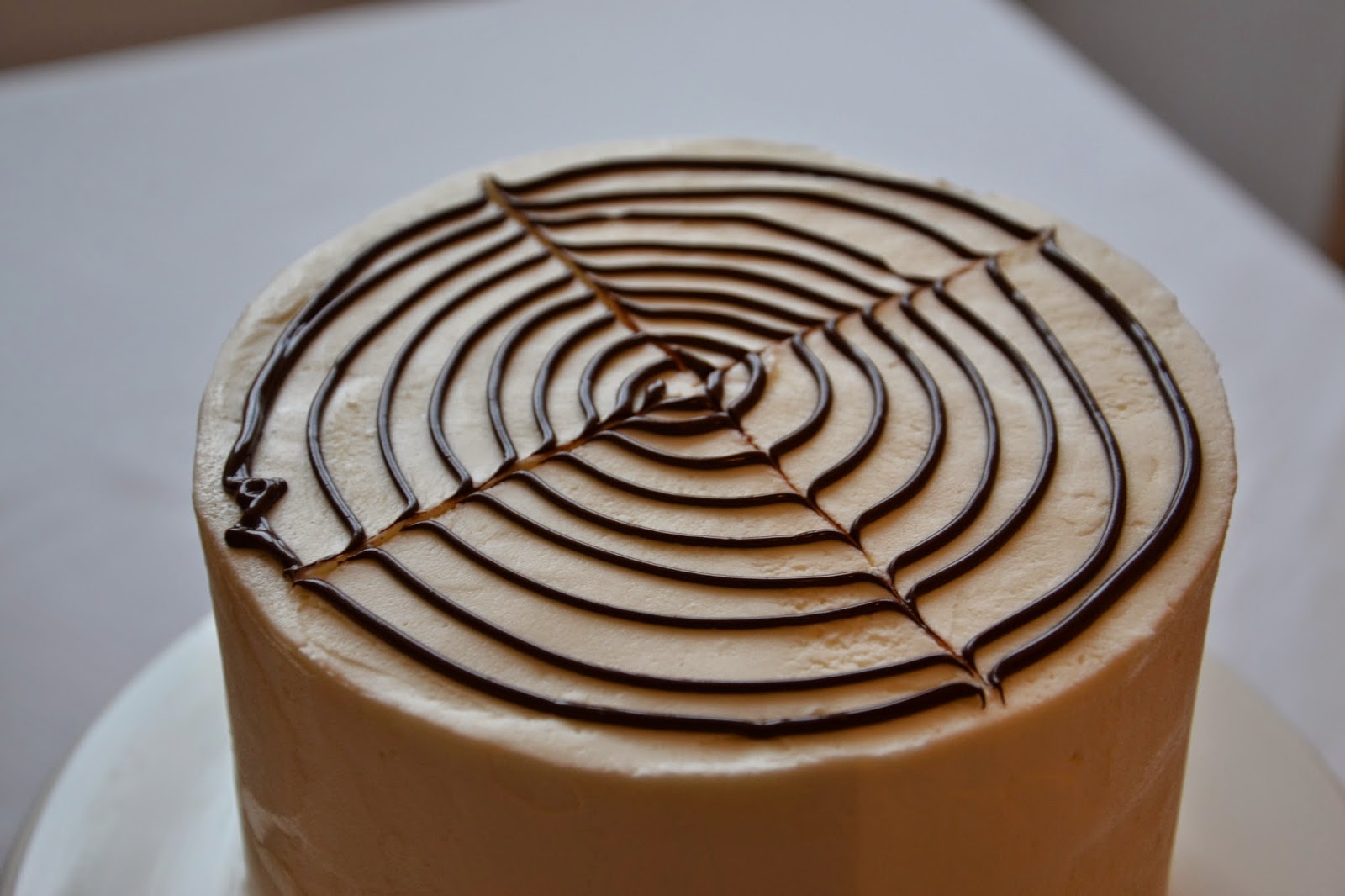 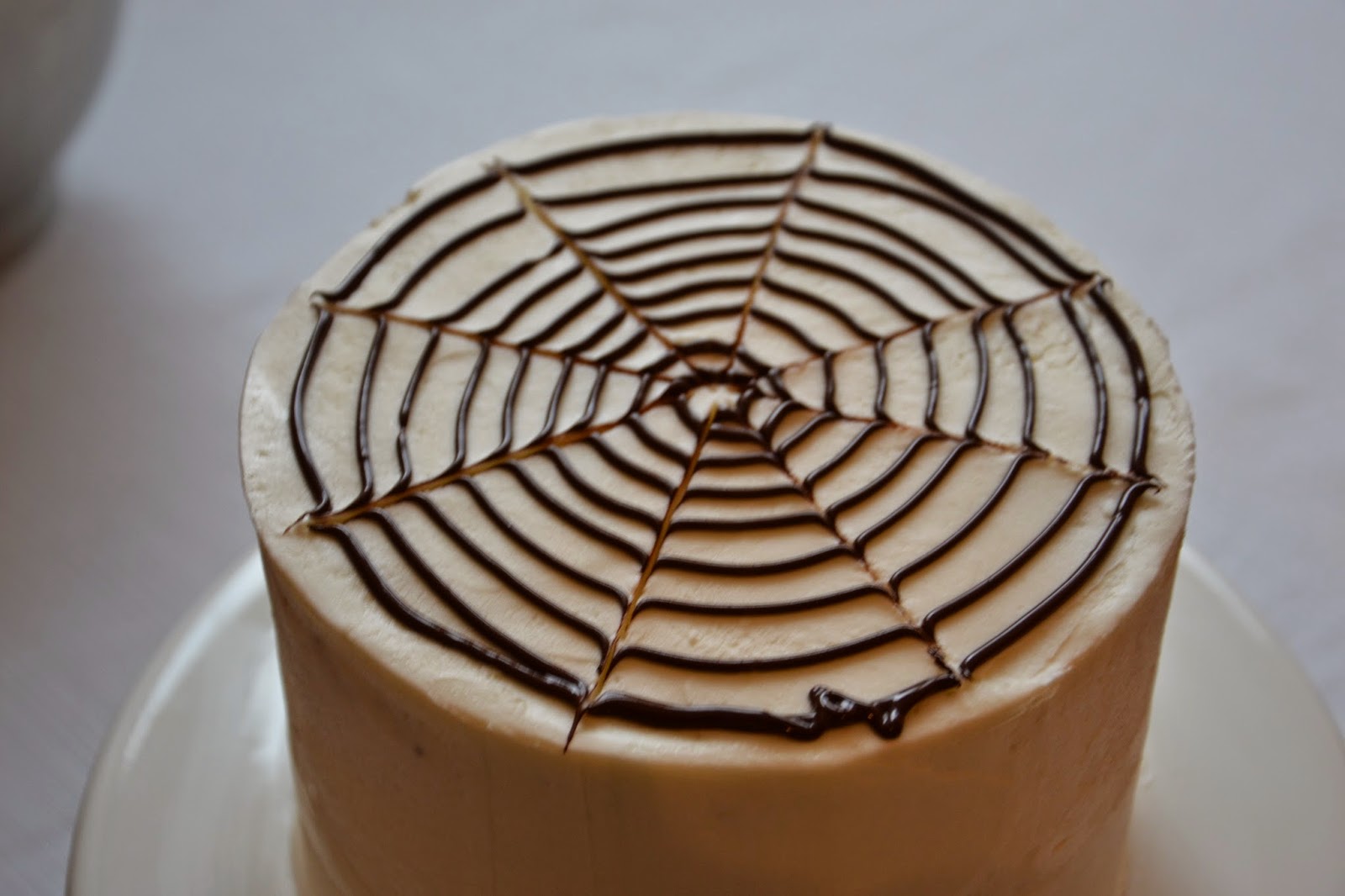 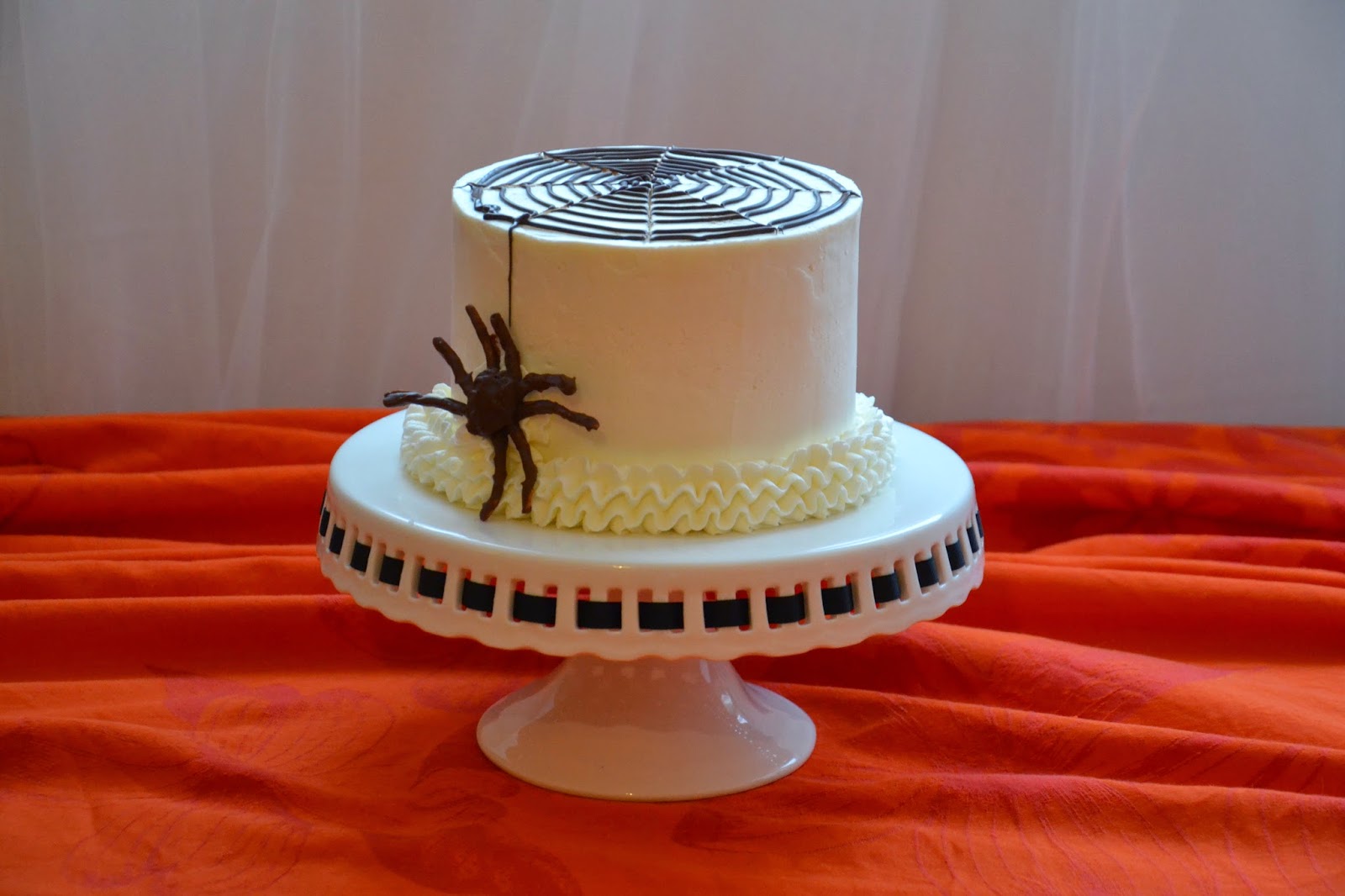 I was so happy with this cake.  It looks like the cake I had envisioned.  The bottom border is Vanilla Buttercream piped through a Wilton 1M Open Star tip.  I added a pillow of buttercream for the spider to rest on – it’s barely noticeable.
When working with a cake on a turntable, I often remind bakers and decorators to “move the cake and not the decorator”.  In the case of this chocolate spiral for the web, the cake needed to stay still while I drew one long line starting at the center.
A style choice … leave the black ribbon bow in back so it wouldn’t draw focus from the spider.  The white of the buttercream and the cake stand were thoughtful decisions.
﻿ 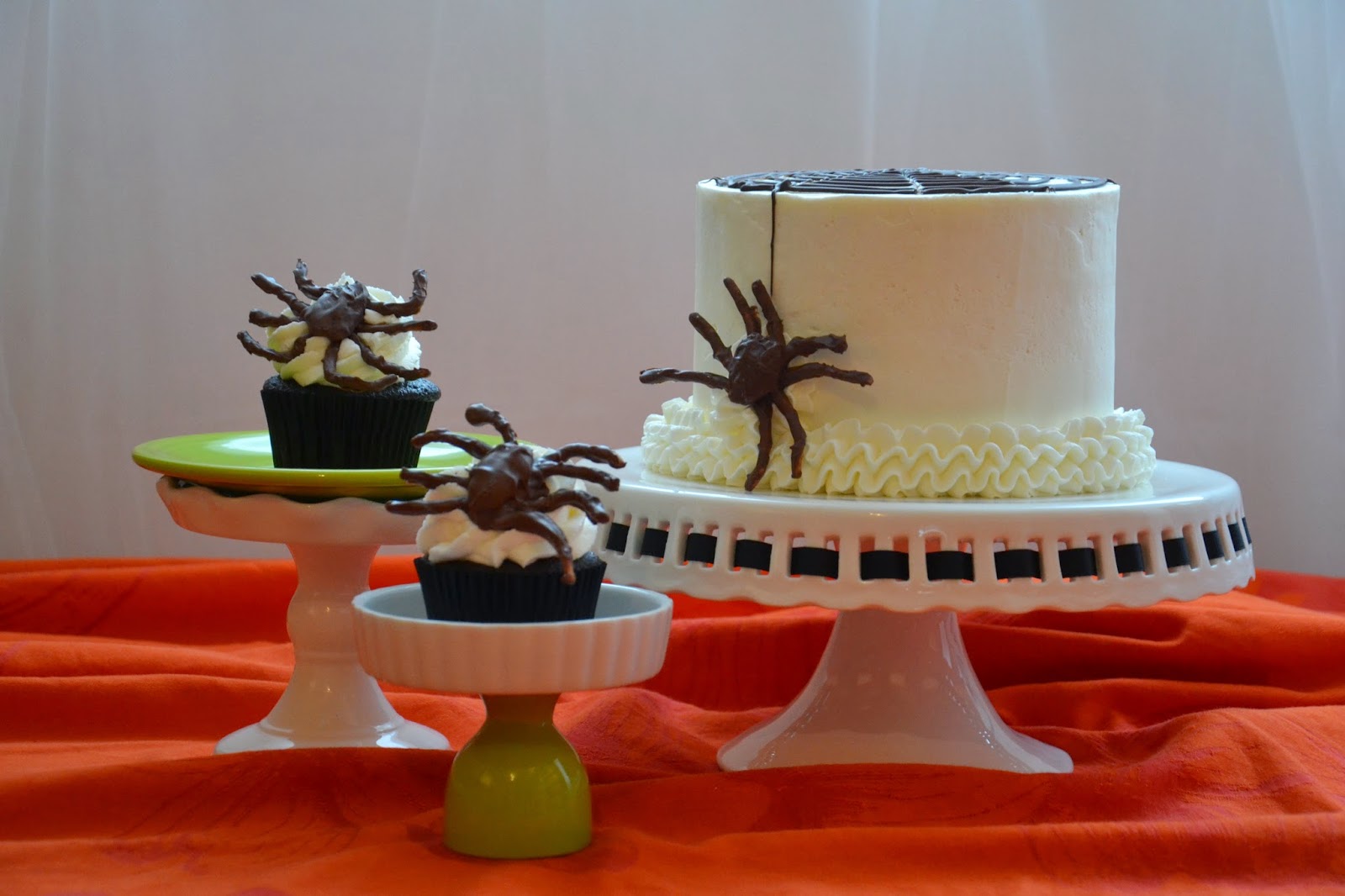 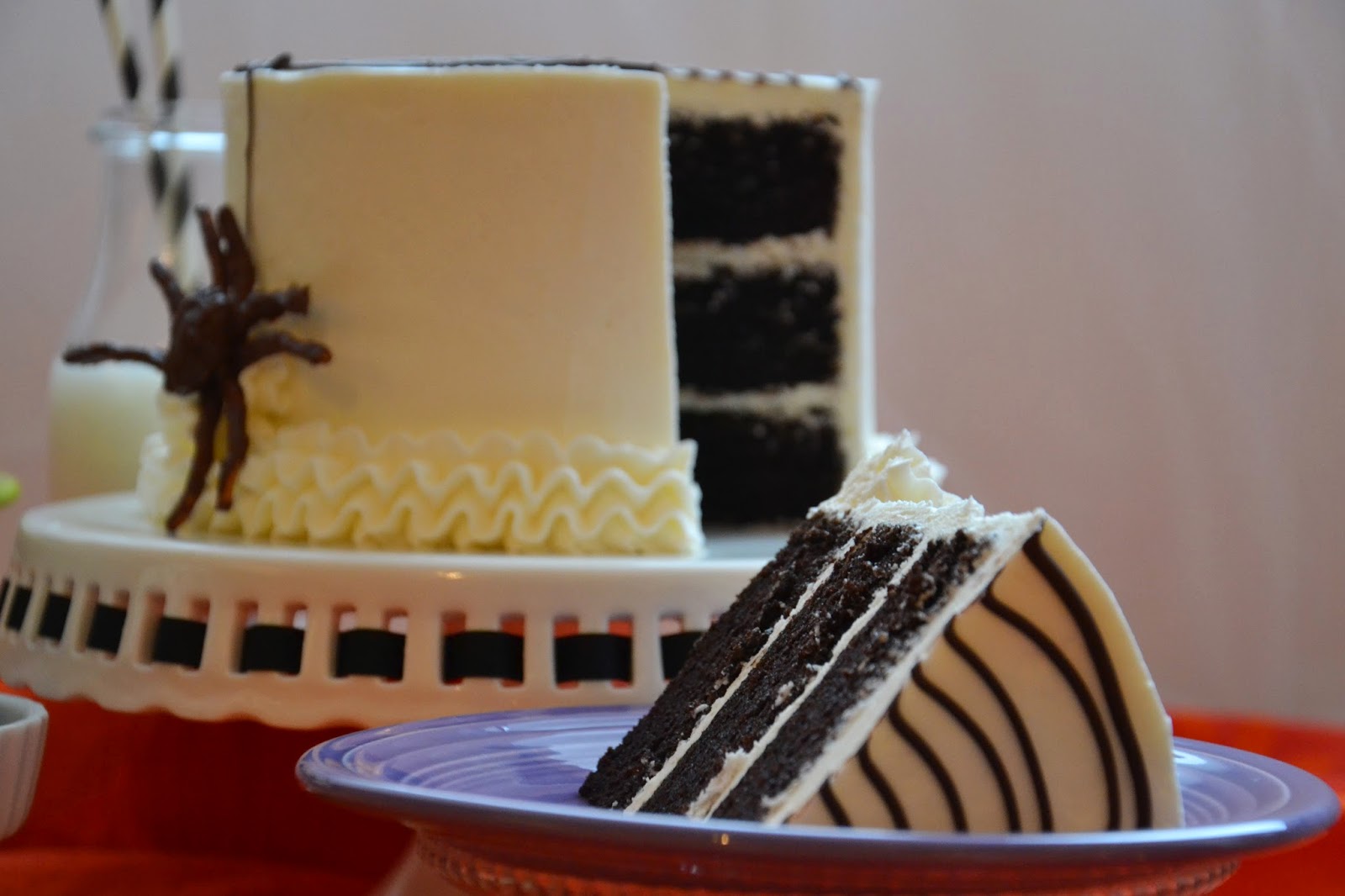 I love the way the black and white cake echoes the black and﻿ white garnish on this cake.  Those even layers and that not exactly perfect web is a terrific pairing.
This was a super fun adventure in baking.  I’m grateful for the opportunity to bake and learn.  My life partner makes this possible for me.  So does sobriety. 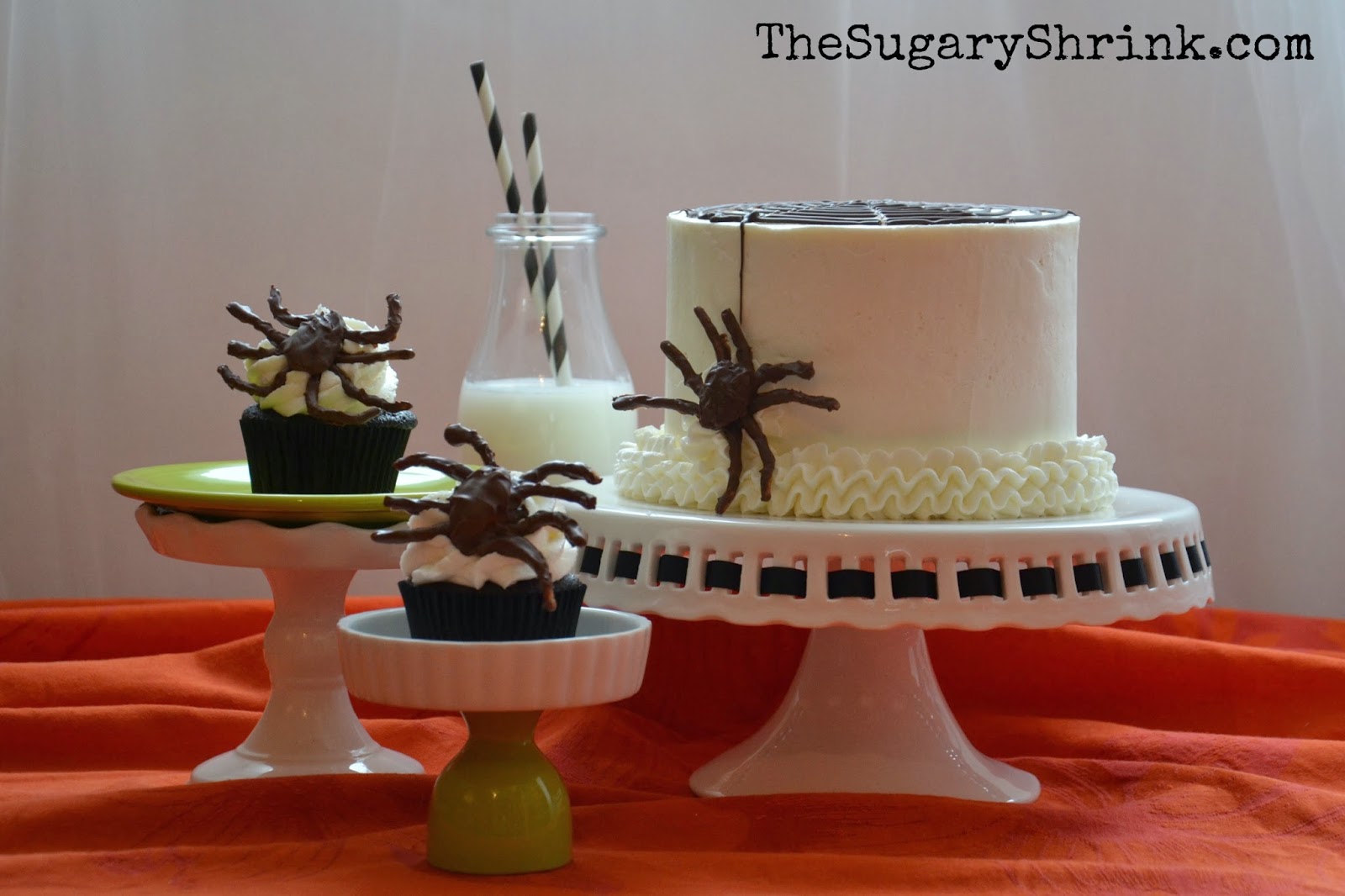