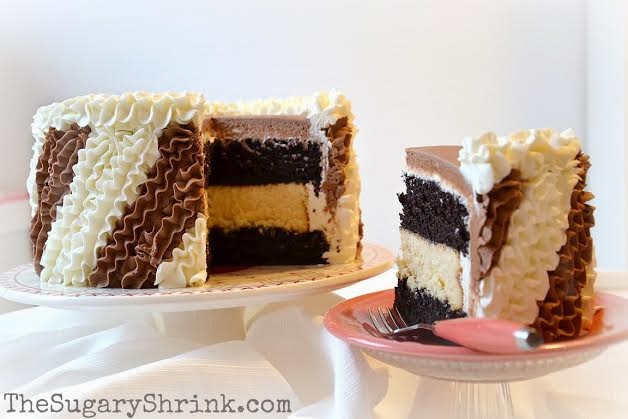 Inspired by my Red Velvet Valentine’s Day Test Kitchen Cake, blogged here, I decided to expand this same idea to one of my favorites…the chocolate layer cake.  Chocolate and Cheesecake go together so deliciously well.
My original idea also included adding strawberry preserves between the chocolate and cheese layers…but decided to save that for the next attempt.  I think the added color and flavor will be a lovely bonus (maybe even add some strawberries to the buttercream).

I treated myself to an 8″ spring-form pan! Woot.  However, German pans are produced and sold by centimeters…so it isn’t exactly eight inches.  The slight gap was filled with vanilla buttercream (as part of the crumb coat – so it was no big deal.  I love working with the right equipment…”the right tool for the right job.”  Part of the Measure Twice, Cut Once life-lesson manual.

Since I didn’t pour all of the cream cheese cake better into the pan, leaving out perhaps…1/2 cup?, I decided to bake little cream cheese cake pops using my favorite Nordic Ware pop pans.  It’s what I use for the Polka Dot Cake.  I know the cream cheese isn’t going to rise, but wanted to be prepared in case it did a little bit. I baked them only 15 mins, and they held together nicely.

Anyway, with a dozen half-moons, I popped them into the cupcake batter after it was poured into the prepared pan.  A chocolate cupcake with a cheese cake center….now that sounds yummy.  I loved how they turned out, just a wee bit of a surprise in the center. 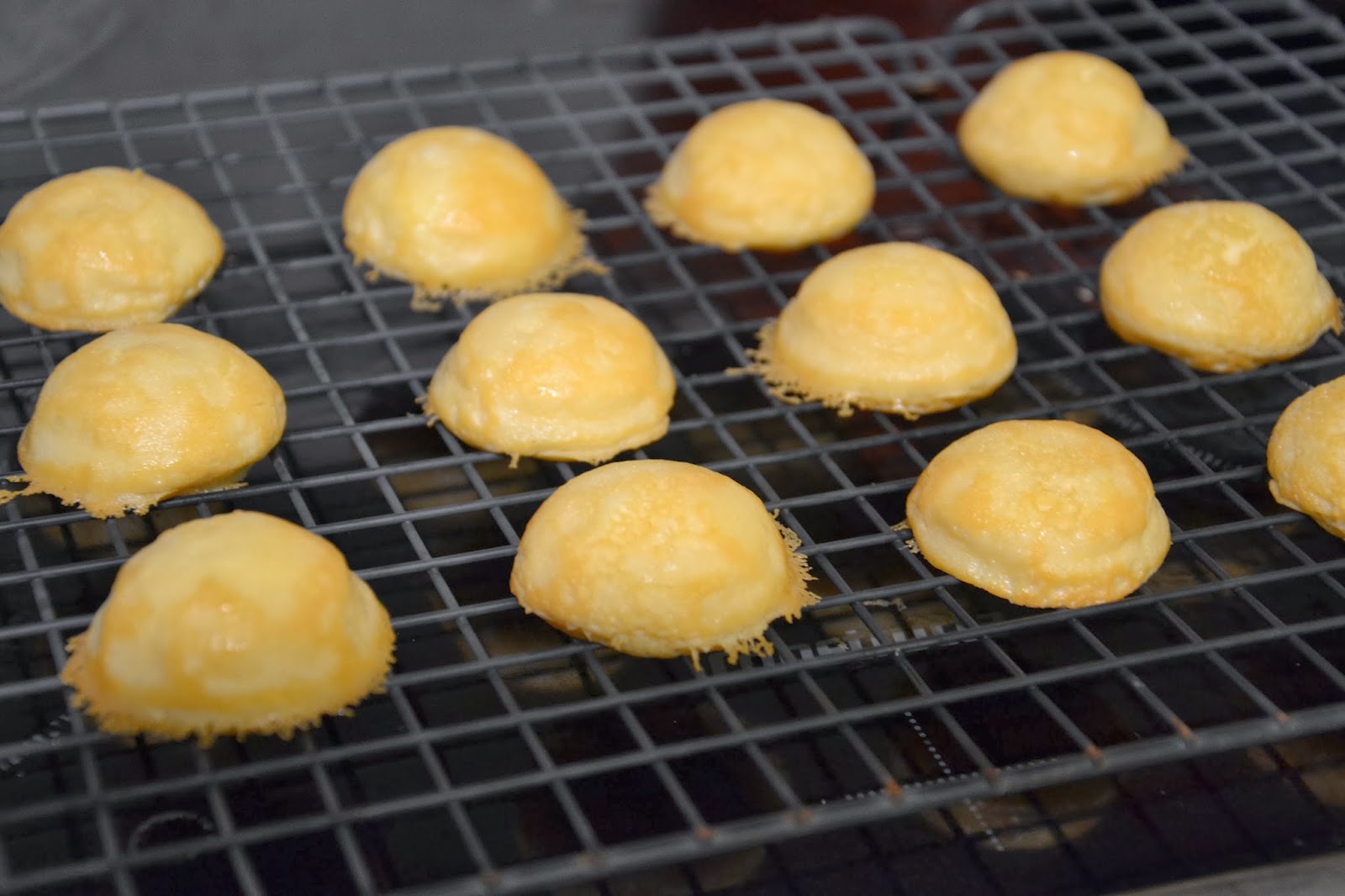 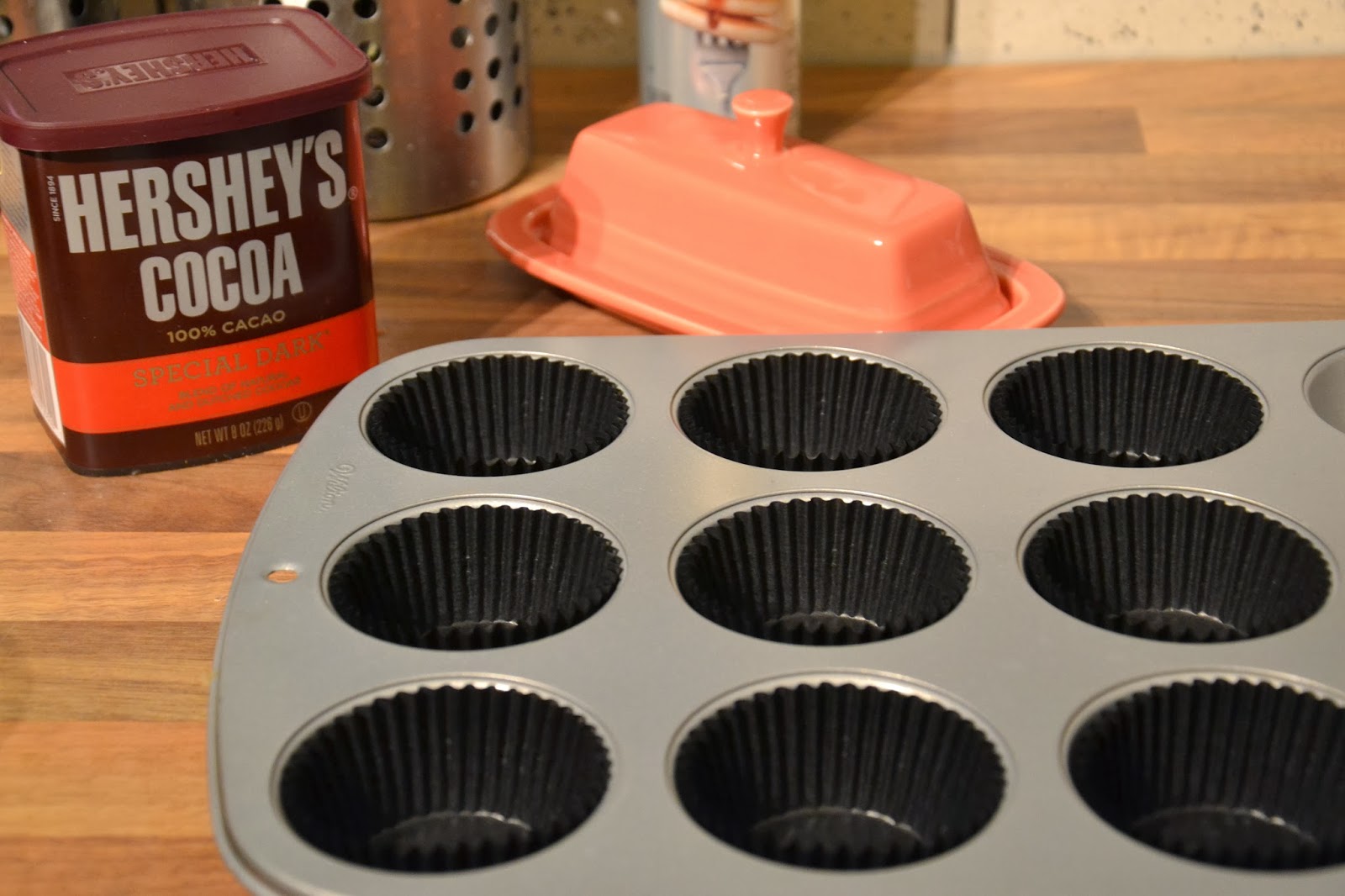 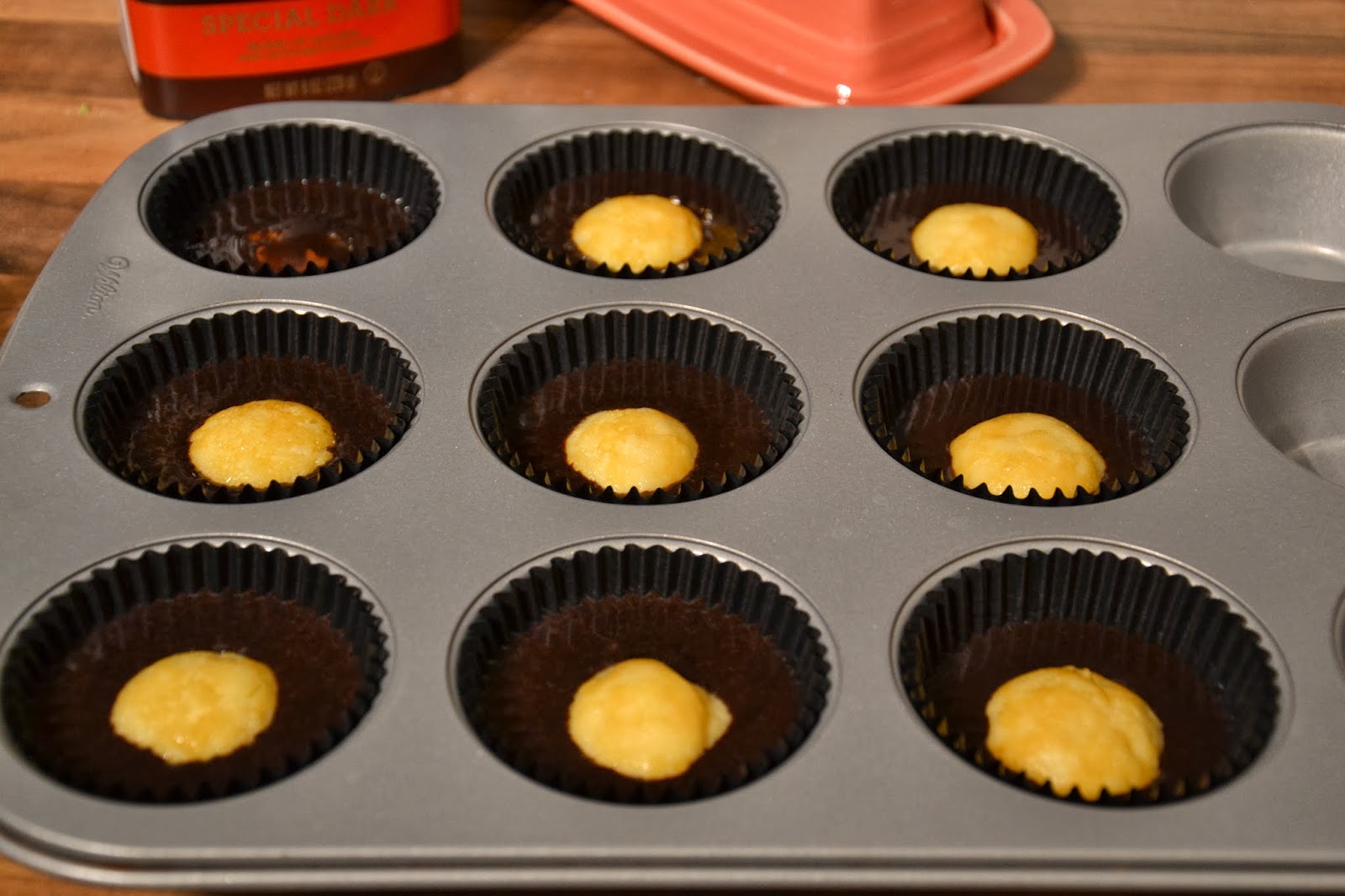 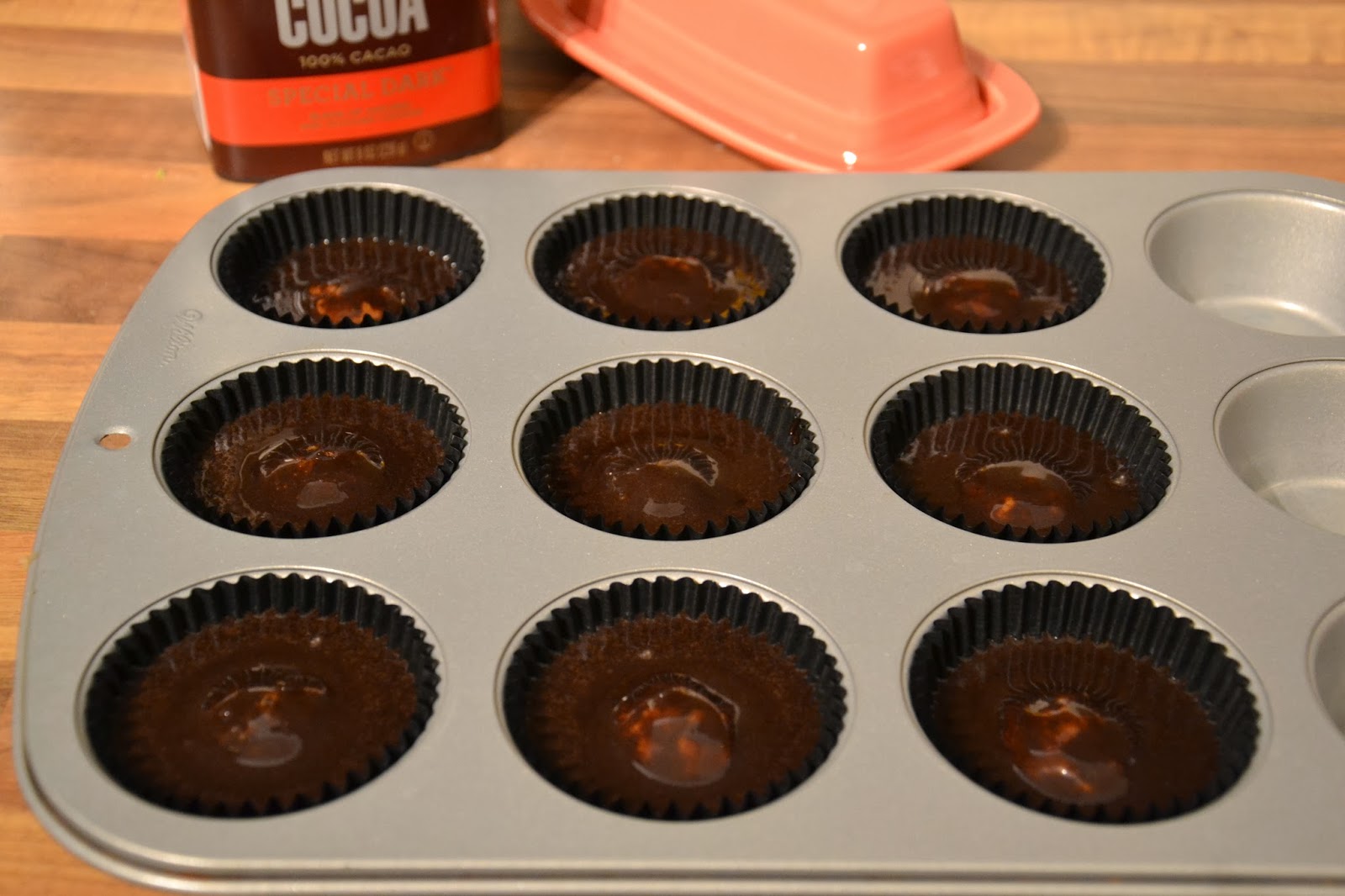 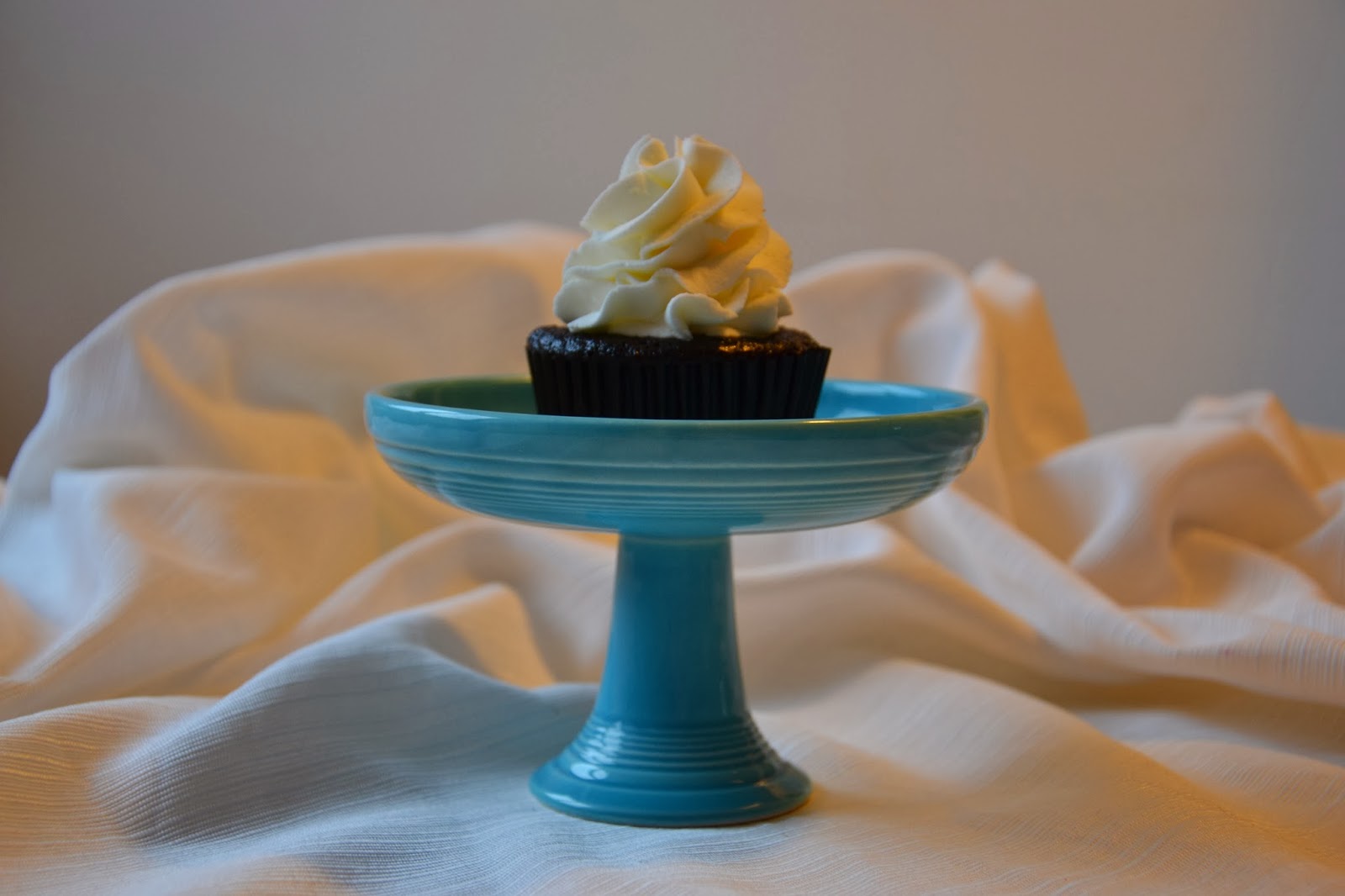 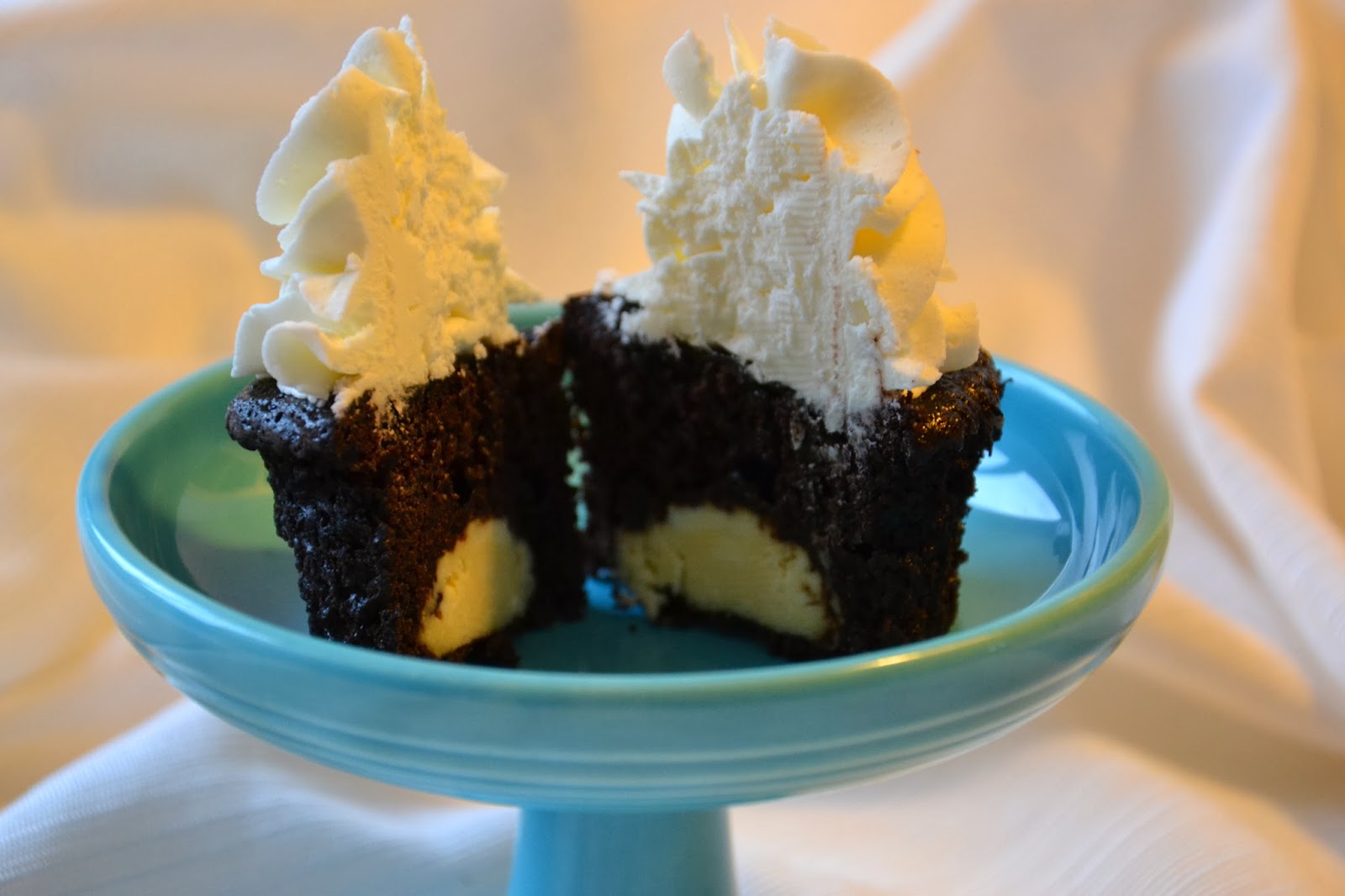 Small hiccup… the center of one round sunk a tiny bit.  A fix around for this… when the cupcakes first came out of the oven, I immediately took the dome off one and pressed it into the sunken center.  Handling the cupcake sounds like me muttering “hot hot hot hot.”  But the results…an even layer at the expense of the sacrificial cupcake.  This is a technique I learned when using the Wilton Heating Core – the cone sits in the center of 10″ or larger rounds during the baking with the cone filled with cake batter.  When out of the oven, immediately remove the cone, allow the center to spill out, and place in the cone shape open in the cake.  Because it’s still so hot, the cake knits together. 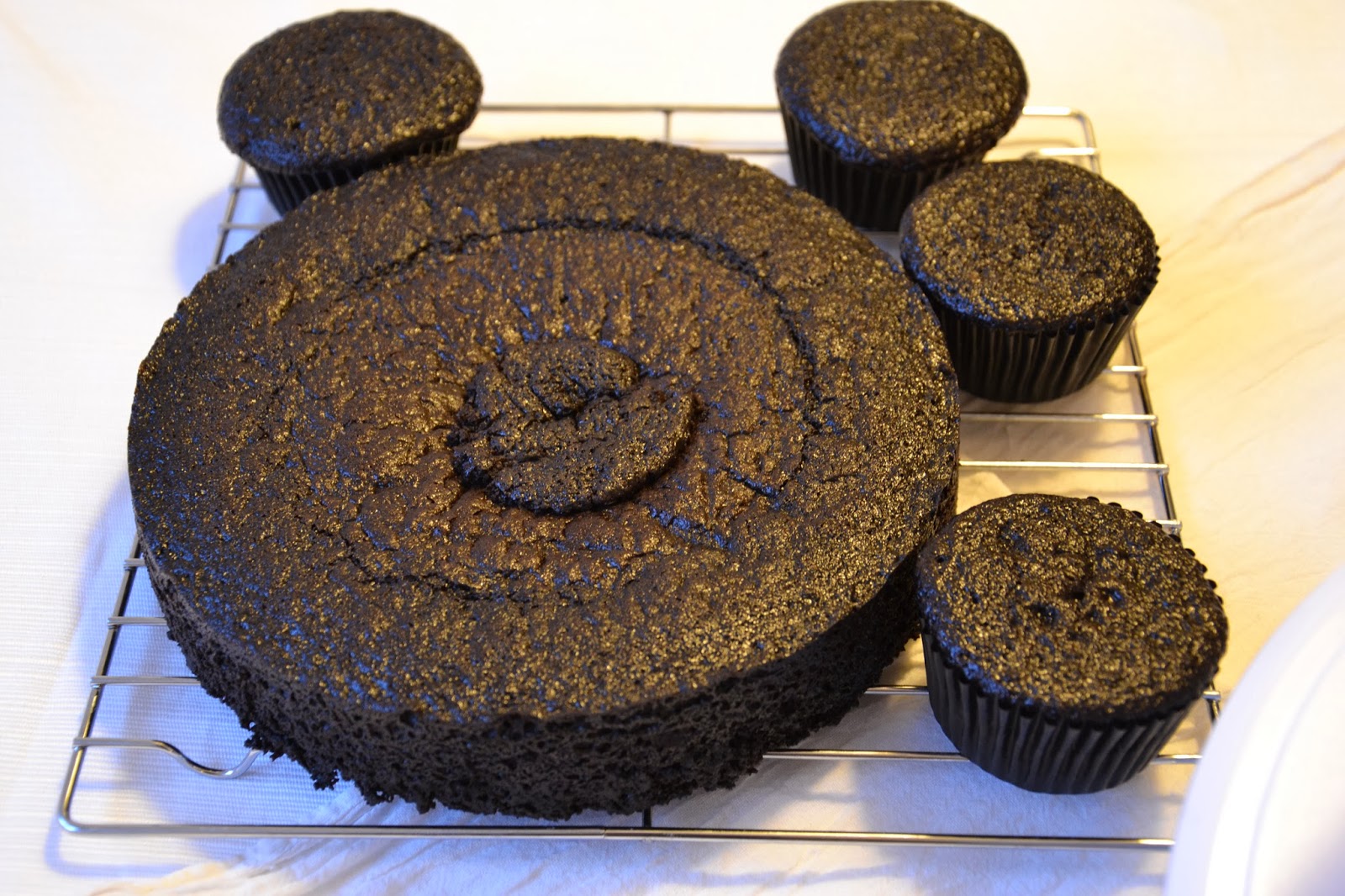 The cake was an easy build: layers and then a crumb coat. 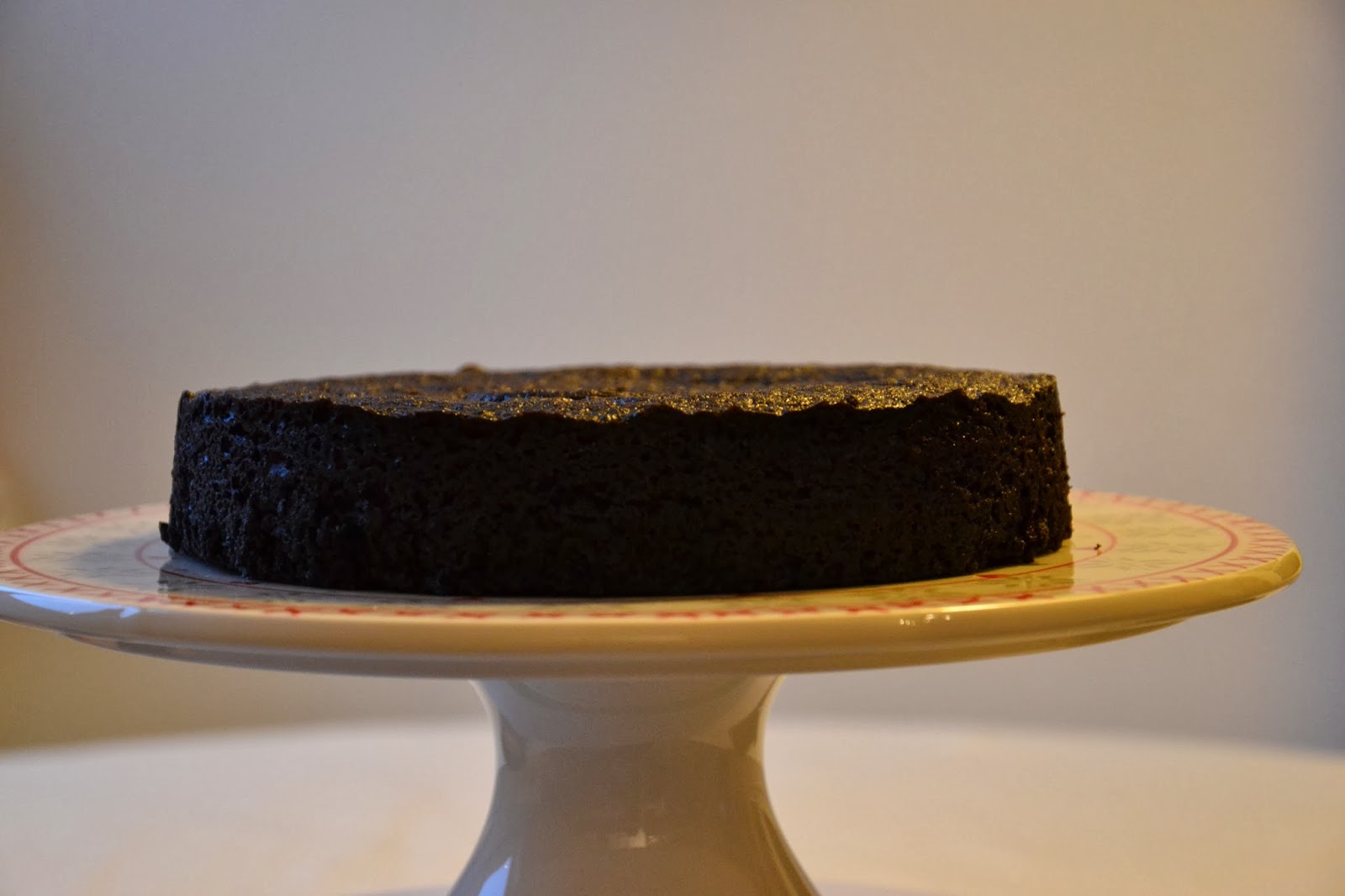 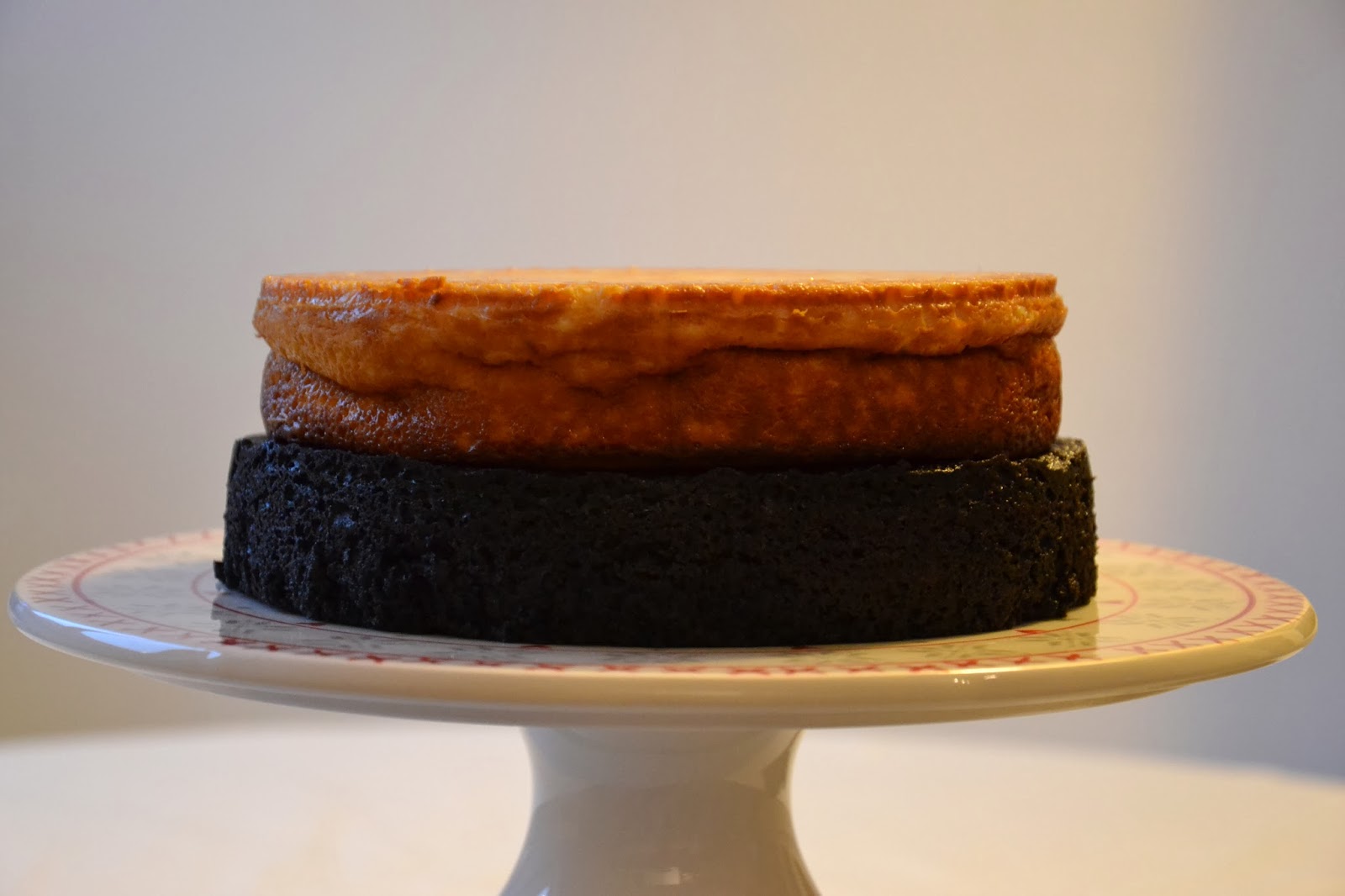 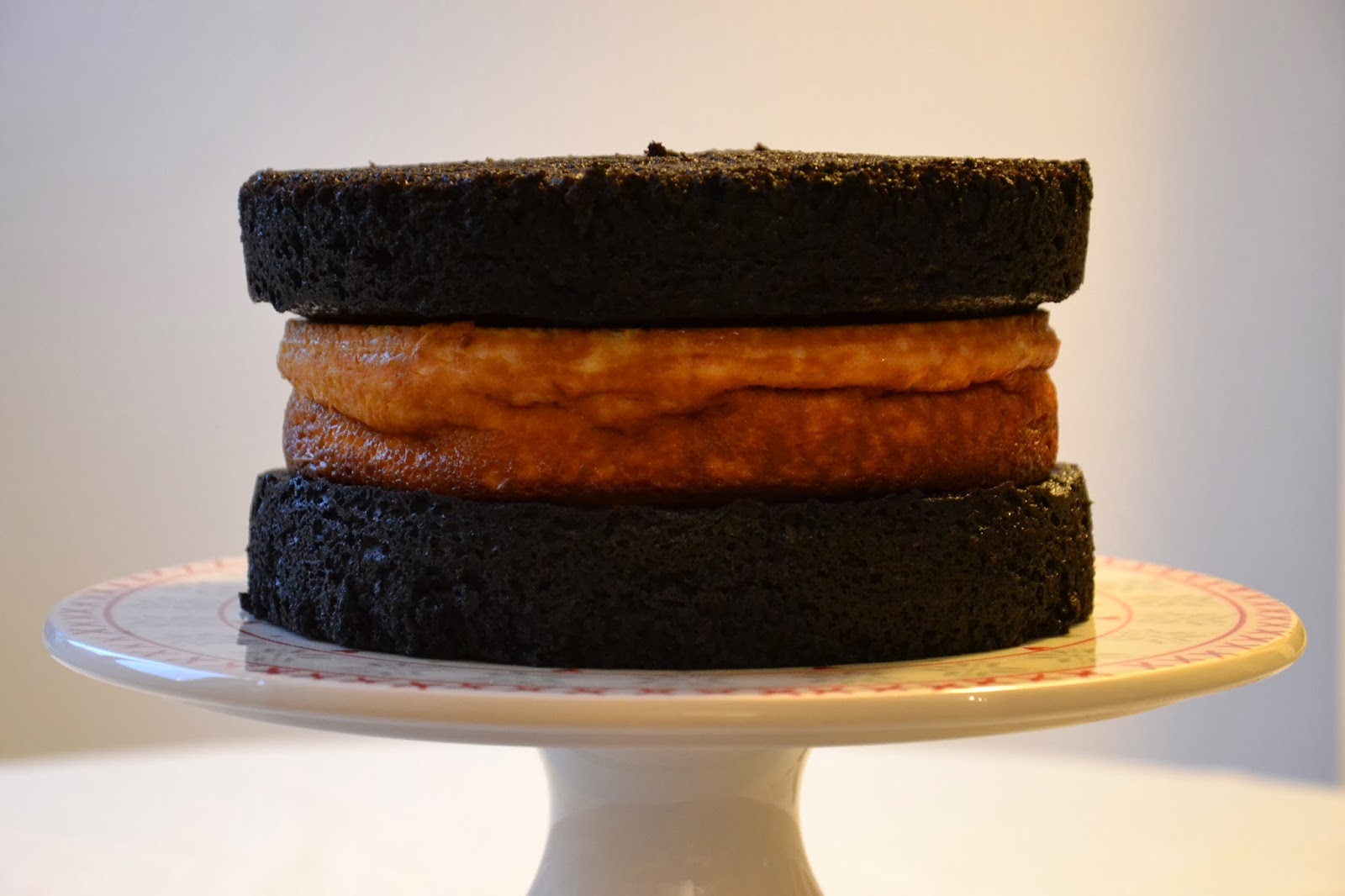 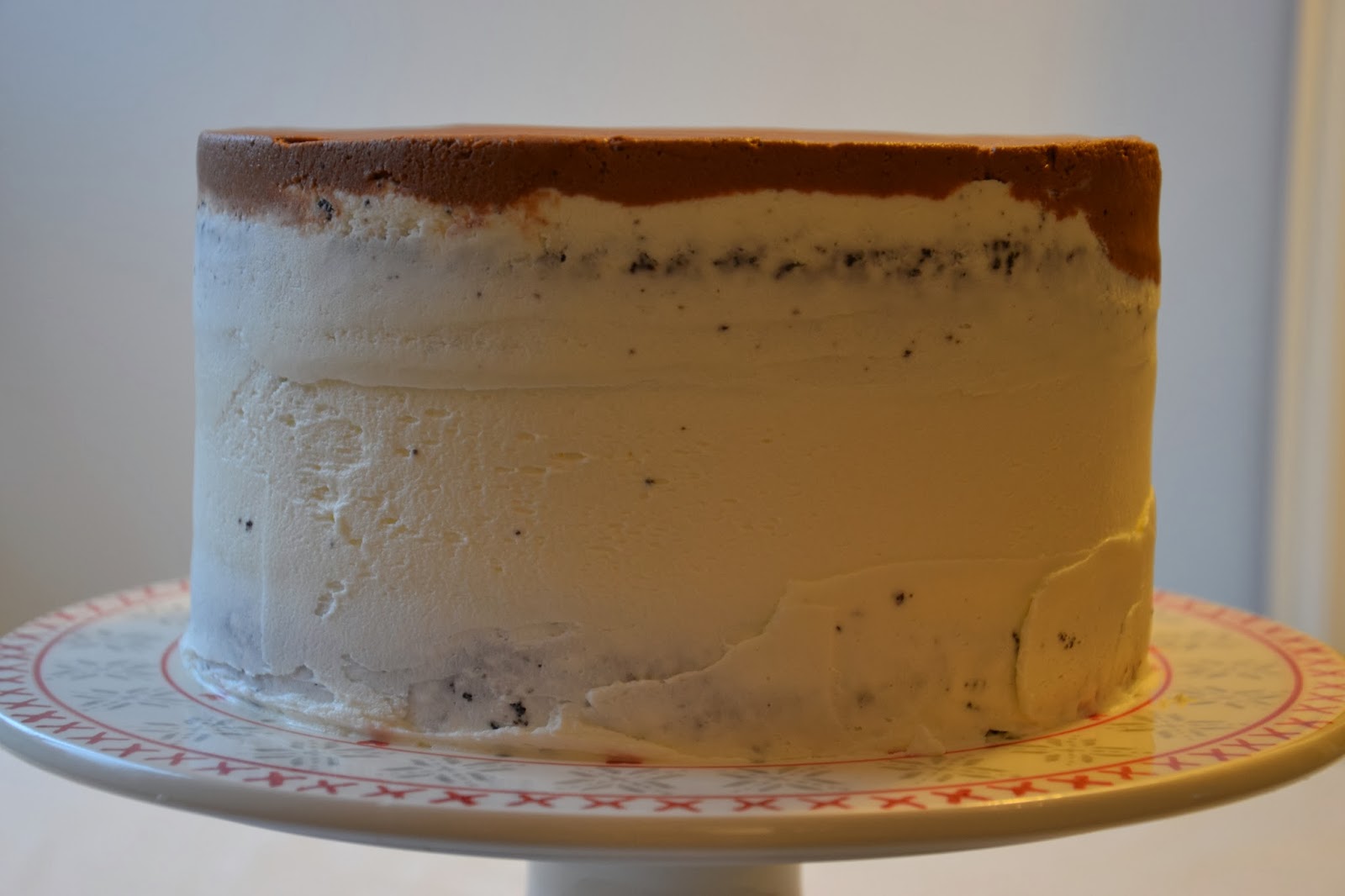 After letting it set in the fridge, I finished the top with a smooth layer of whipped chocolate ganache.  For this cake I decided to add some of the vanilla buttercream; the taste was quite lovely.  Once the top was finished, I scored the upper and lower edge of the cake to help reduce some of the potential wonkiness in the angle and spacing of these buttercream curves. 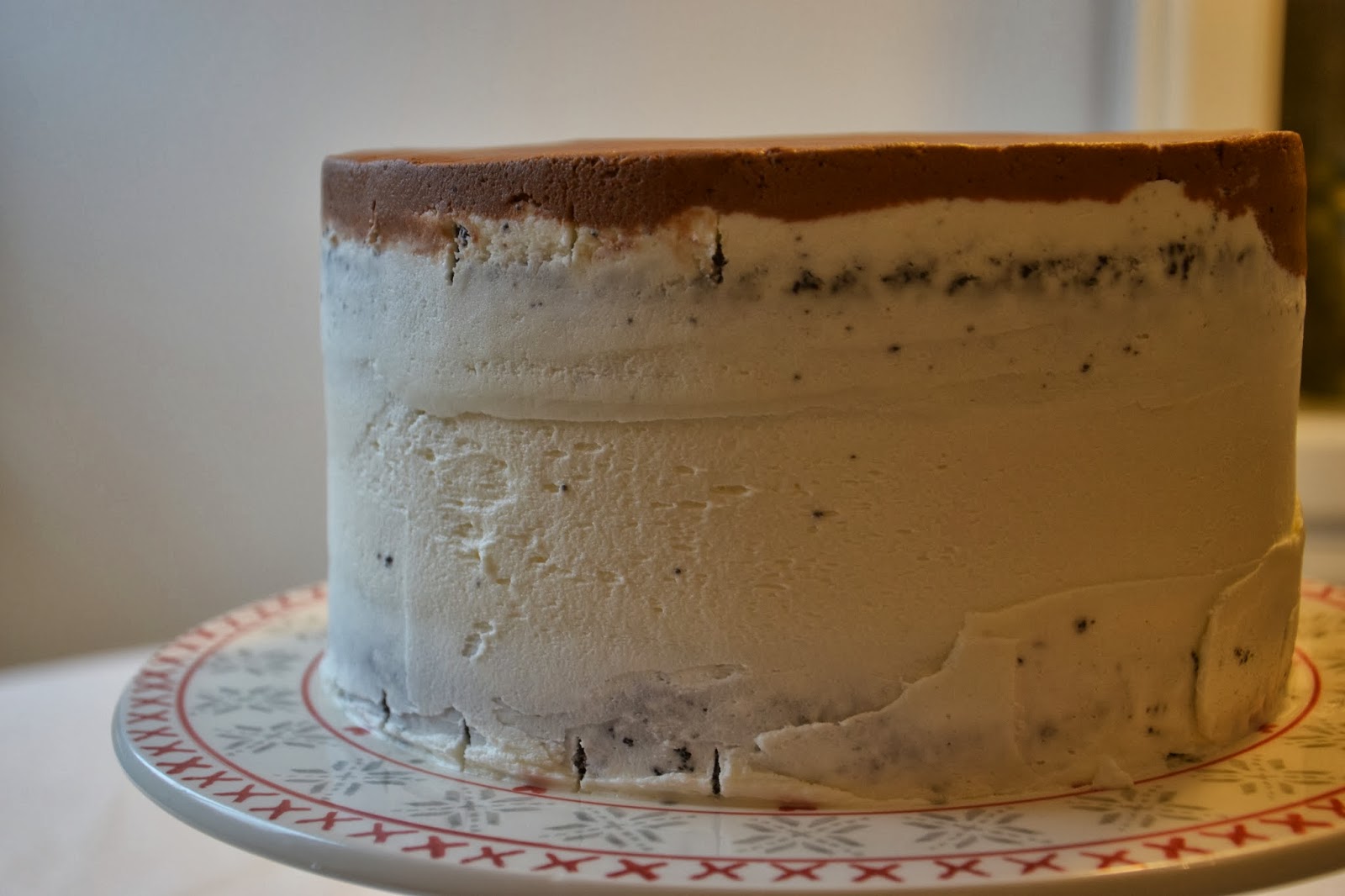 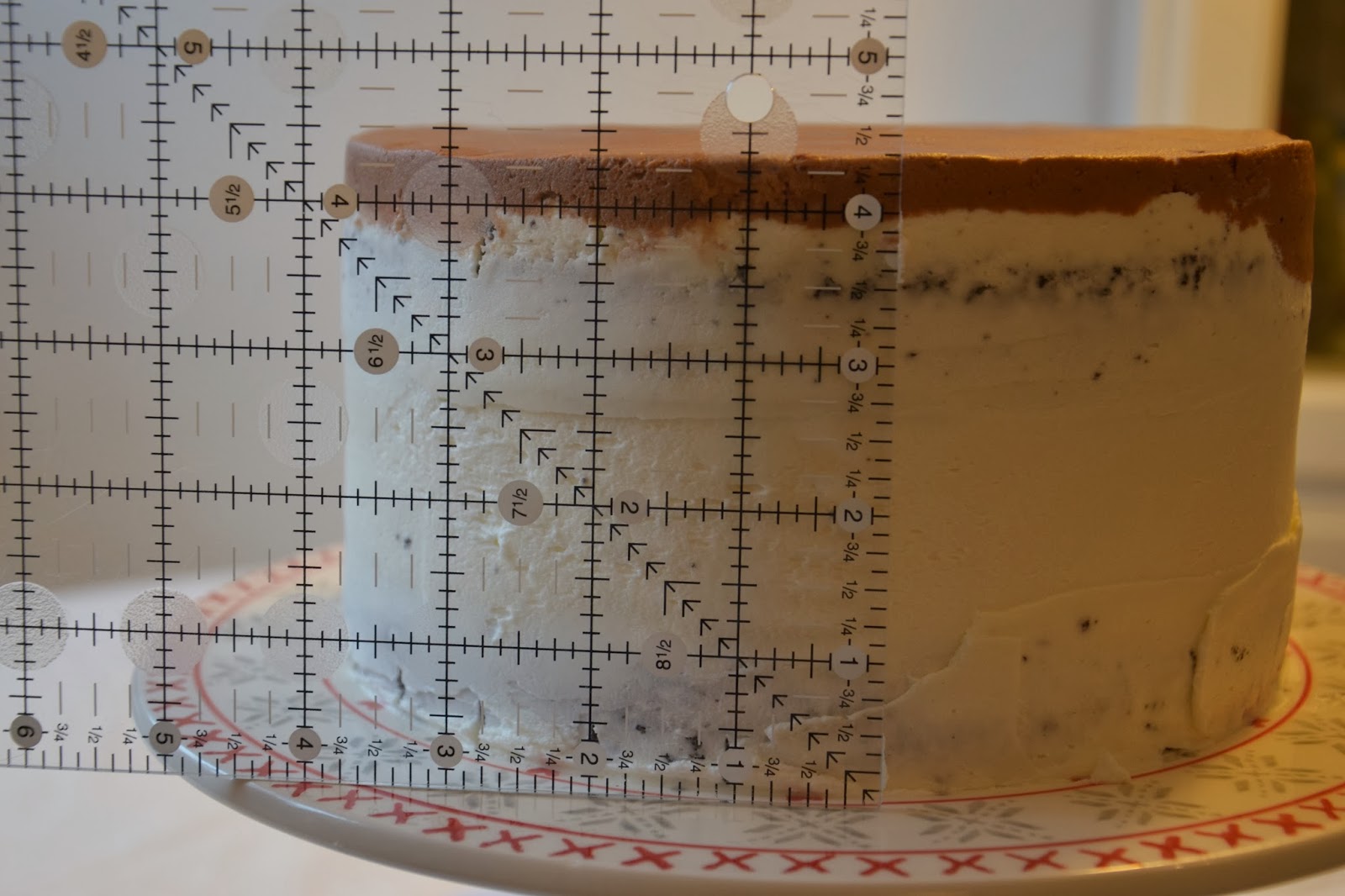 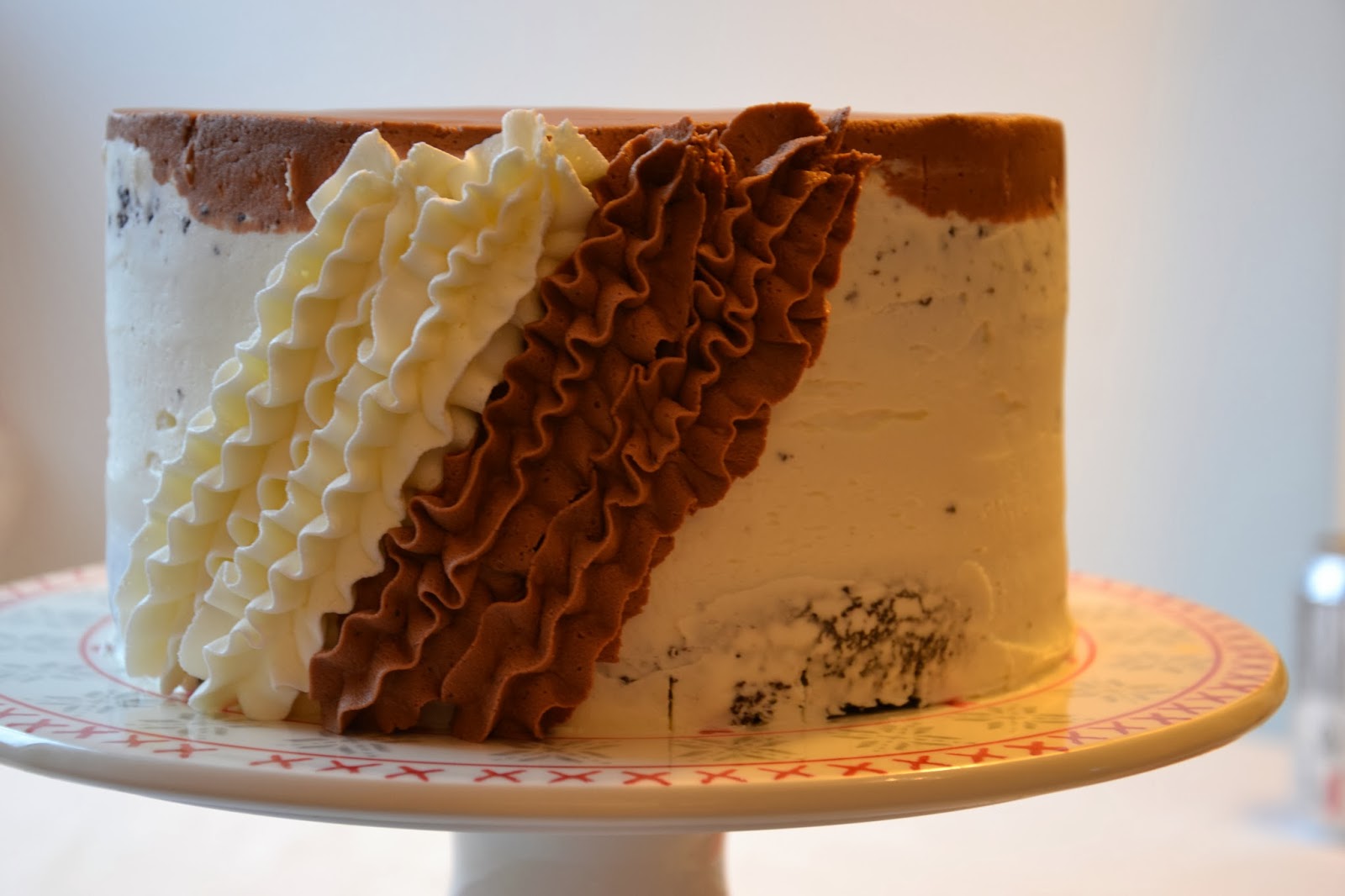 The design for this cake came to me as I was waking up…I immediately saw the curves in black and white and knew it would be interesting juxtaposed against the black and white cake layers.  I wanted curves and angles and symmetry.  I pressed into service one of my quilting straight edges and scored the top and bottom at 1″ increments.  This gave me a start/stop point for the stripes.  I opted for two stripes of each color – thinking the single stripes might be too close to crazy eye.  But, next time I can switch things up. 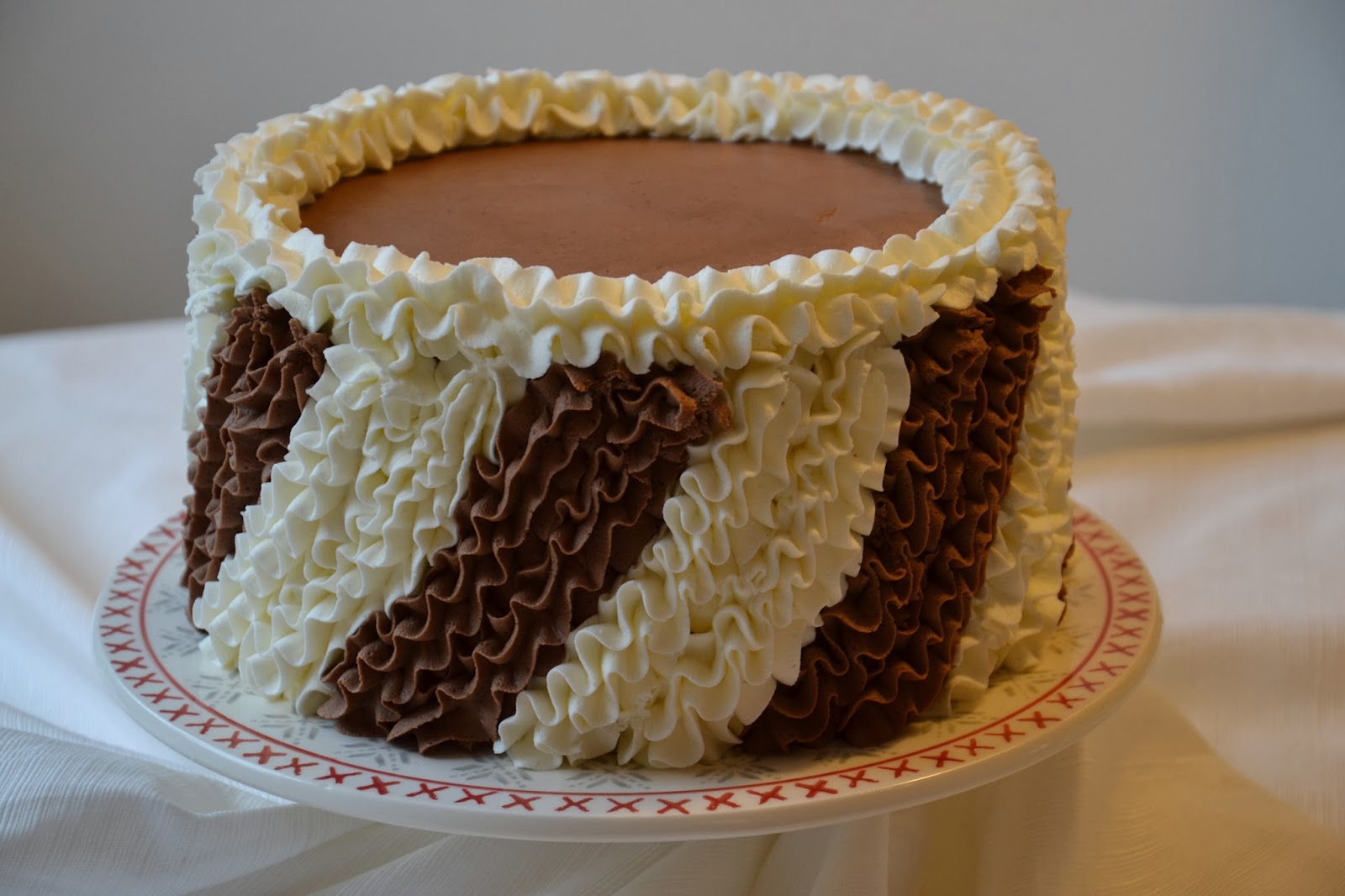 I was really happy with the results of this cake.  It looks very close to what I had in my mind.  And I do love the way the twisting curves look when sliced vertically “no two bites the same.” 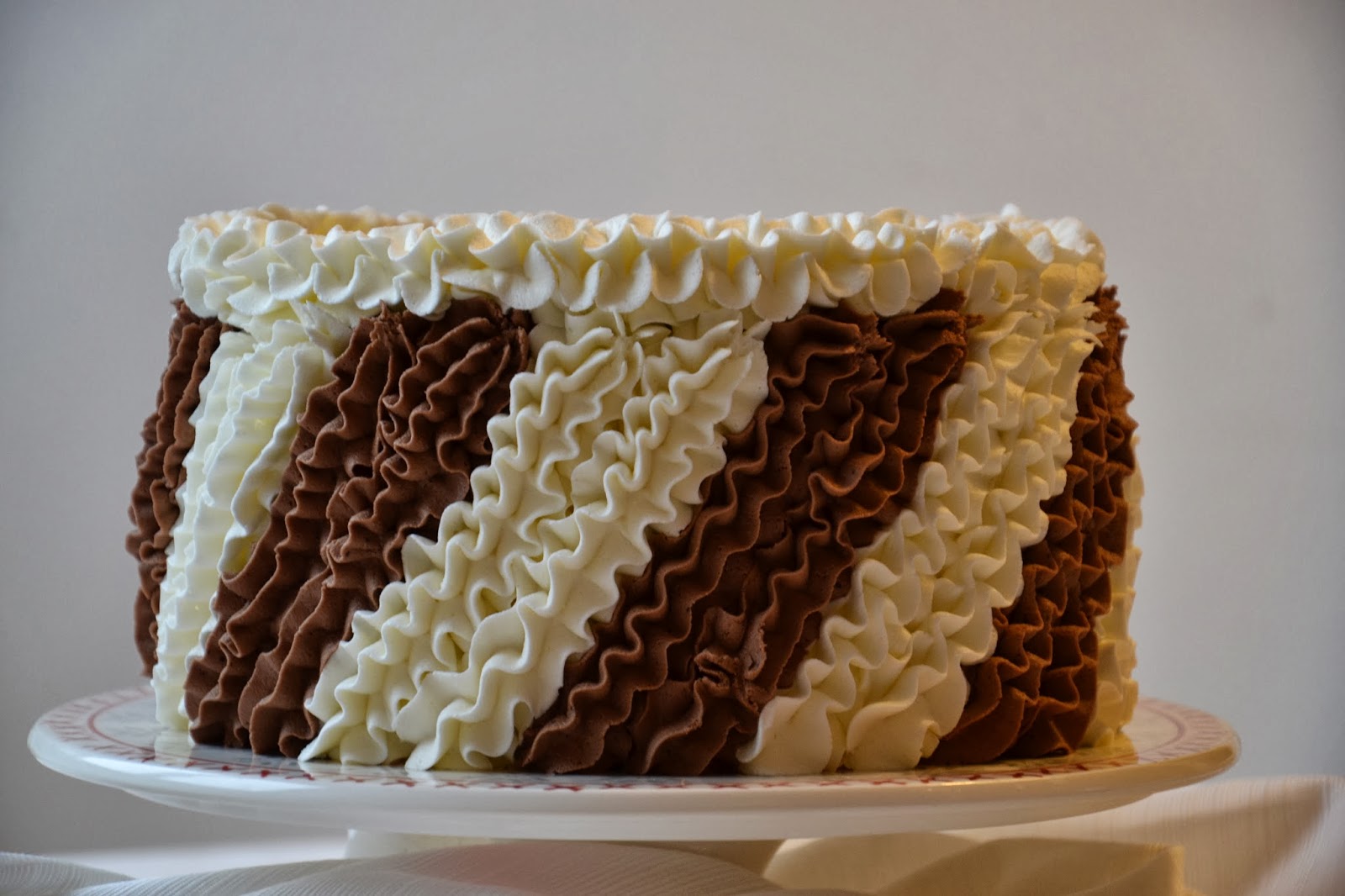 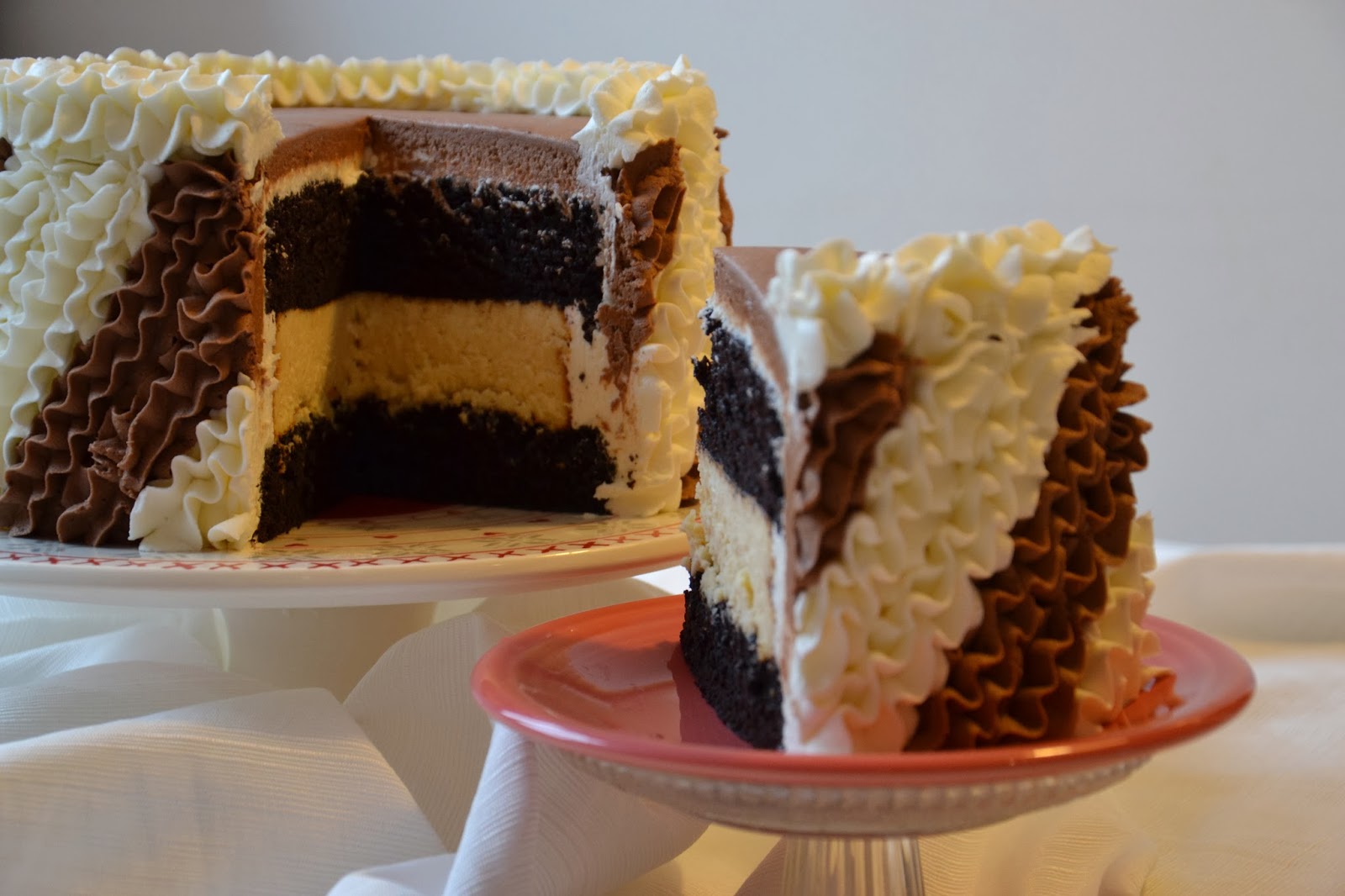 When sliced, I was happy with how the cake held together (and no sunken centers).  Adding strawberries might look very pretty.

A few friends dropped in while I was decorating this cake; it was great to have them here and I loved sharing a slice with them. 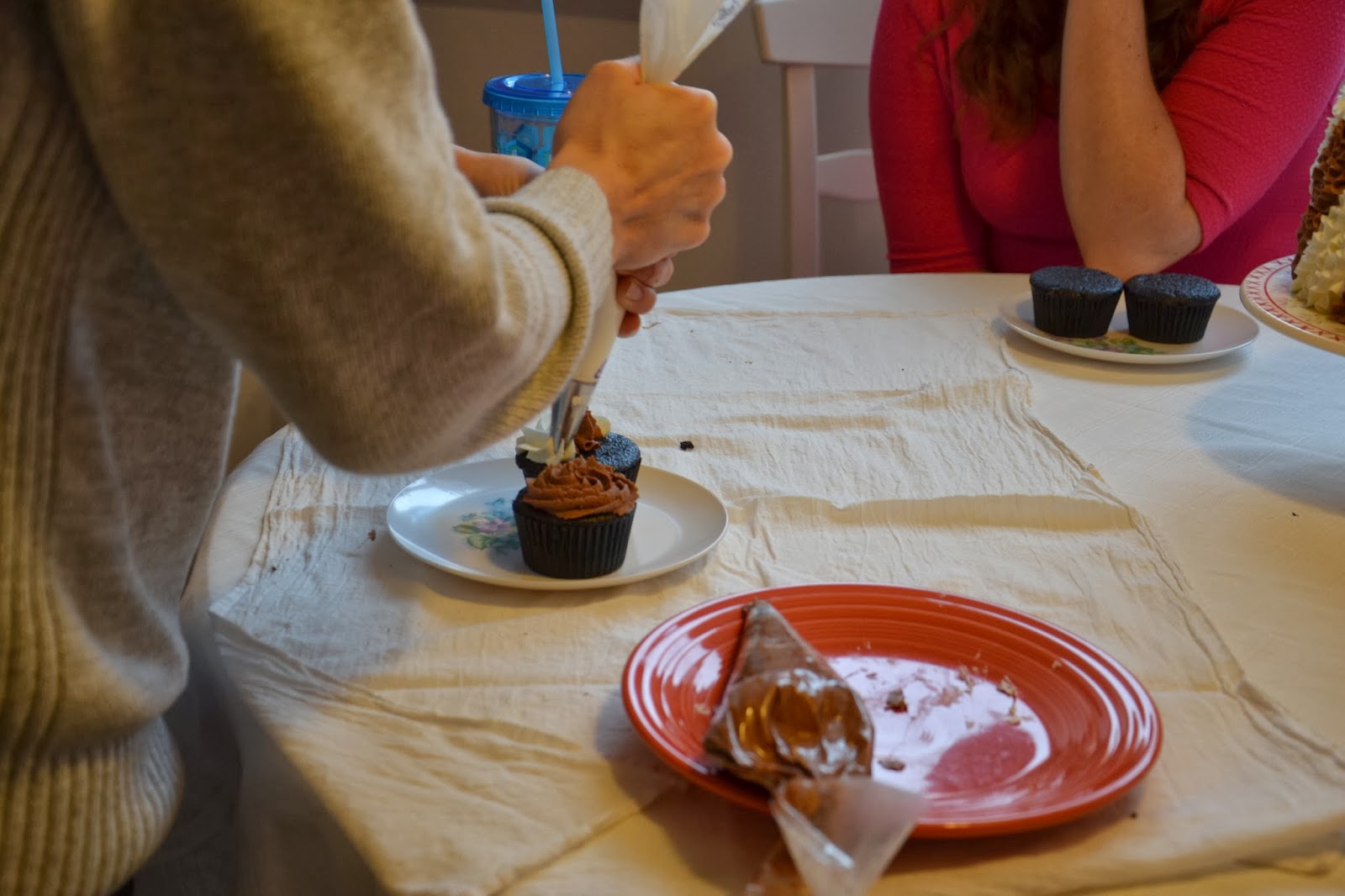 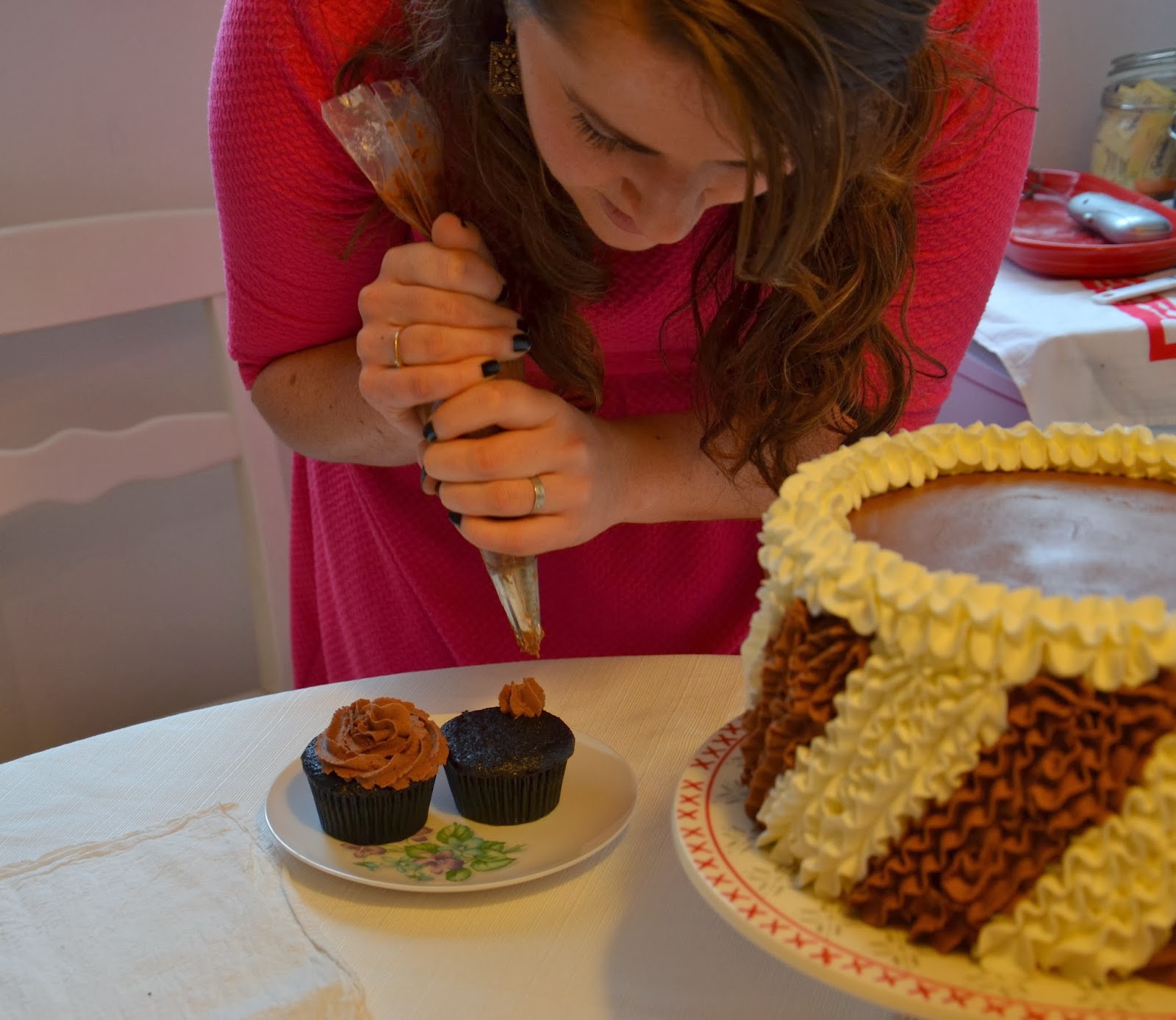 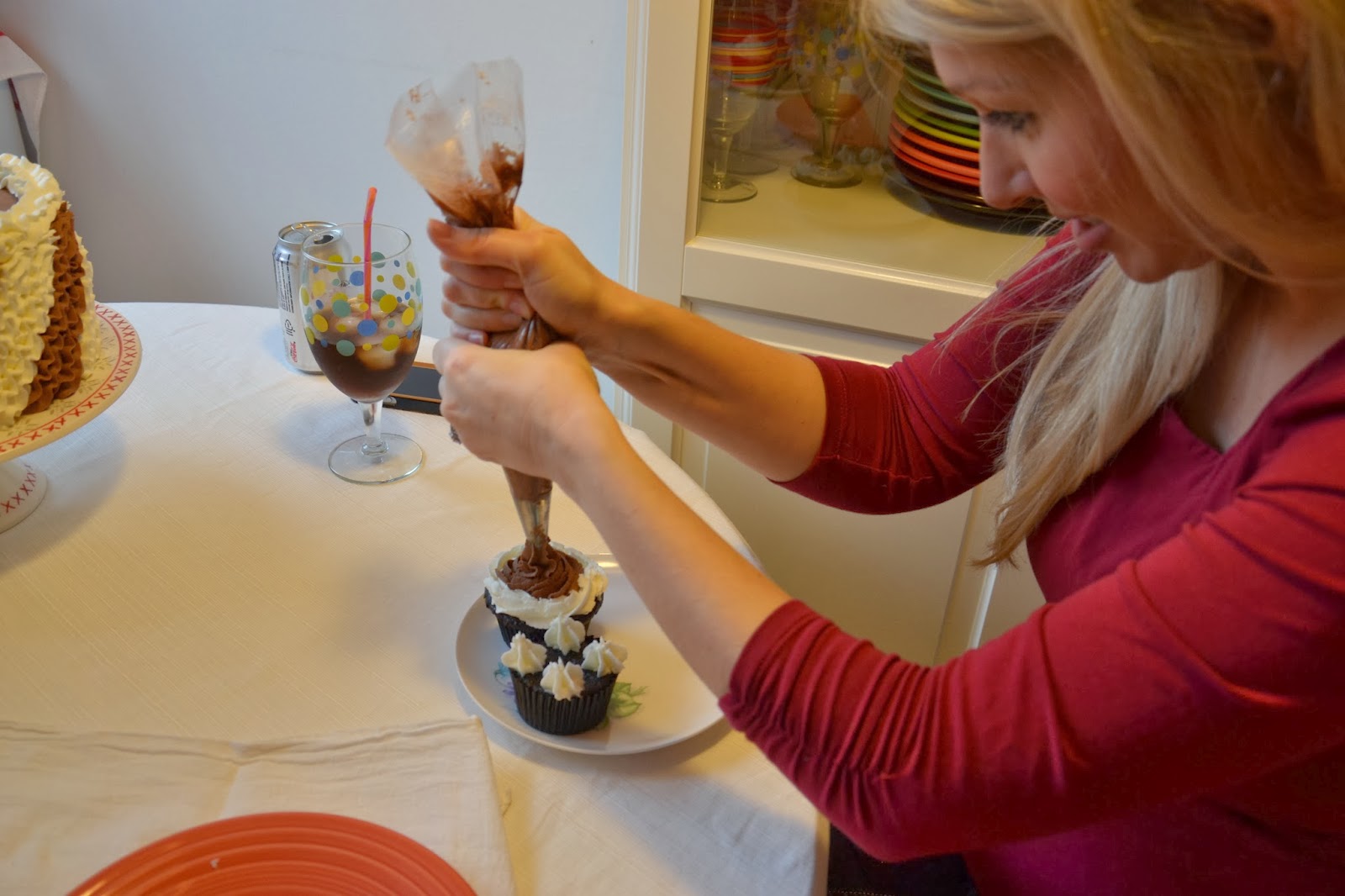 I am grateful my life partner supports my creative process.

I am grateful that I have friends who feel free enough to say, “we want to come to your house” and then do.

None of this is possible without sobriety. 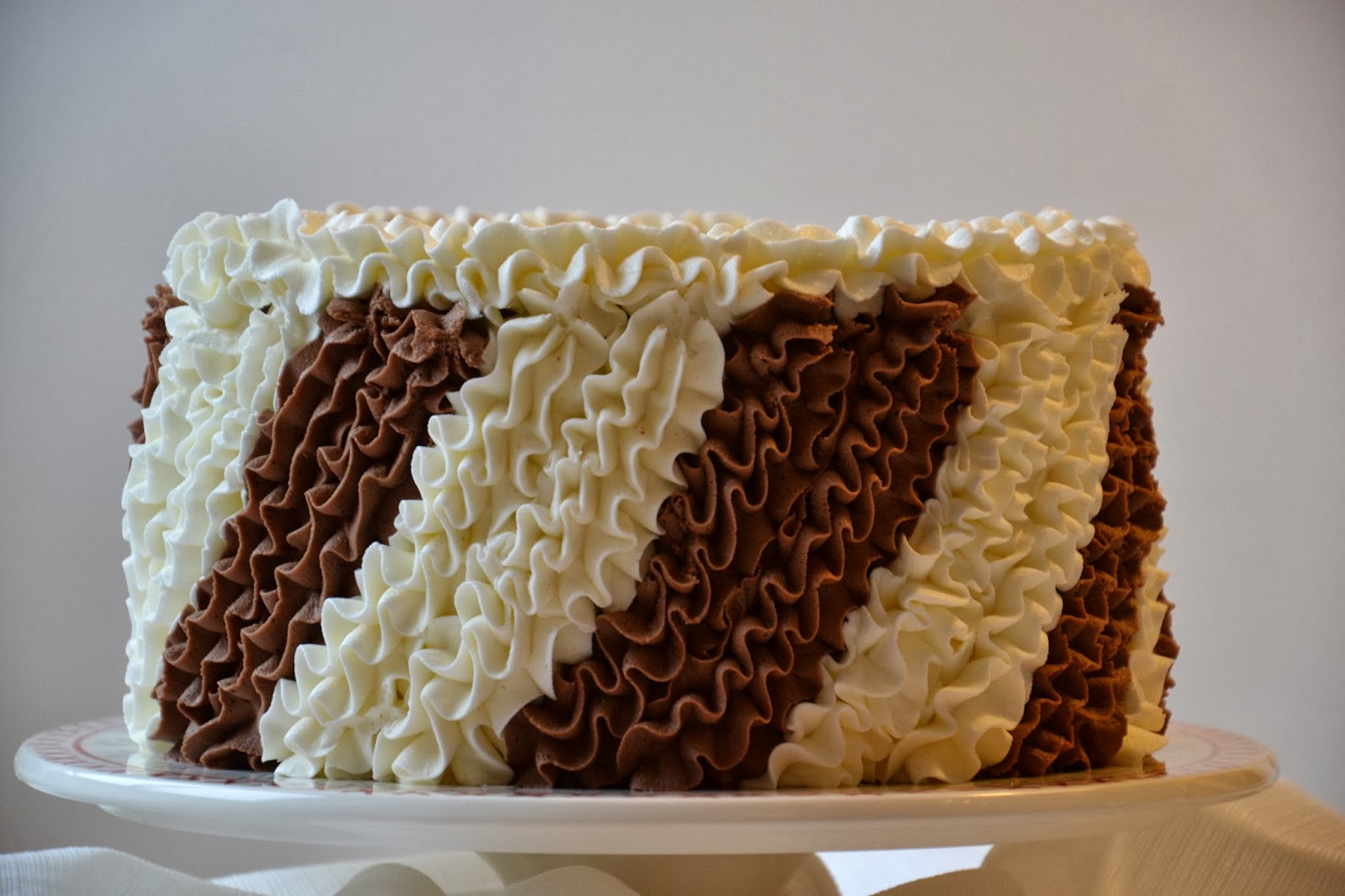 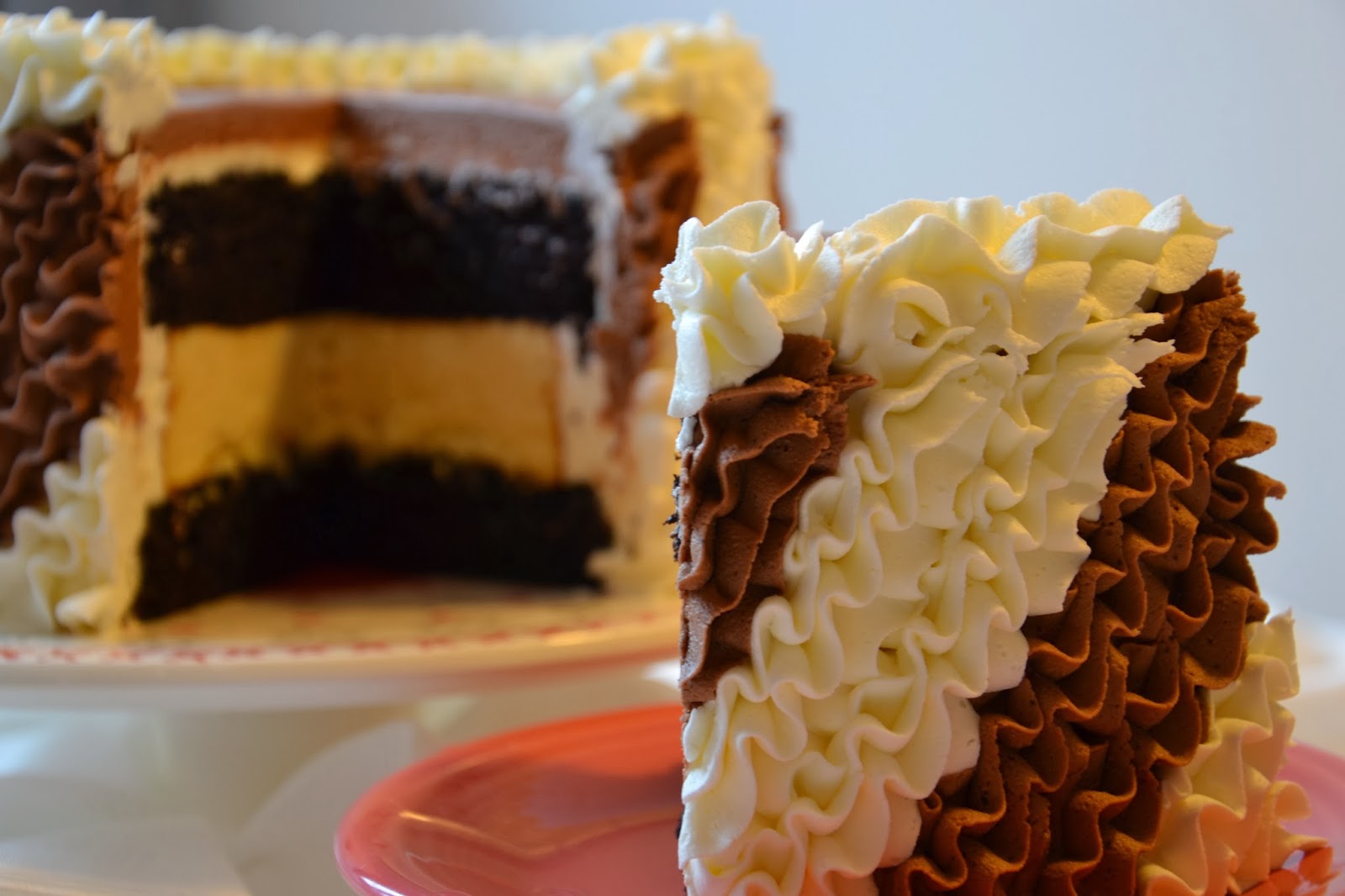