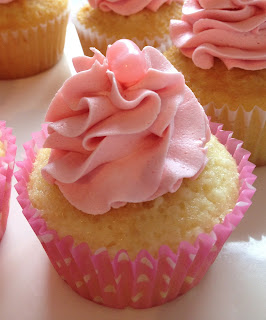 Yesterday while writing a new blog post, I was busy…..baking cupcakes.  This is evidence that I’m growing as a baker.  I can do two things at the same time as long as one thing involves the kitchen timer.  Now that I think about it, I like tending to another task against the back drop of wafting cupcakery goodness.  I like knowing that.

Yesterday’s cupcakes were inspired by a wonderfully creative Starbuck’s barista.  She is a confident woman unafraid of American social convention – which is good, because we’re here in Germany. A couple months ago her hair was a lovely combination of light lime green with some turquoise overtones.  Talk about a POW moment.  Huzzah!  She inspired the Vanilla cupcake with Lemon-Lime frosting.  The frosting was salted butter, confectioner’s sugar, clear vanilla, lime zest, and lemon juice.  So.much.flavor. I loved sharing them with her.
Anyway, a few weeks ago, her new hair color was nothing short of Bubblegum Pink.  I HAD TO make bubblegum cupcakes!  Back to the test kitchen I went.  With 12 seasons of Chopped under my belt (not all seasons are available on iTunes), I began to reduce the Bubblicious down to its liquid form. I love watching chefs reduce hard candies and unusual ingredients down to their liquid form.  But wait.  Melted 10 pieces of chewing gum becomes …. a large piece of melted chewing gum. Epic fail.  This that included the complete loss of a saucepan (can’t clean a gum-encrusted pan) and the annihilation of a dish scrub brush (any guesses to what happens to the nylon bristles when trying to clean the gum-encrusted pan?).  I checked in with my FB community and learned that most commercially available liquid flavoring tended to produce a medicine-like taste.  Instead, I went in the direction of the powdered Duncan Hines frosting additive.  Oh yeah.  I can’t buy that at the store – I need order to it online and wait by the post box.  Again.  For more baking stuff.  I’m not sure what I’m learning with this idea-wait-patience cycle.  It’s interesting, though.
So yesterday I baked.  The first batch (I only intended to bake one batch, sigh) was the white cake recipe (hot tip: the difference between vanilla white cake and vanilla yellow cake is the egg yolk; I use six egg whites in the white cake and three eggs in the yellow recipe).  I used white cupcake paper liners for the white cake – after the first dozen were in the oven, I added a little bit of red food coloring to the batter to turn it pink.  Yes, the batter was pink, but after baking it looked peachy.  Not what I wanted.  I wasn’t happy with how the white cake in the white liner looked, I wasn’t happy with the not-pink in the white liner either.  I don’t like unhappy in my cupcaking.  Am I attached to happiness? 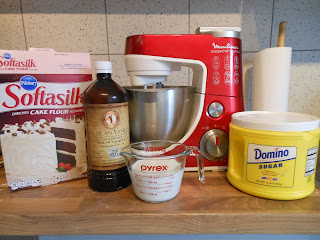 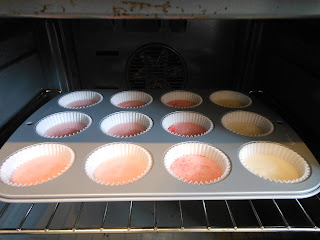 Nine cupcakes on the right are tinted pink.  Which didn’t bake pink.
OH.  Hang on.  What about pink cupcake liners?  Sooo simple.  Sometimes, I miss the really simple things.  I’ve often said, “I can complicate my socks in the morning.”  This was one of those times.
I whipped together a quick batch of yellow vanilla cake (I didn’t have 6 eggs in the fridge for the white cake recipe) and used two different styles of pink liners.  Bingo.  They looked like the vision I had in my head. Finished product.  The cupcakes on the stand are topped with a Jelly Belly – though it’s nearly impossible to see from this photo.
The frosting was my favorite buttercream…more about buttercream later.  So yummy.  Anyway, I added the pink, powdered flavoring and was hit with a bubblegummy cloud of a birthday party.  It looked right, tasted like bubblegum, and I’m not sure I liked it.  My husband was excited to taste it and agreed this was perfect for people “who like eating bubblegum.”  Well who’s that?!
I topped a few with Jelly Belly bubblegum jelly beans and we took them to the Starbucks.  My muse wasn’t on shift, but I’ll catch up with her.  Our friends who were working provided amazing feedback, declaring them, “Bang on.”  I decided these little beauties were in desperate need of an 8-year-old’s birthday party.
This morning, looking at the unfrosted vanilla cupcakes from the day before, I took a new approach to icing.  I decided to make some frosting from bits and pieces of leftovers from the fridge.  I had a small piece of cream cheese, a ¼ stick of butter, and the last dregs of some caramel sauce from a couple weeks ago that was about to crystallize – I didn’t even have legit milk or heavy whipping cream.  This was a stretch – end bits icing. 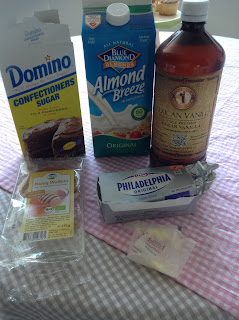 It tasted good enough and I topped the cupcakes with a quarter of a stroopwafel for texture and crunch. 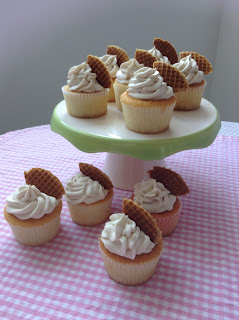 These were the cupcakes that remained when the Bubblegum frosting was exhausted.
I learn every time I put on my apron.  I challenge myself in the same way I challenged myself when working in rehab.  This wasn’t my plan and I’m grateful I have it.
WHITE CAKE RECIPE

Instructions
UPDATE: After we shared the Bubblegum cupcakes with some of our European friends, one 20-something raised in the Eastern Bloc stated this was “exactly what I was hoping for!” Check. Now I know at least two people who dig this flavor profile.