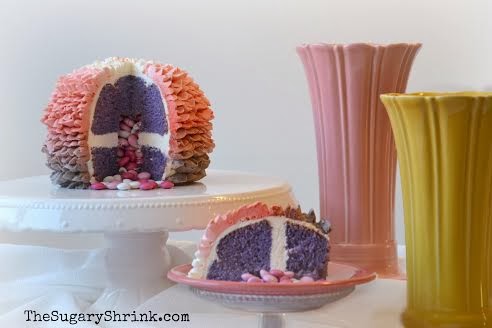 This cake continues to be a Test Kitchen cake.  My goal is to make something that looks like a circus ball …similar to a beach ball.  The first attempt, which was marzipan covered, resulted in something….less than ideal.  This is a second attempt using a different design technique.

I started by baking two small vanilla bundt cakes.  I tinted all the batter violet because this is a test cake and I wanted violet-colored cupcakes.  Each cake half needed to be trimmed before construction.  Hot tip: Placing the cake on an inverted bowl the same size as the bottom of the ball allowed me to frost the underside of the cake.

When ready, the steps I took included: 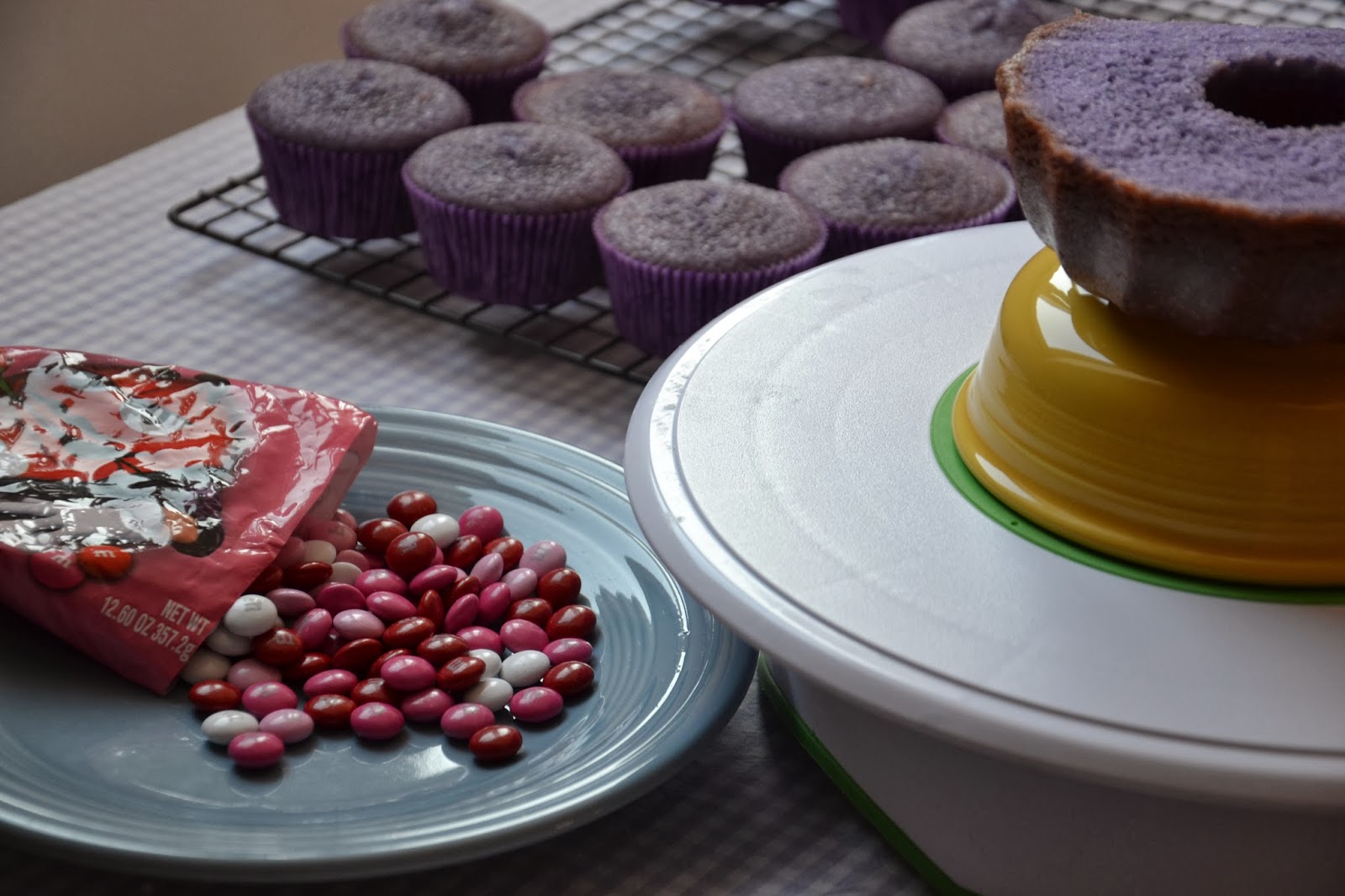 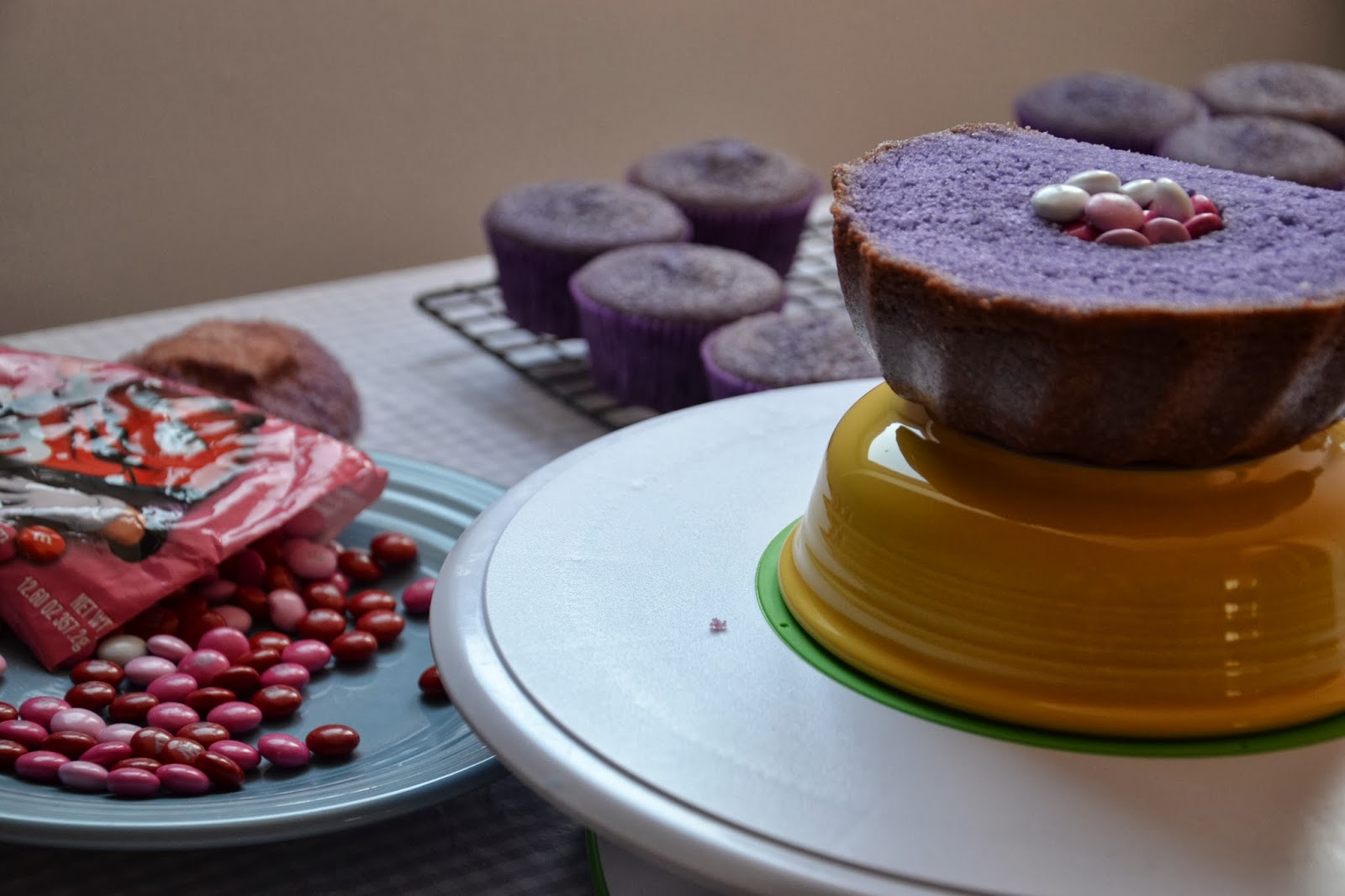 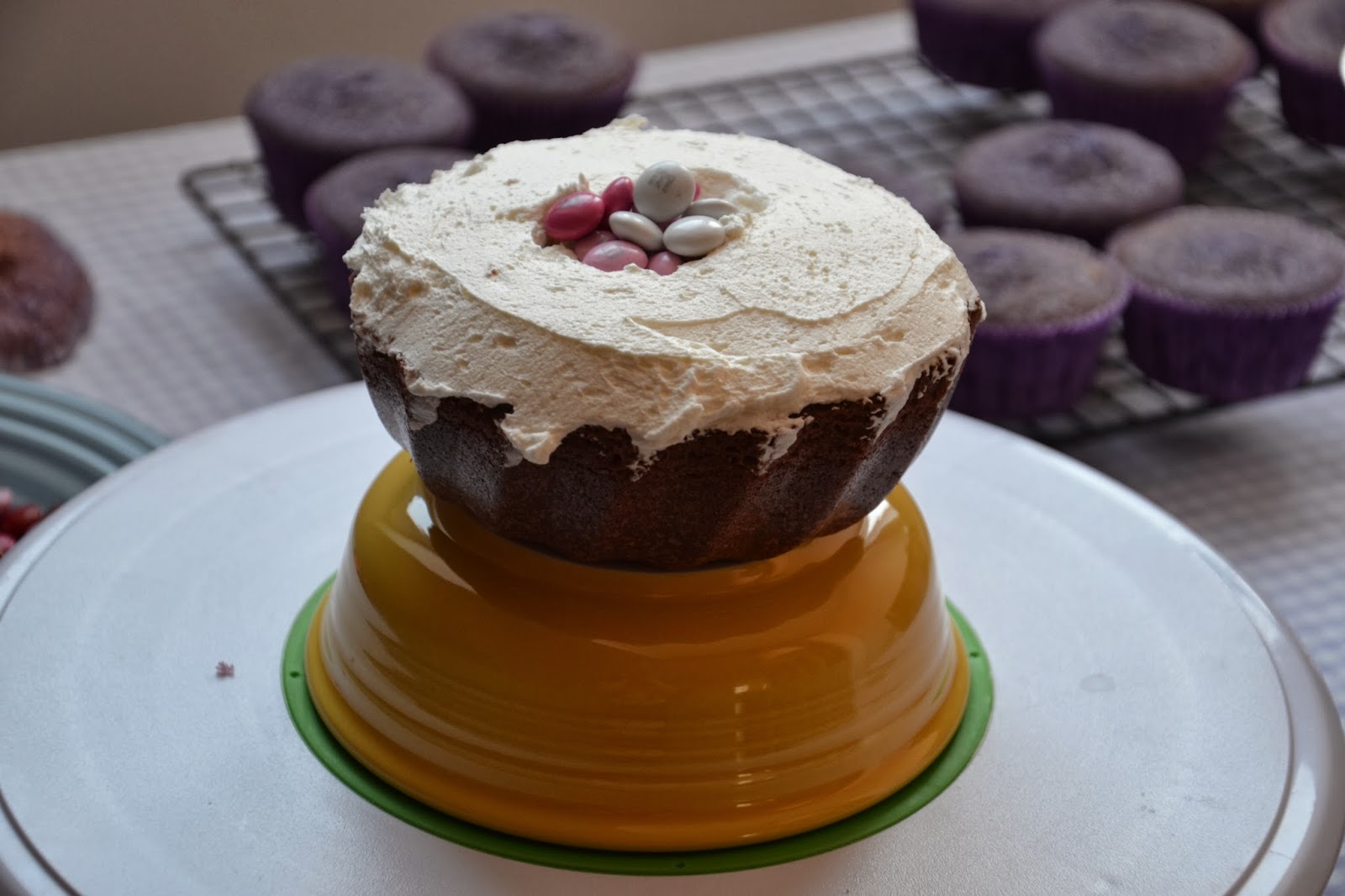 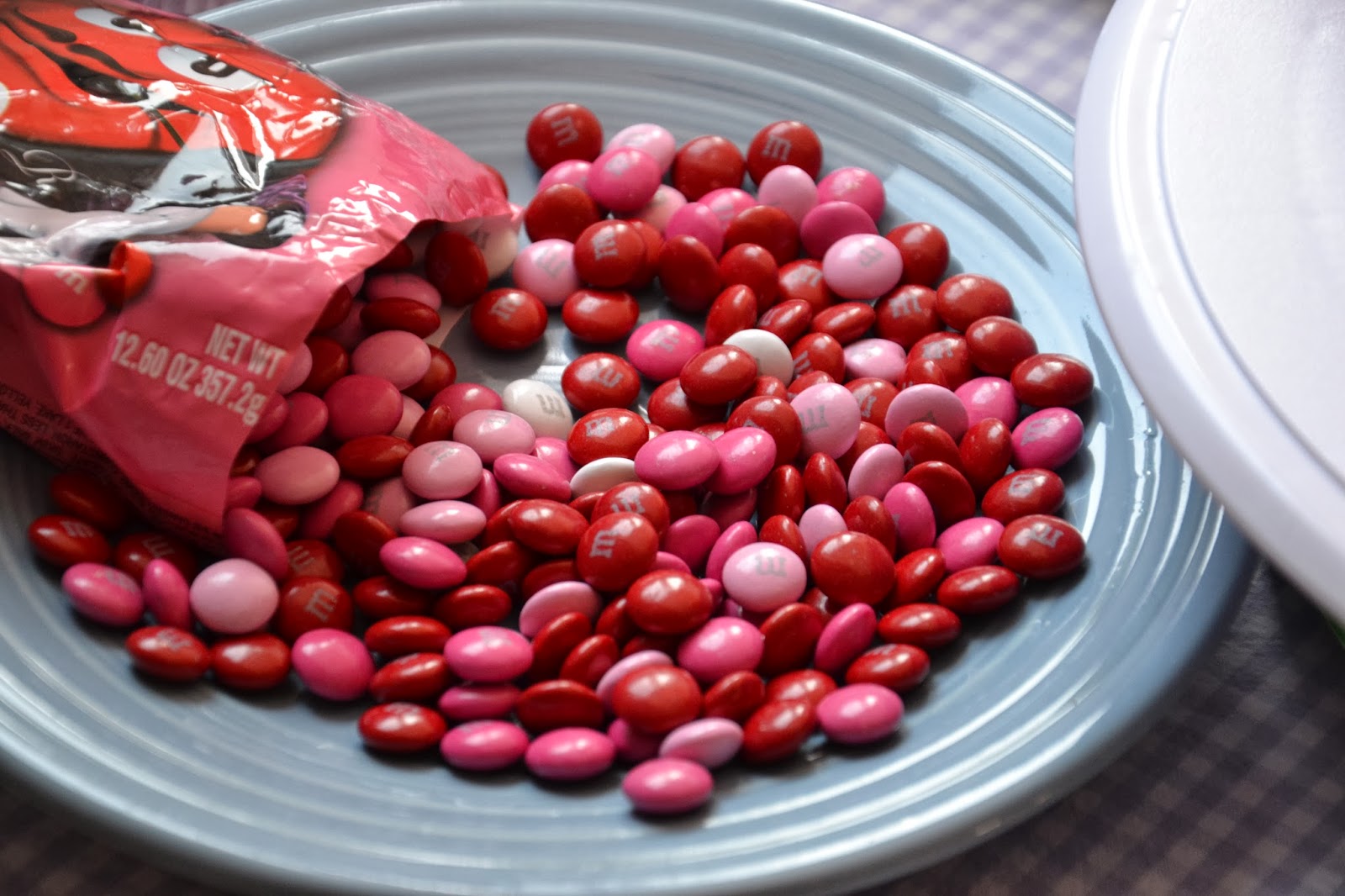 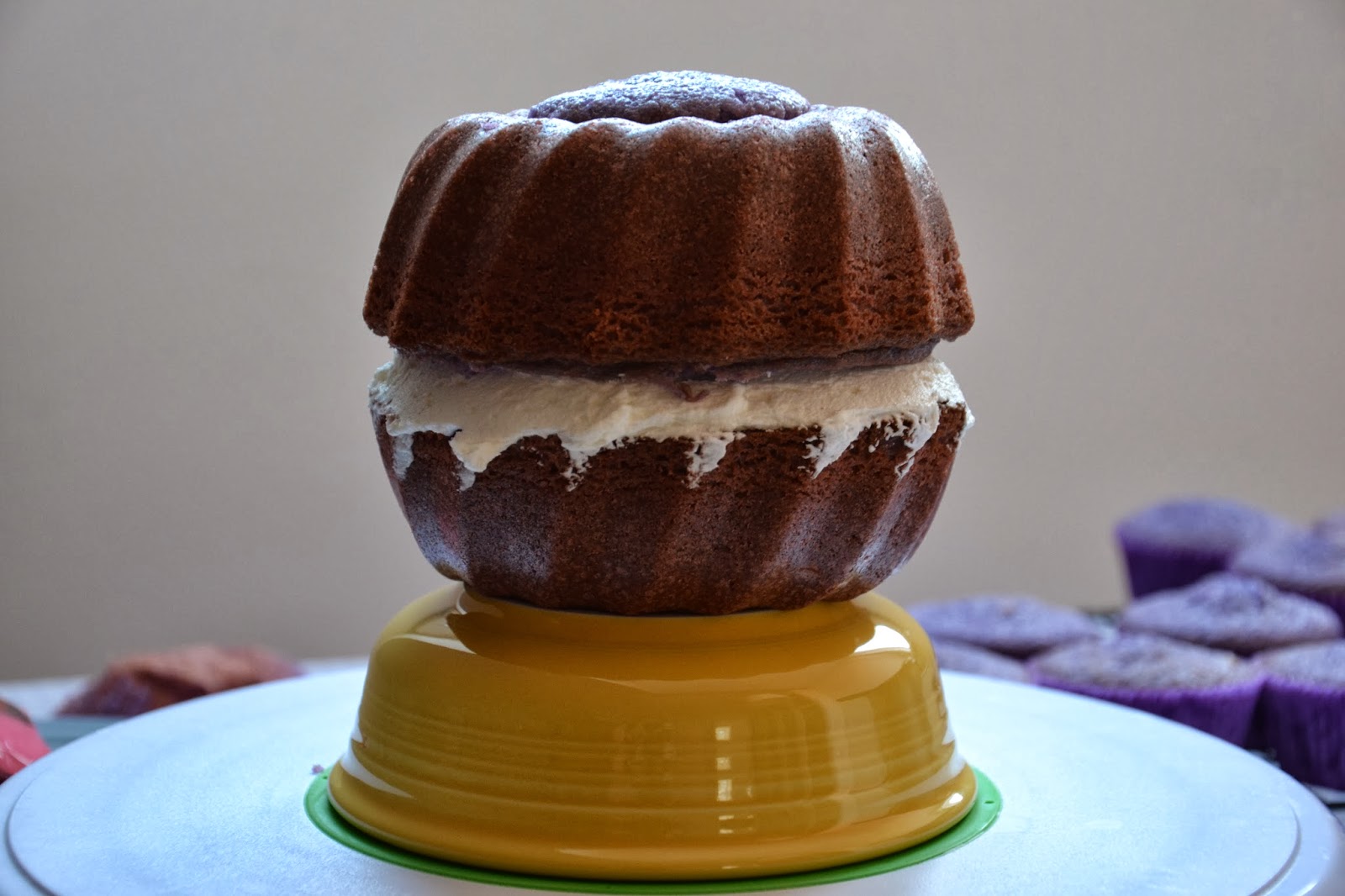 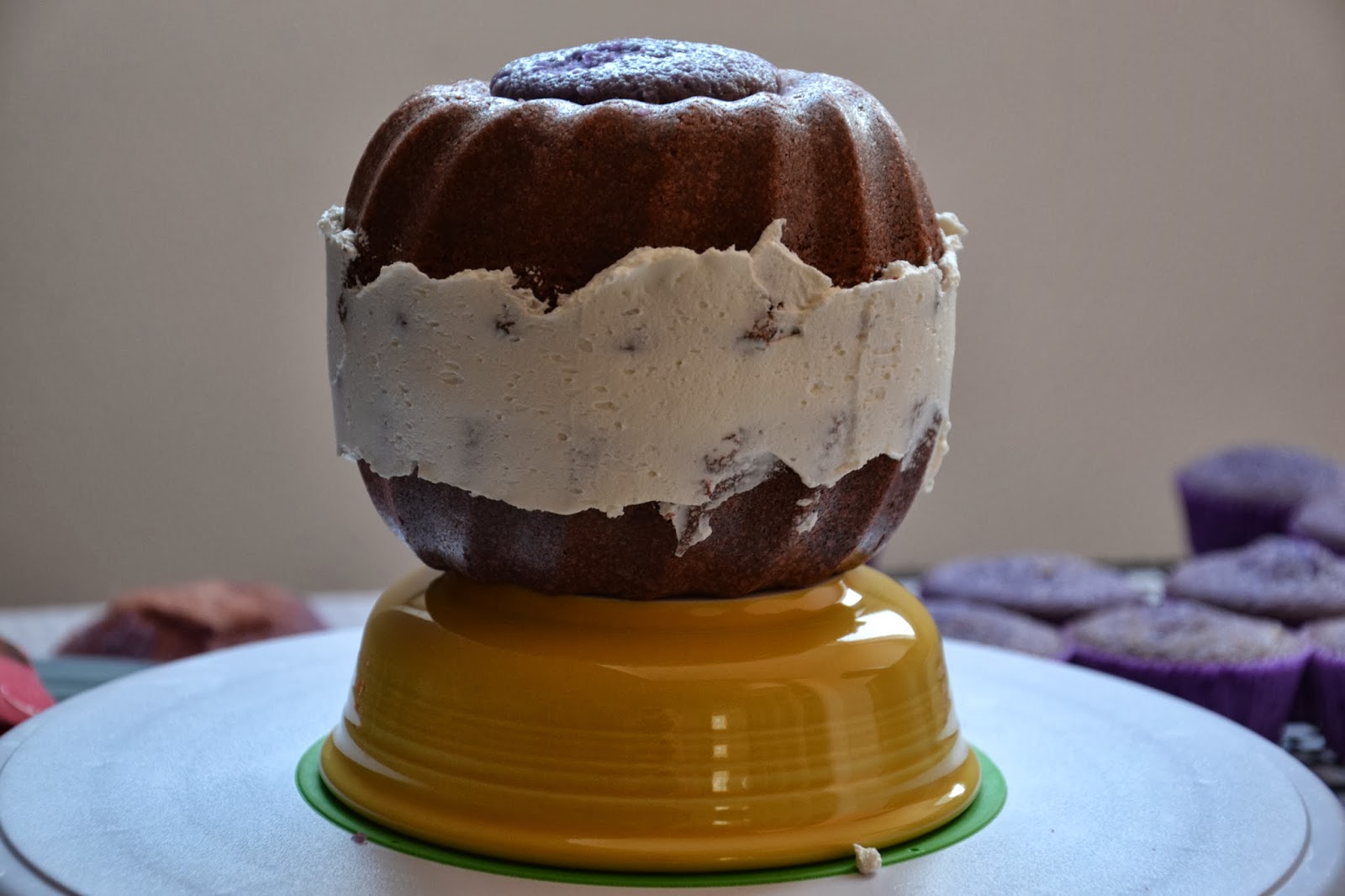 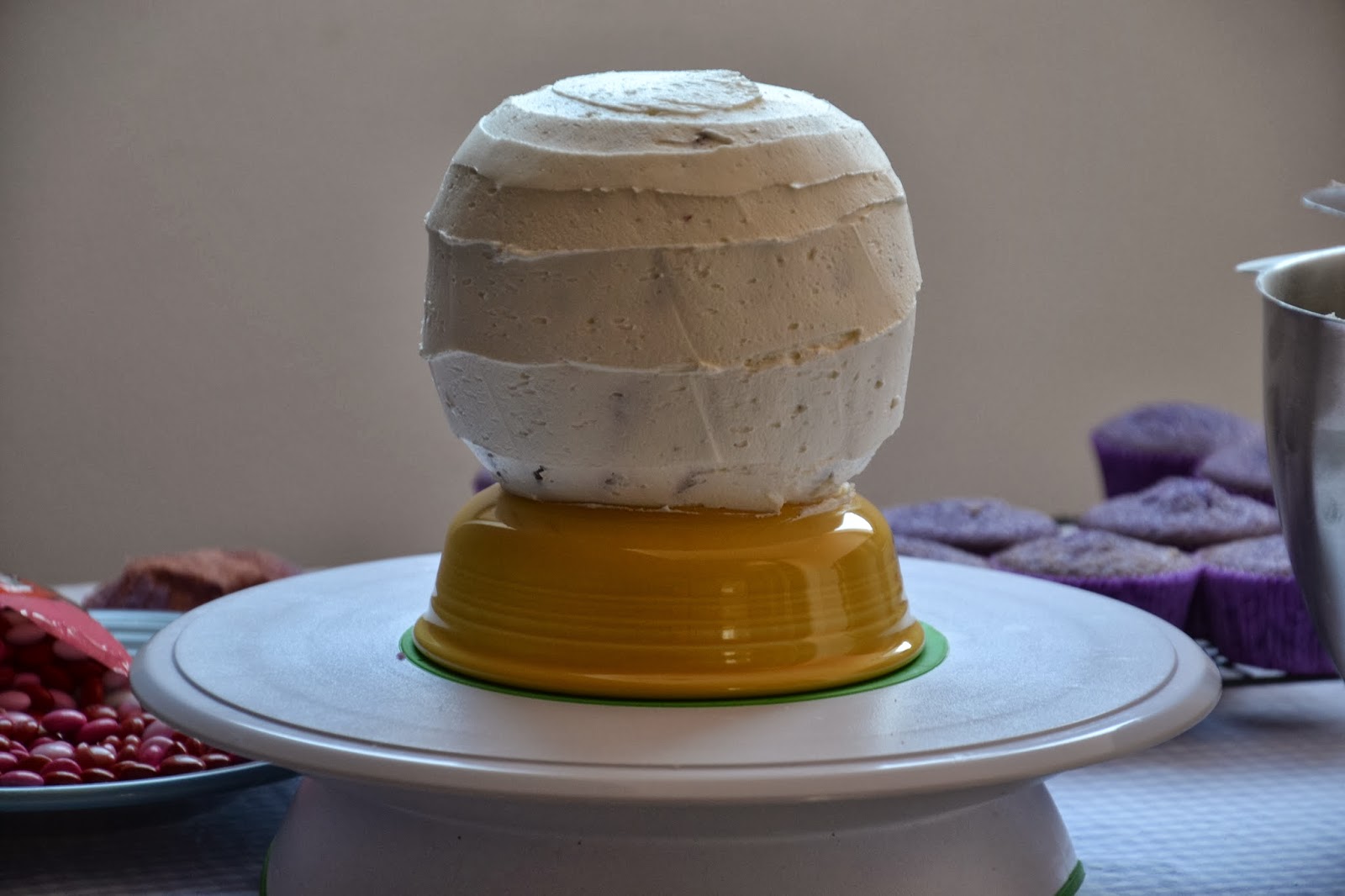 Knowing that I wanted to try the ruffled buttercream design (using a Wilton 103 tip), I needed to start in the center of the sphere at the top.  Umm… it took at least a dozen attempts before I got the very center piped correctly, including the turntable going at just the right speed.  I couldn’t figure out what I was doing wrong…and as soon as I changed my hand position/orientation to the cake, the ruffles worked!

I love tinting and piping buttercream in an ombré style; I think it looks pretty.  So, I started with white.  That little tuft on top of that ball looked just like a wee baby sporting a Mohawk.  I couldn’t stop giggling. 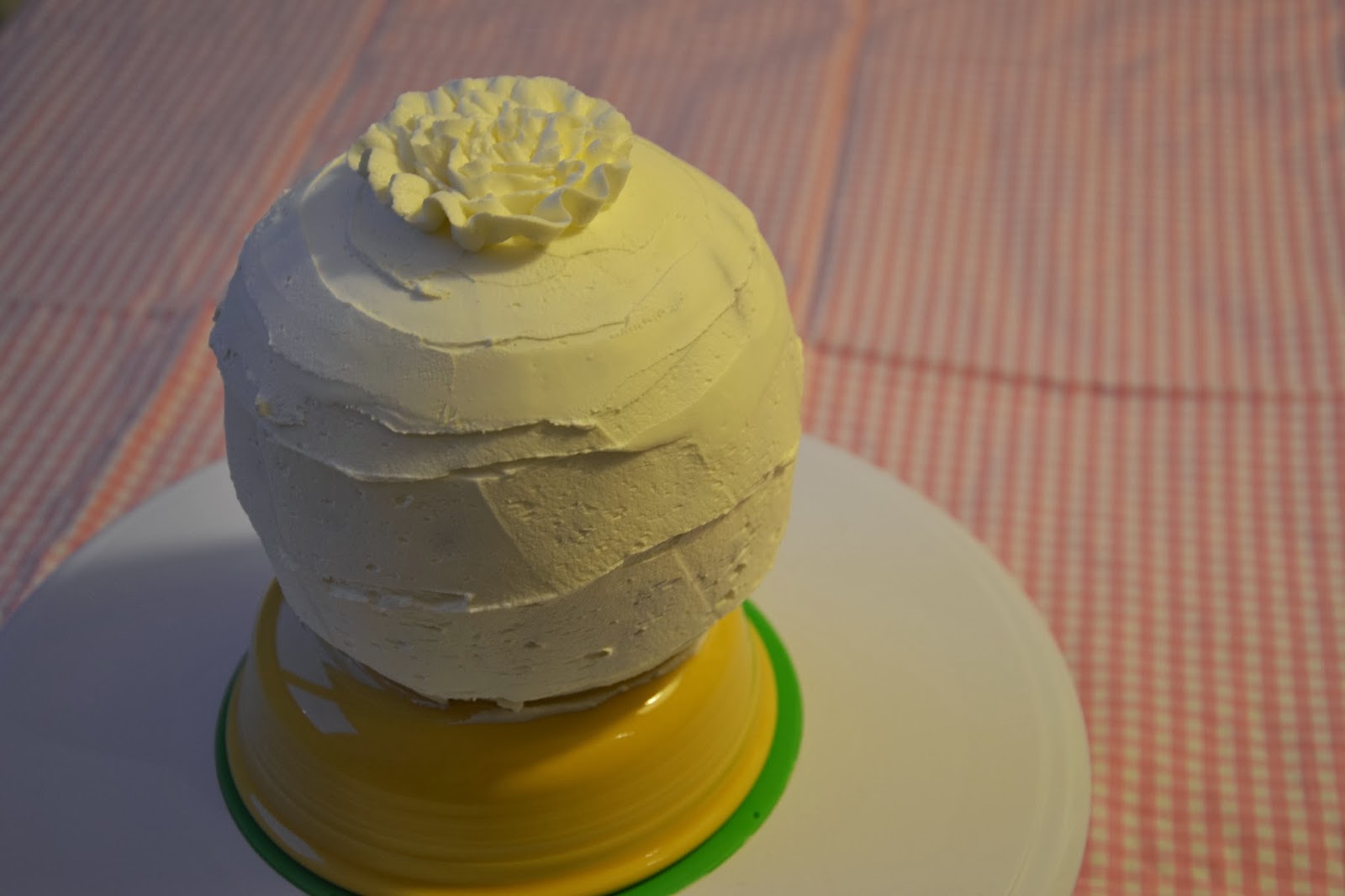 I was a bit sad I added too much red to the white; it was more pink than I wanted.  Oh well. 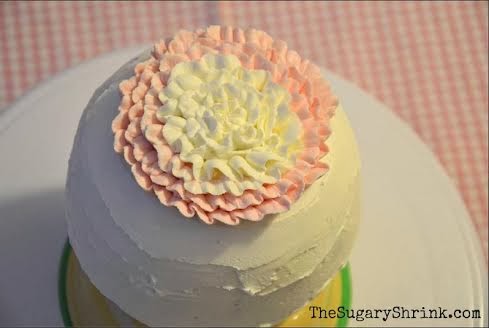 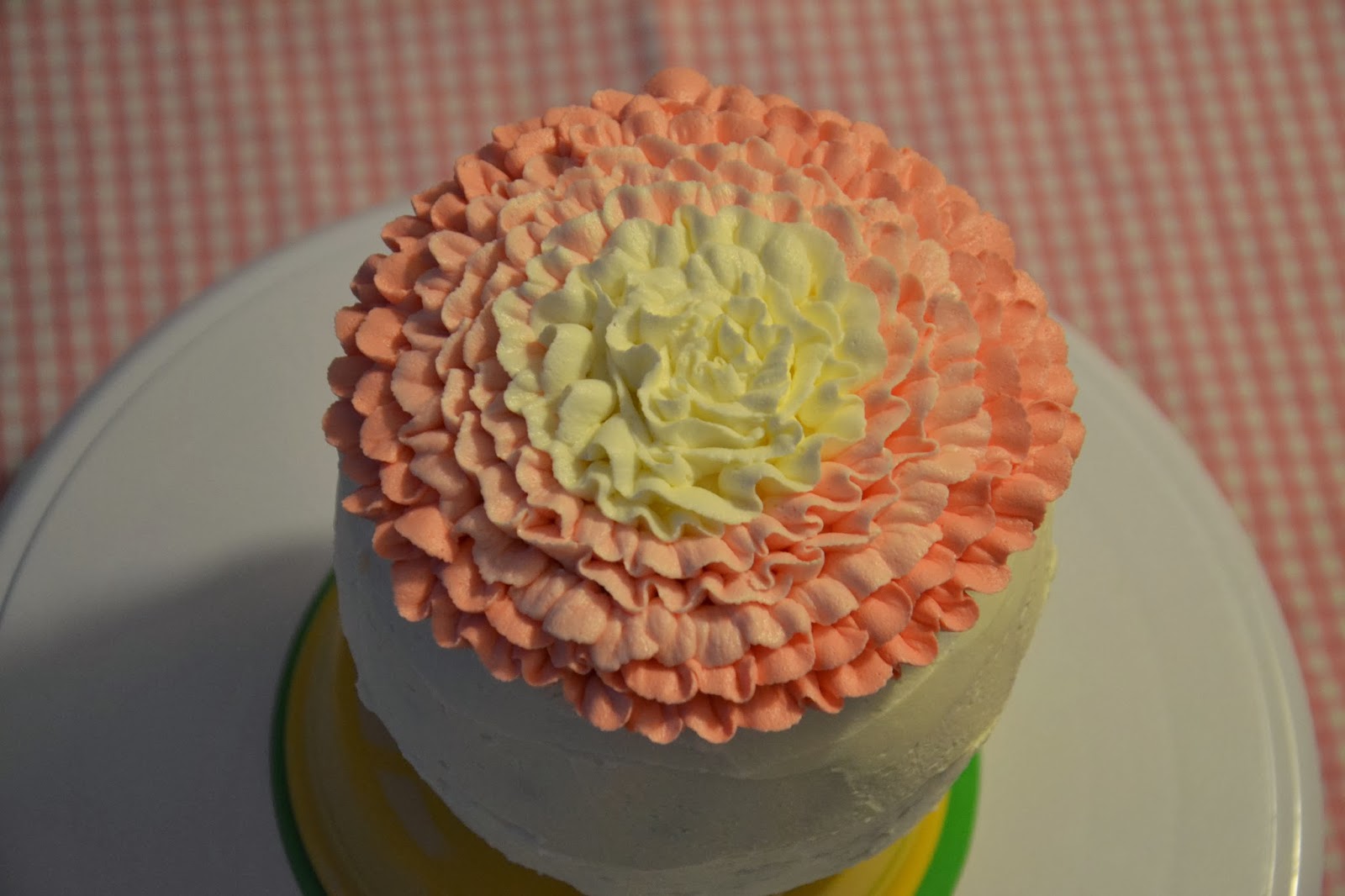 After I piped on two or three passes of one color, I’d stop to add more gel to the buttercream.  While this is relatively easy, it’s messy and time consuming. 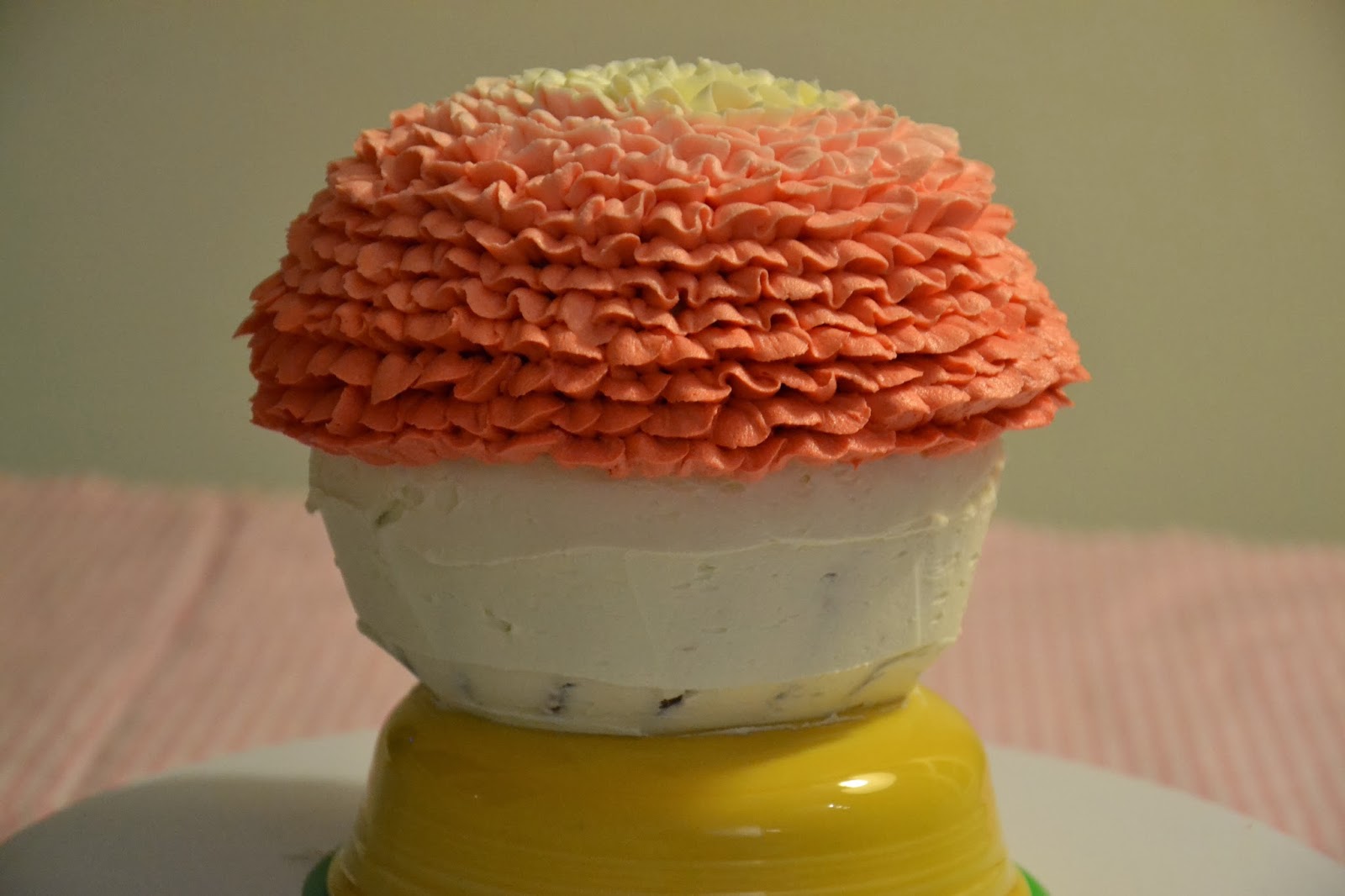 Reaching the midway line on this ball, I began adding just a touch of blue.  This combination lends itself to more of heather color – which is exactly what I wanted, something dark to deepen the shading. 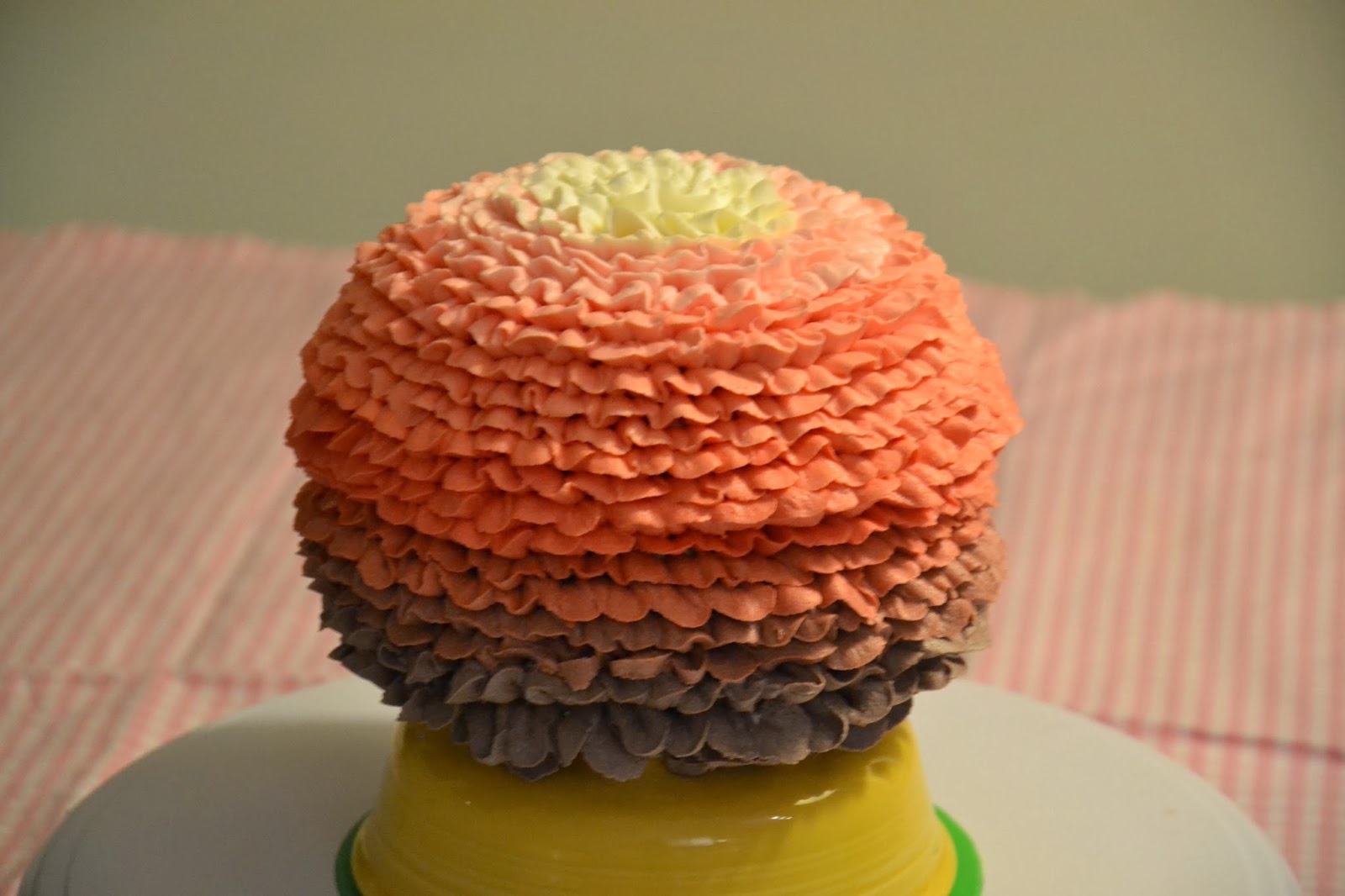 When I was finished decorating this cake, I stepped back and thought, “I think looks like a zinnia…except for the center.”  And then I found this one online.  It was not my intention to create a big round flower, but it’s what I made.

After taking the majority of the photos, I remembered I had a little bit of tinted, food dusting powder.  I bought it in Paris at Cake & Bake Accessories (ask for Paul).  Since this was a test cake, why not test more things?  I like the effect of the powder; next time I would add more…I think. 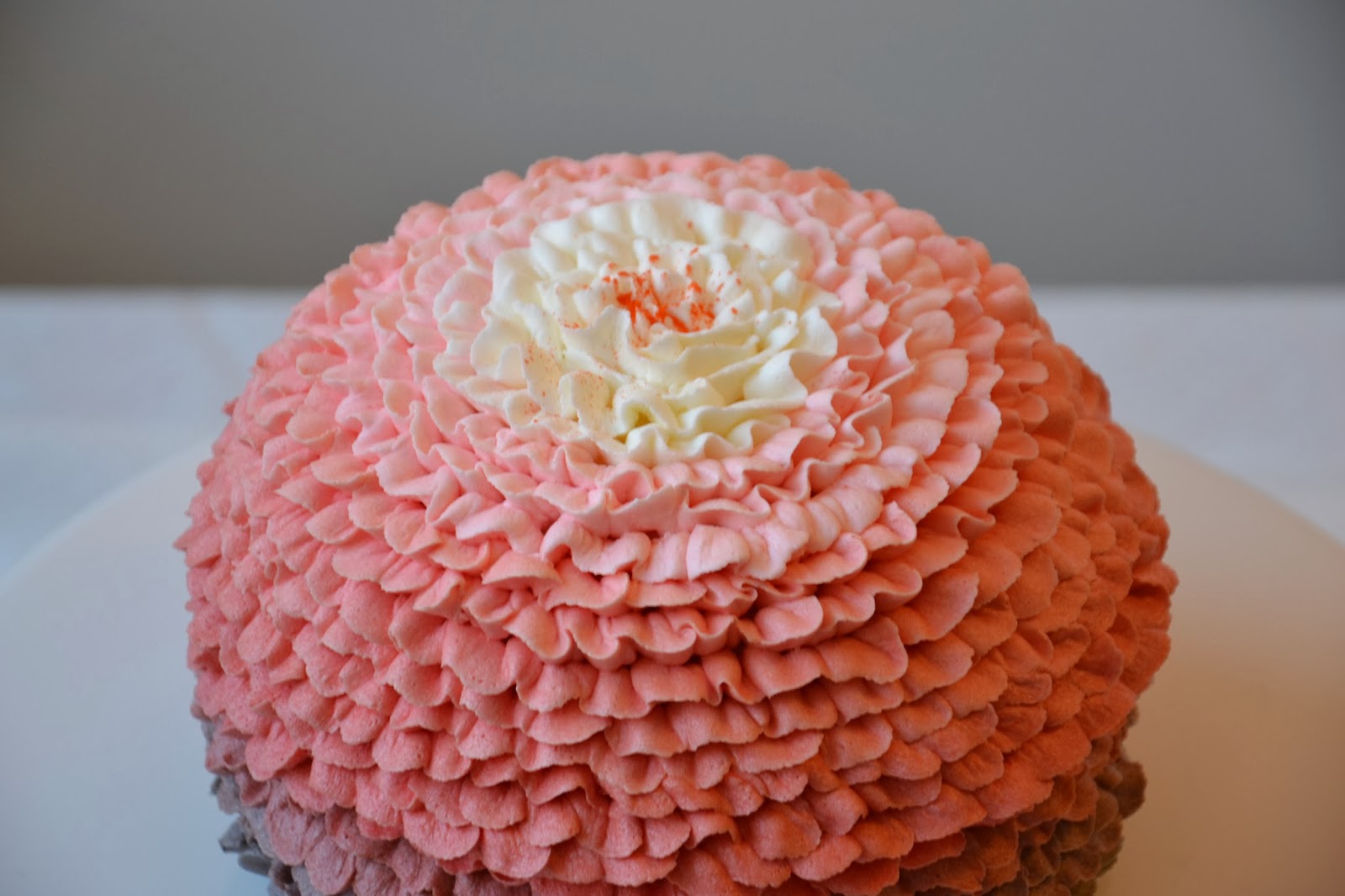 Though this cake is quite lovely, it’s still not what I want for a circus-themed cake I need to bake and decorate near the end of March.  I have another idea to try…using buttercream, with two different tips, a variety of colors, and a more vertical approach.

In the meantime, I learned the ruffles work!  And if anyone needs something like a zinnia or a carnation, it’s been figured out.

Moving the cake from it’s decorating stand to a cake stand took a moment to visualize.  Typically I use my amazing Wilton Cake Lifter, but it was definitely not the right tool for this job.  A spatula and a dinner fork were terrific.  I planned to place this cake ball on a medium-sized cake stand, but the look was out of balance.  “We’re gonna need a bigger boat.” 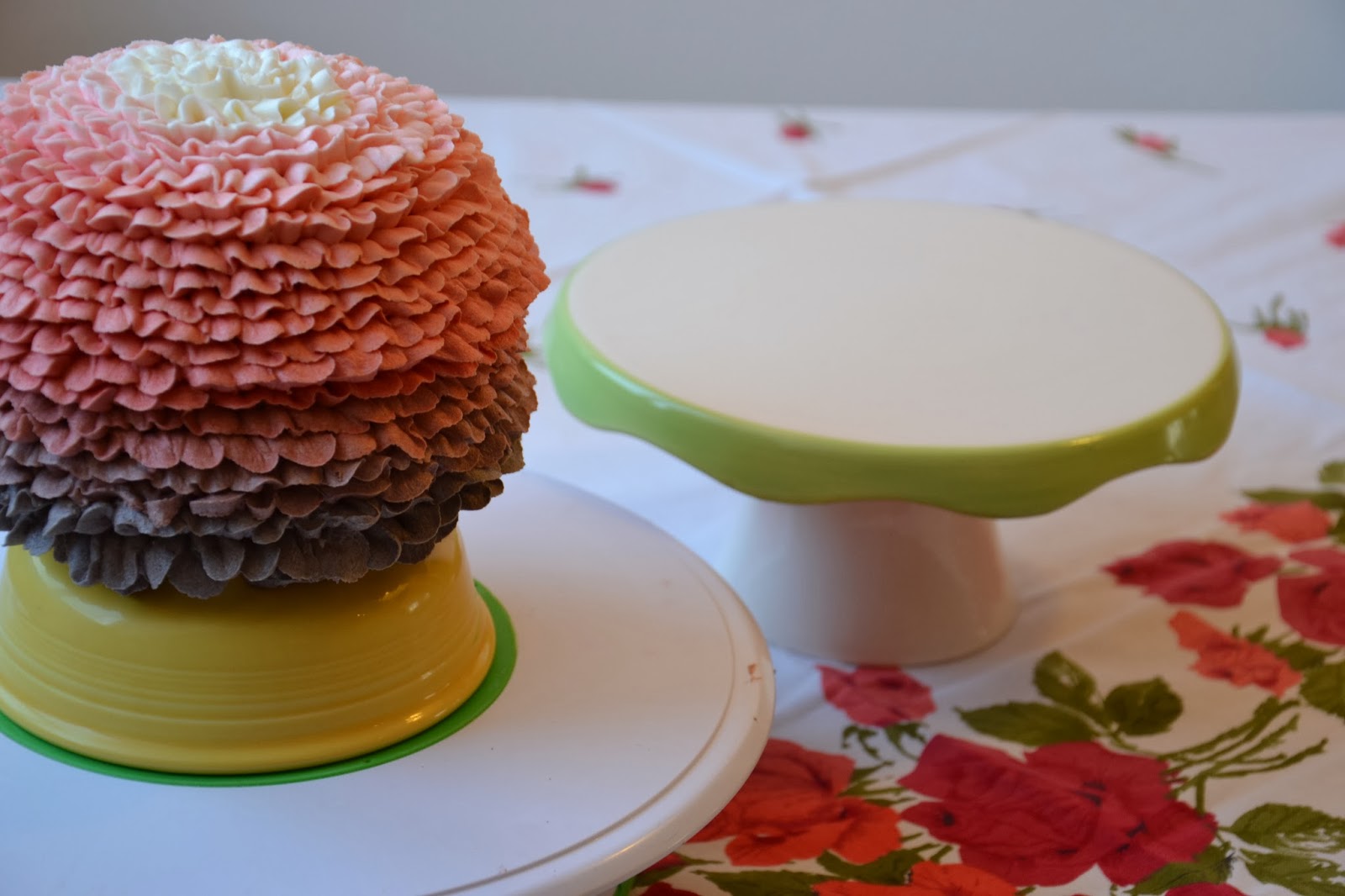 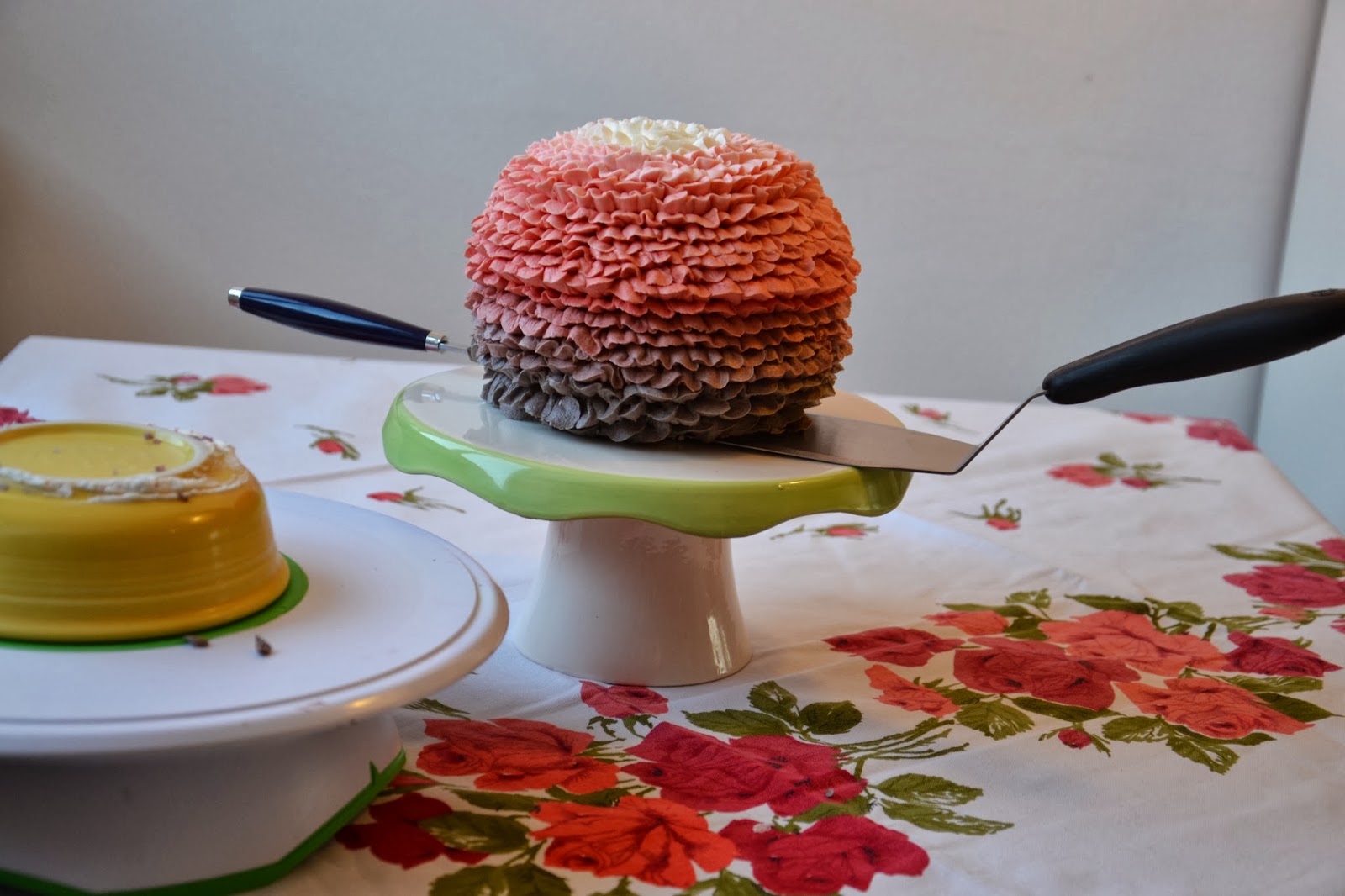 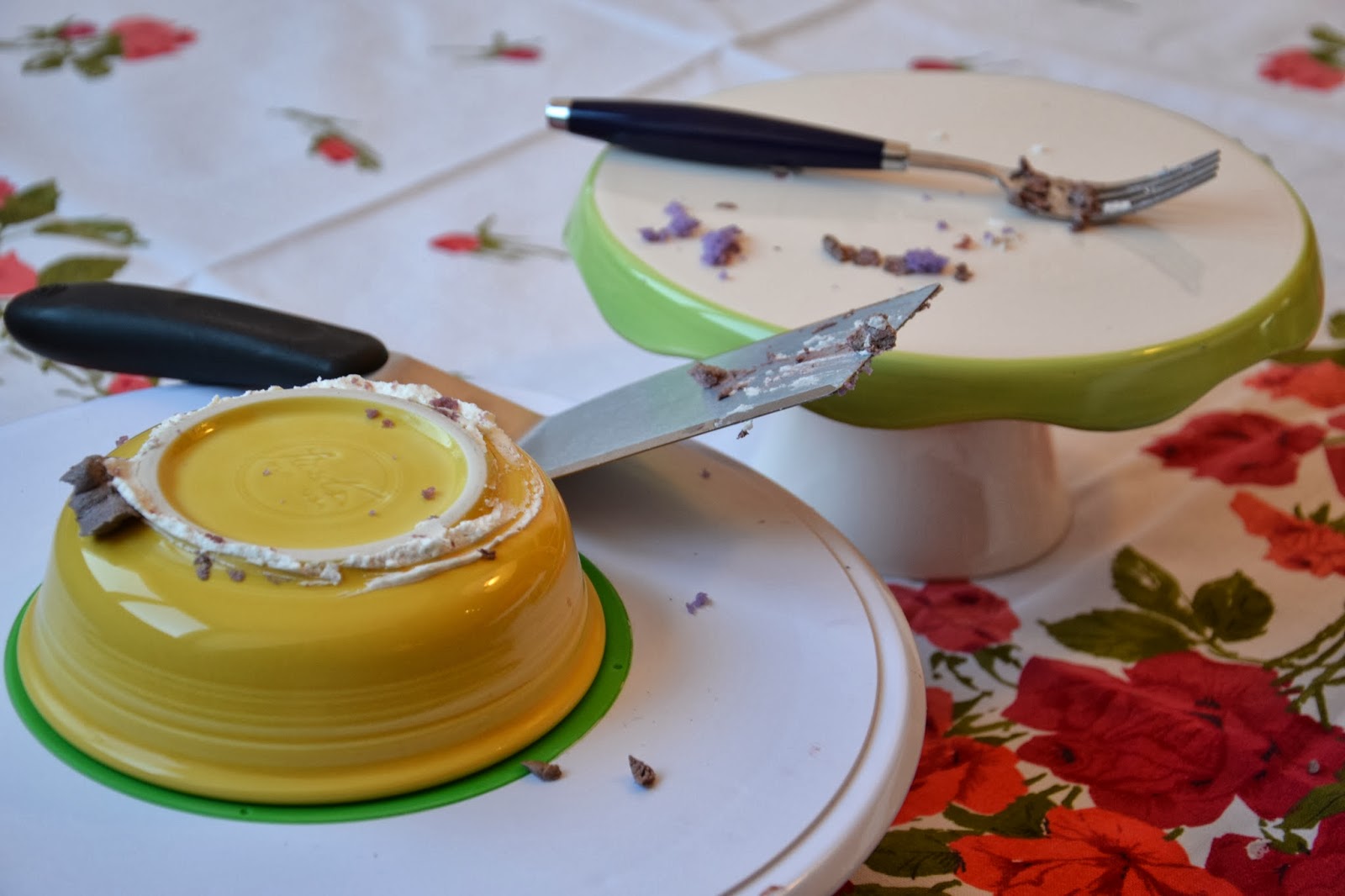 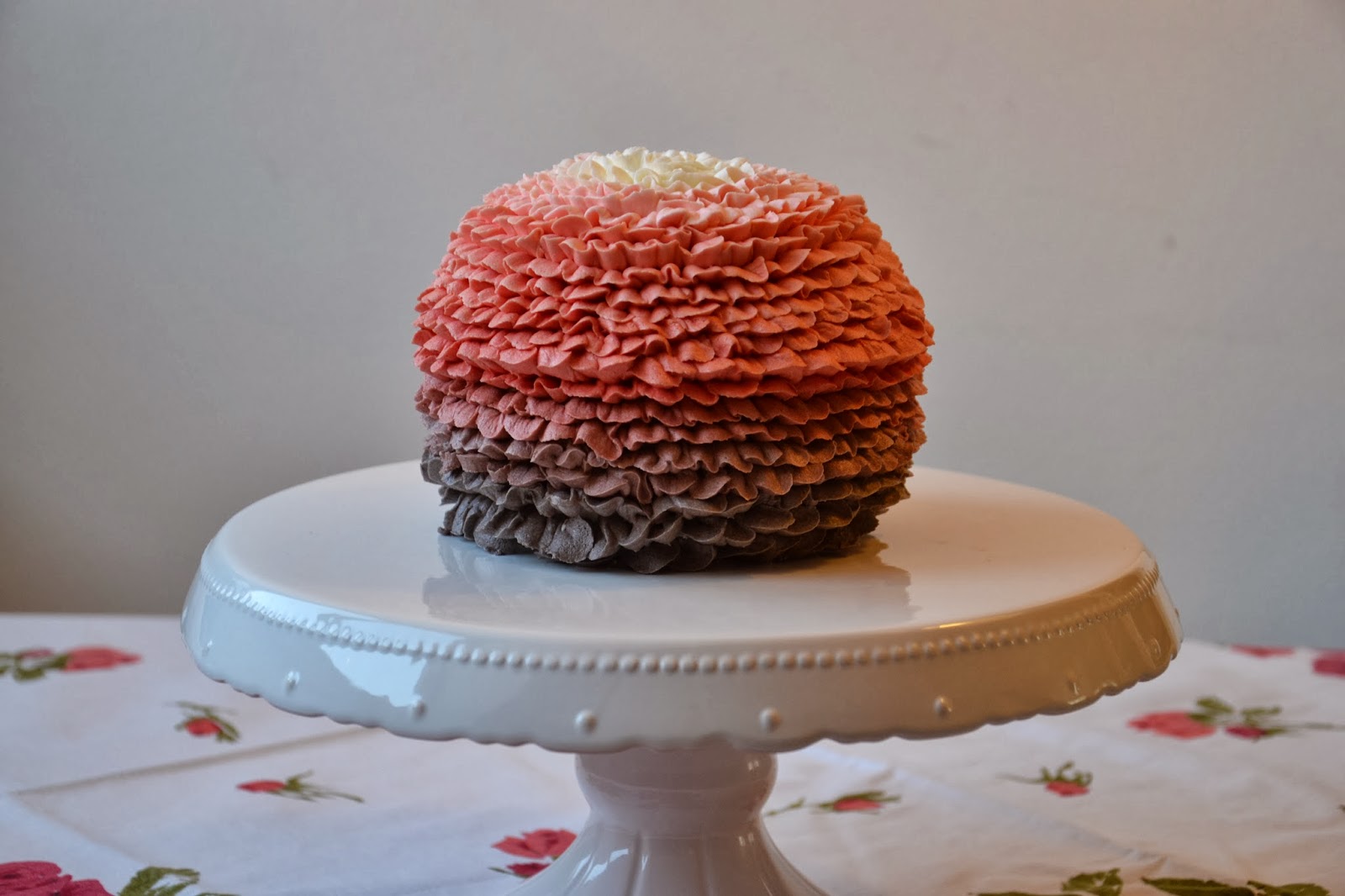 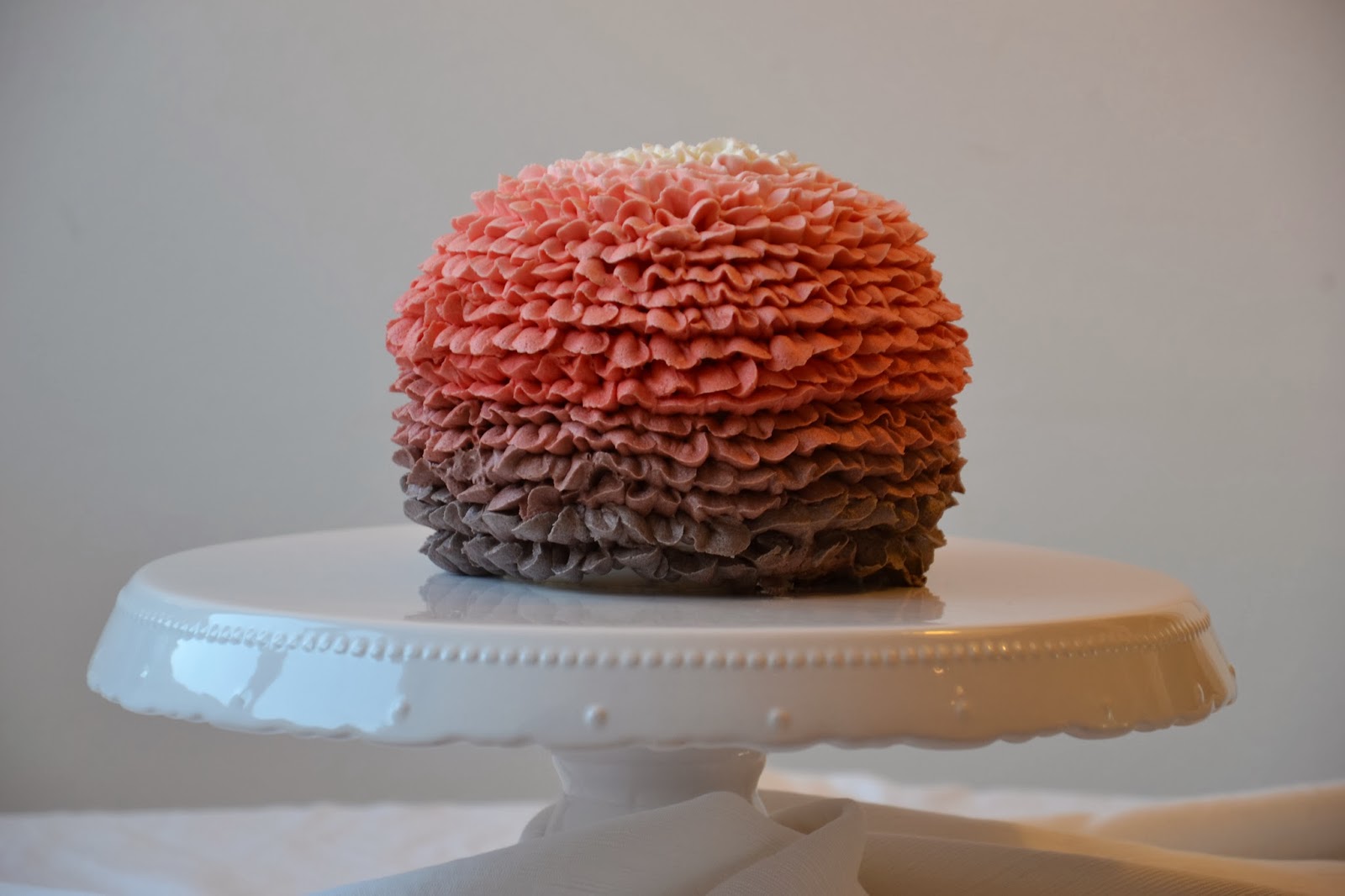 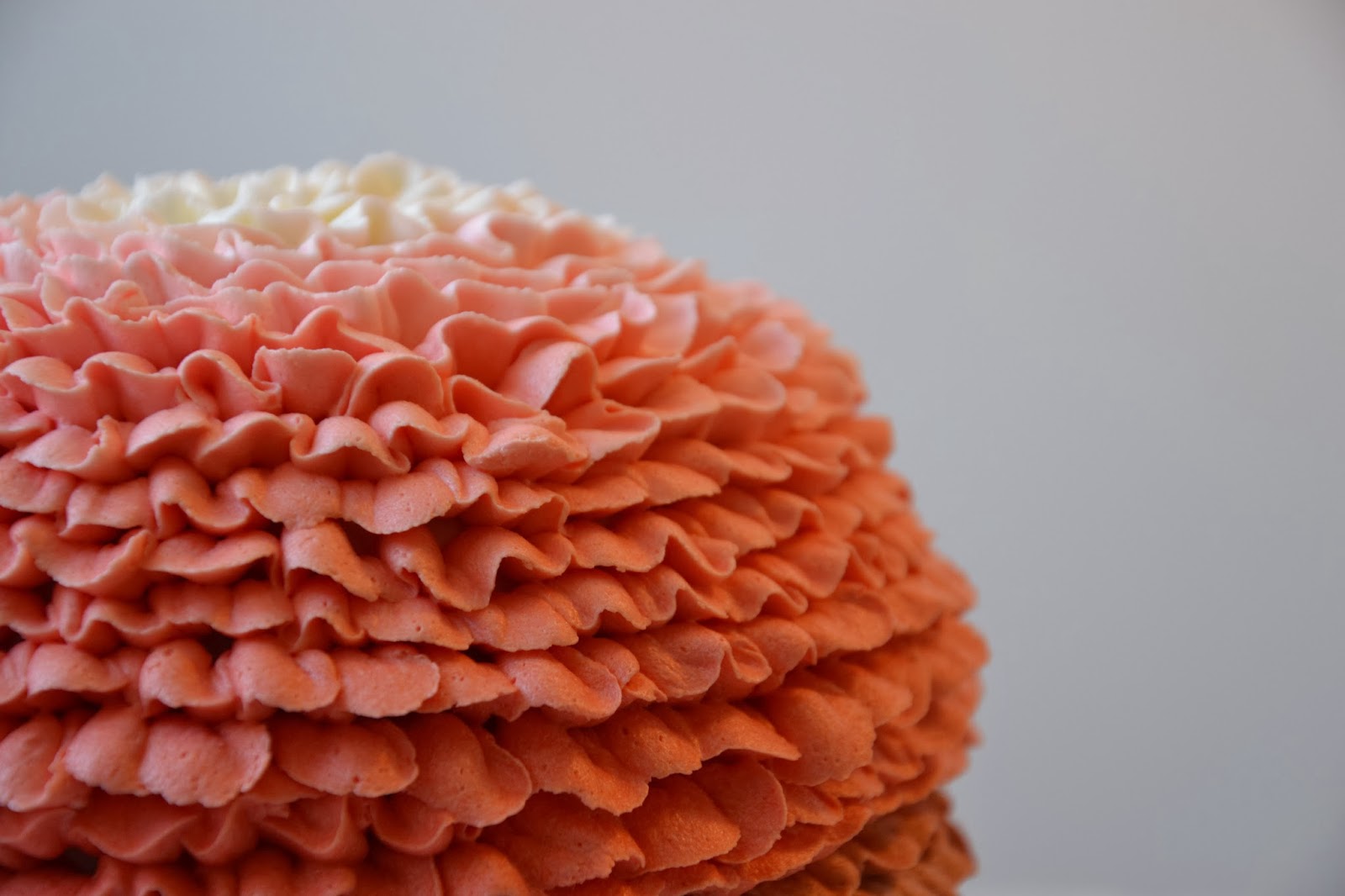 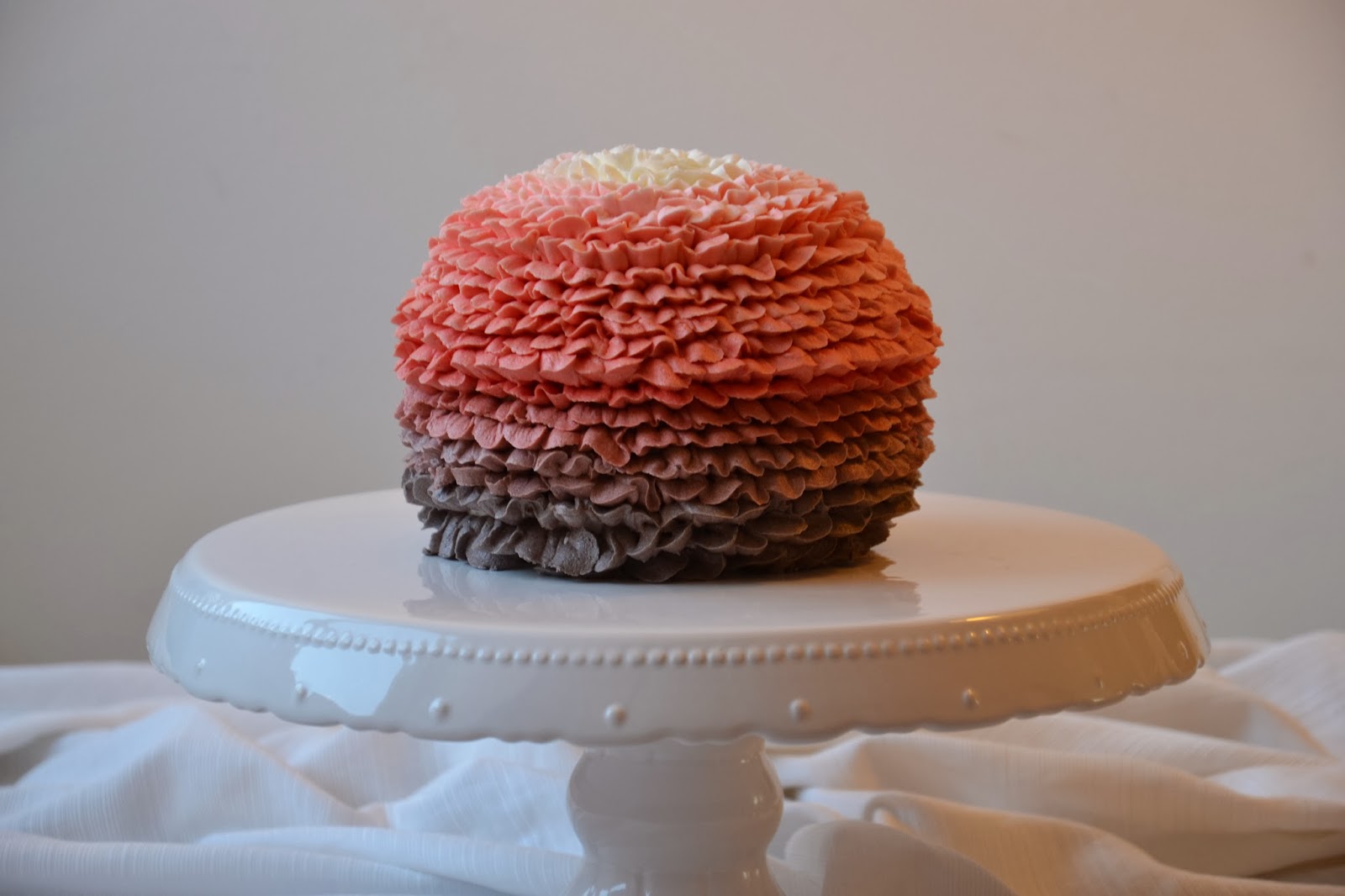 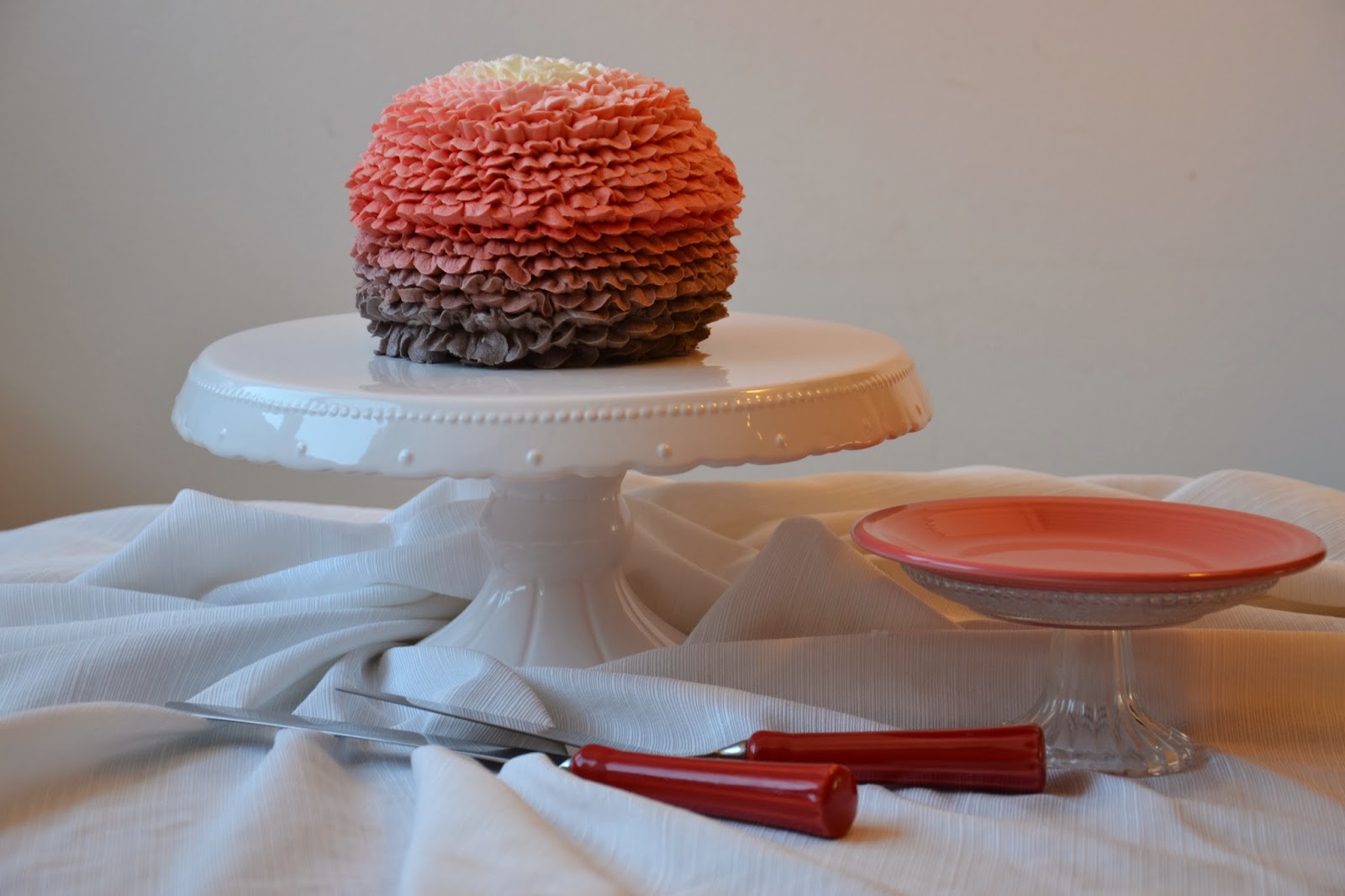 The piñata effect is still fun to me and I’m digging on it.  Of course, I’m thinking of all kinds of different ways I can fill this center…and I have a list already developed! 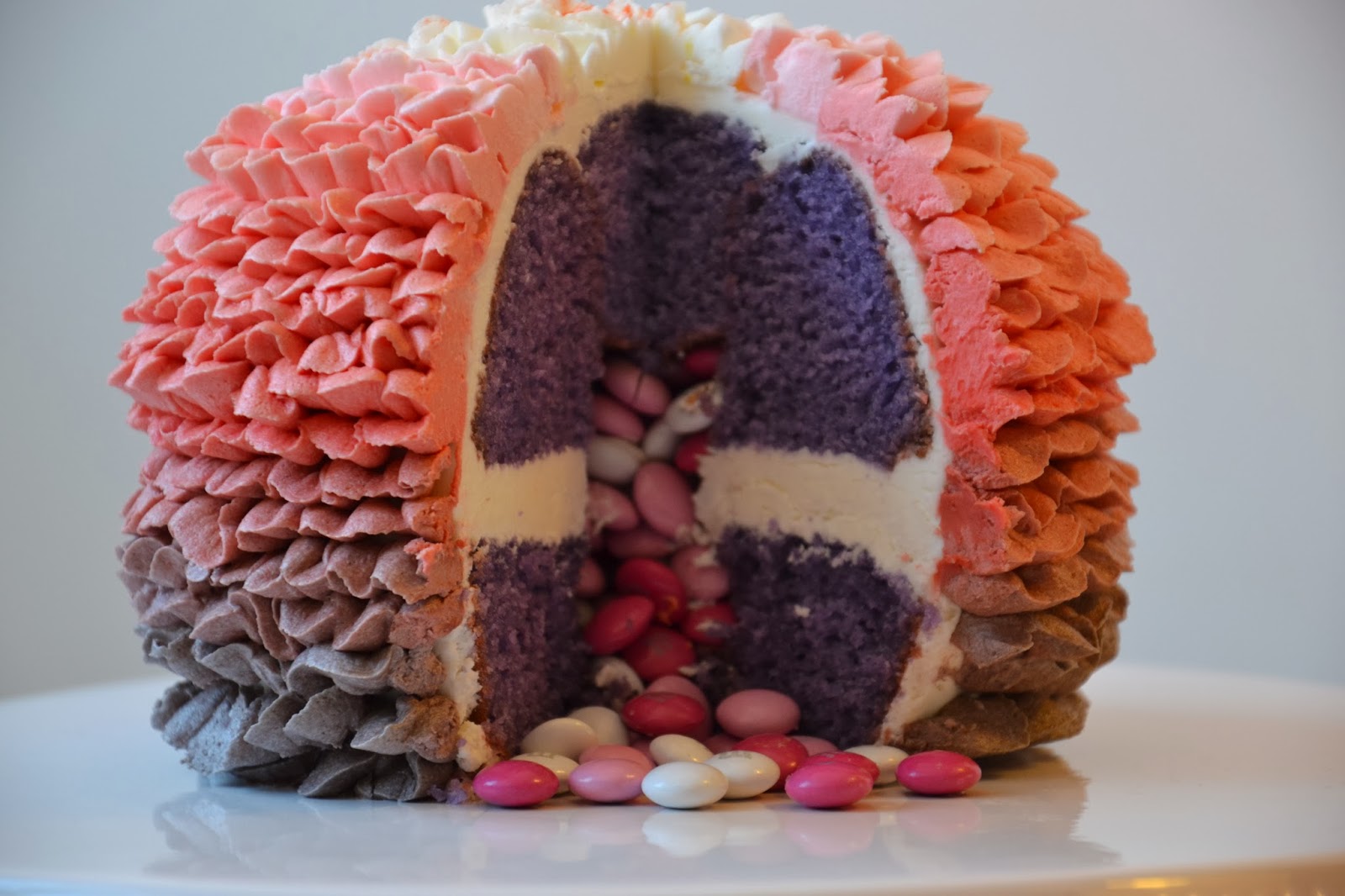 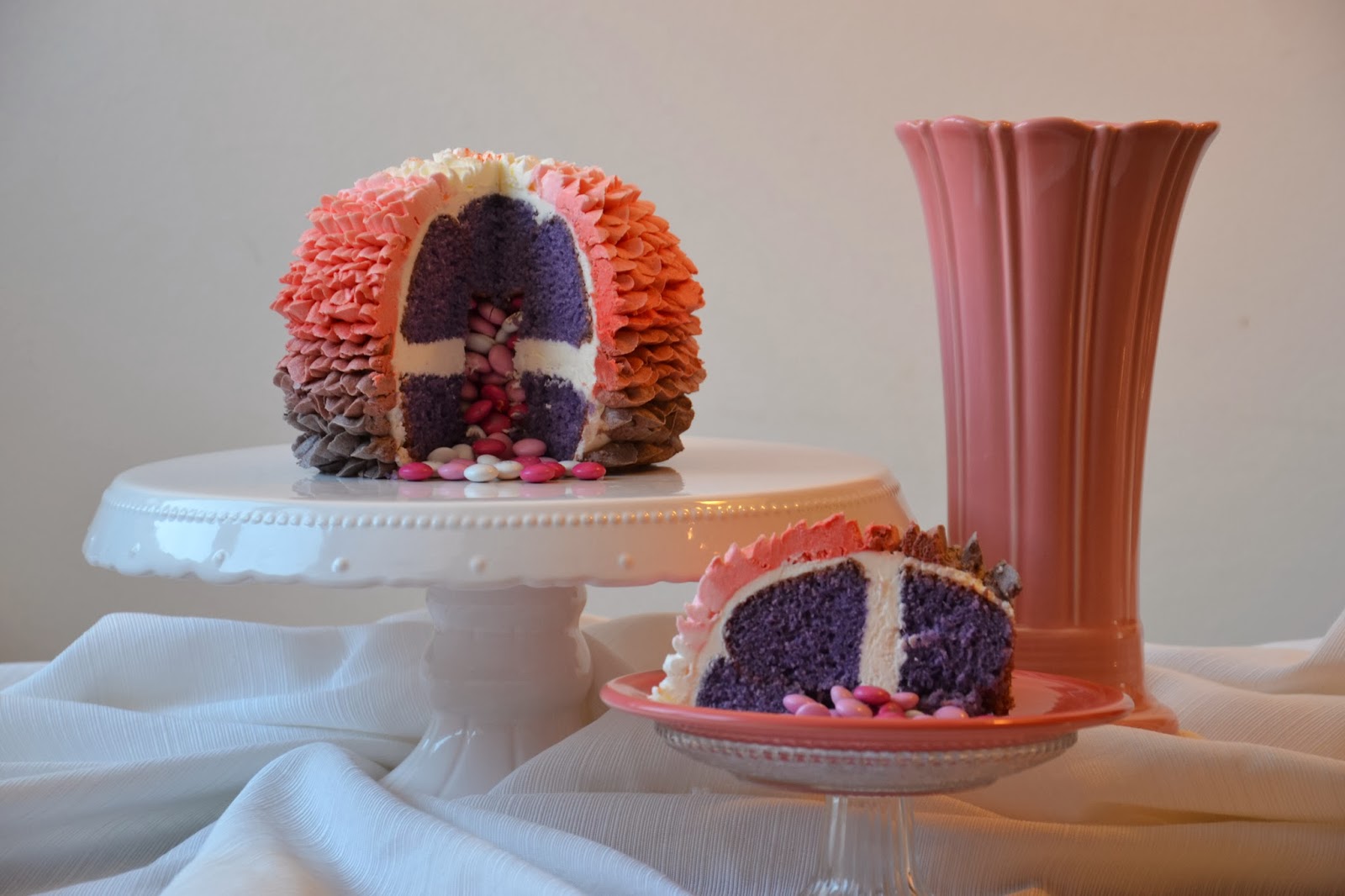 In life, the outcome is often unpredictable and I’m just lucky enough to be in on the ride. Sobriety has taught me that this deal is worth the effort and I need to pay attention. 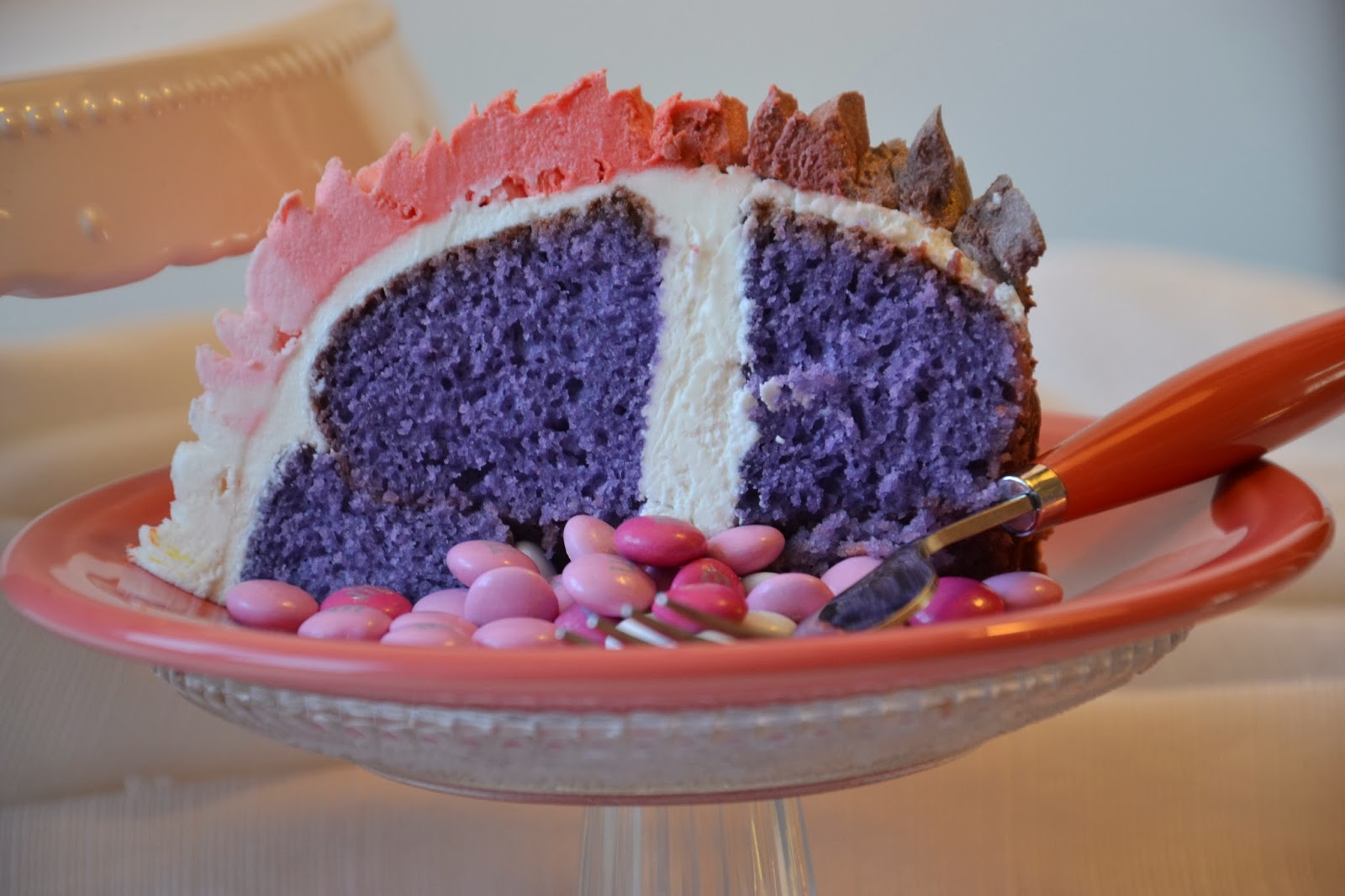