This Red Velvet Button Cake was baked for a special holiday dinner out with friends.  It was a fabulous dinner, even better conversation, and capped off with a wonderful slice of cake.

Of course, Christmas just wouldn’t be the same without a red, red slice of Red Velvet Cake…made all the more scrumptious with a layer of Cheese Cake.  It is also the case that I’ve baked Red Velvet cakes before…and blogged them here, here, and here.  I wanted this cake to taste delicious and look different from the other Red Velvet cakes.

I needed time to think and generate ideas…inside my skill set.  Buttons and small flowers I can do.  Who doesn’t love buttons??

More about working with marzipan… it can’t be rushed, so I started cutting them out approximately two days before I needed them. I kept them loosely covered on a tray and they were still very tasty, soft, and flexible.  Marzipan brings a wonderful almond flavor to the mix.  The texture is quite moist so using a mix of powdered sugar and cornstarch helps prevent from the button from sticking to the round cutter. 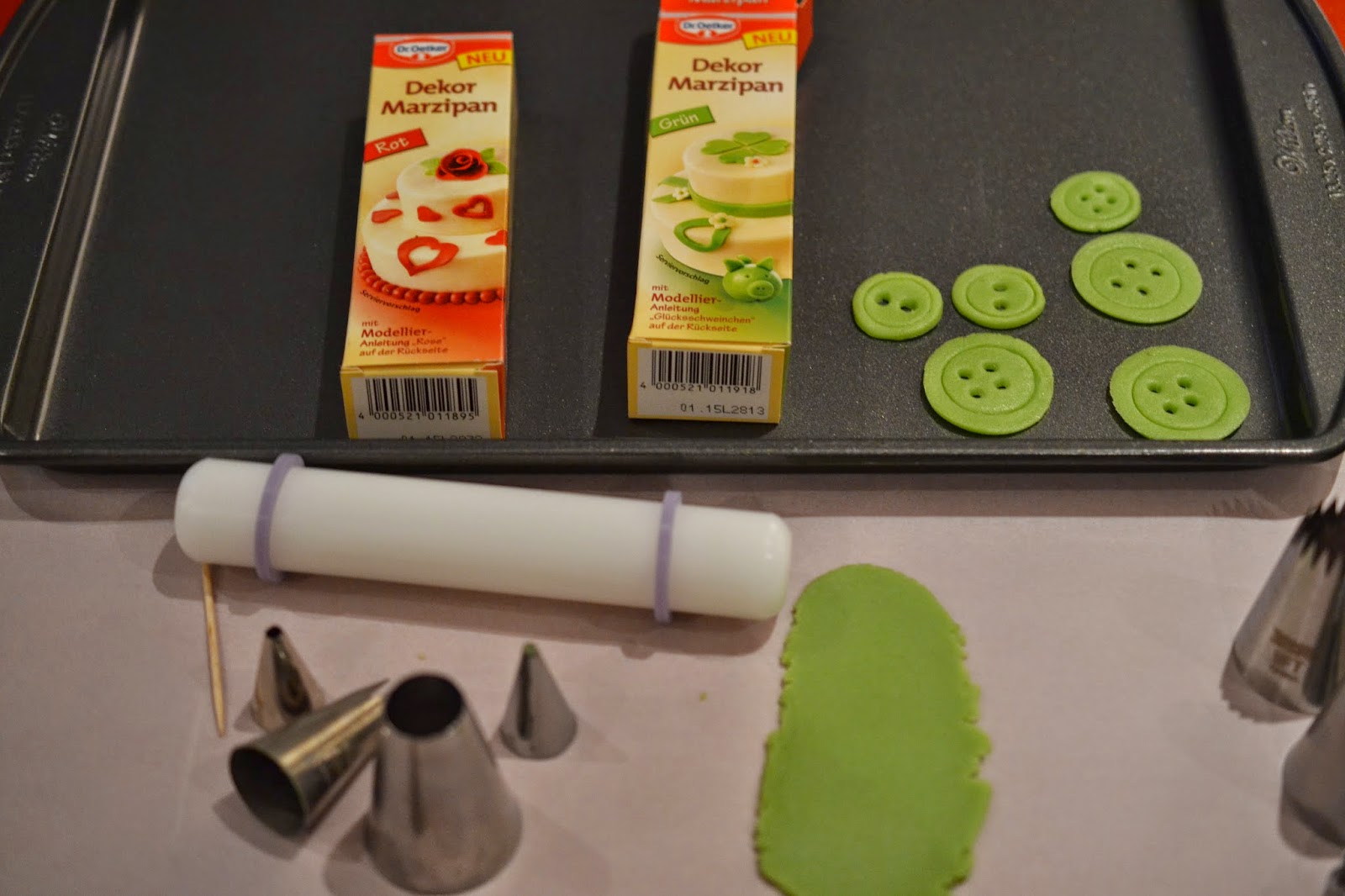 I was thrilled when I found Dr. Oetker red and green marzipan at the nearby Edeka market.  This product is a dream to work with and is already tinted a lovely color.  To achieve the dark green I added a bit of green gel to a small portion light green marzipan (about the size of a large strawberry). For pink, I added pink gel to a neutral, commercially available, marzipan…which is tan in color. 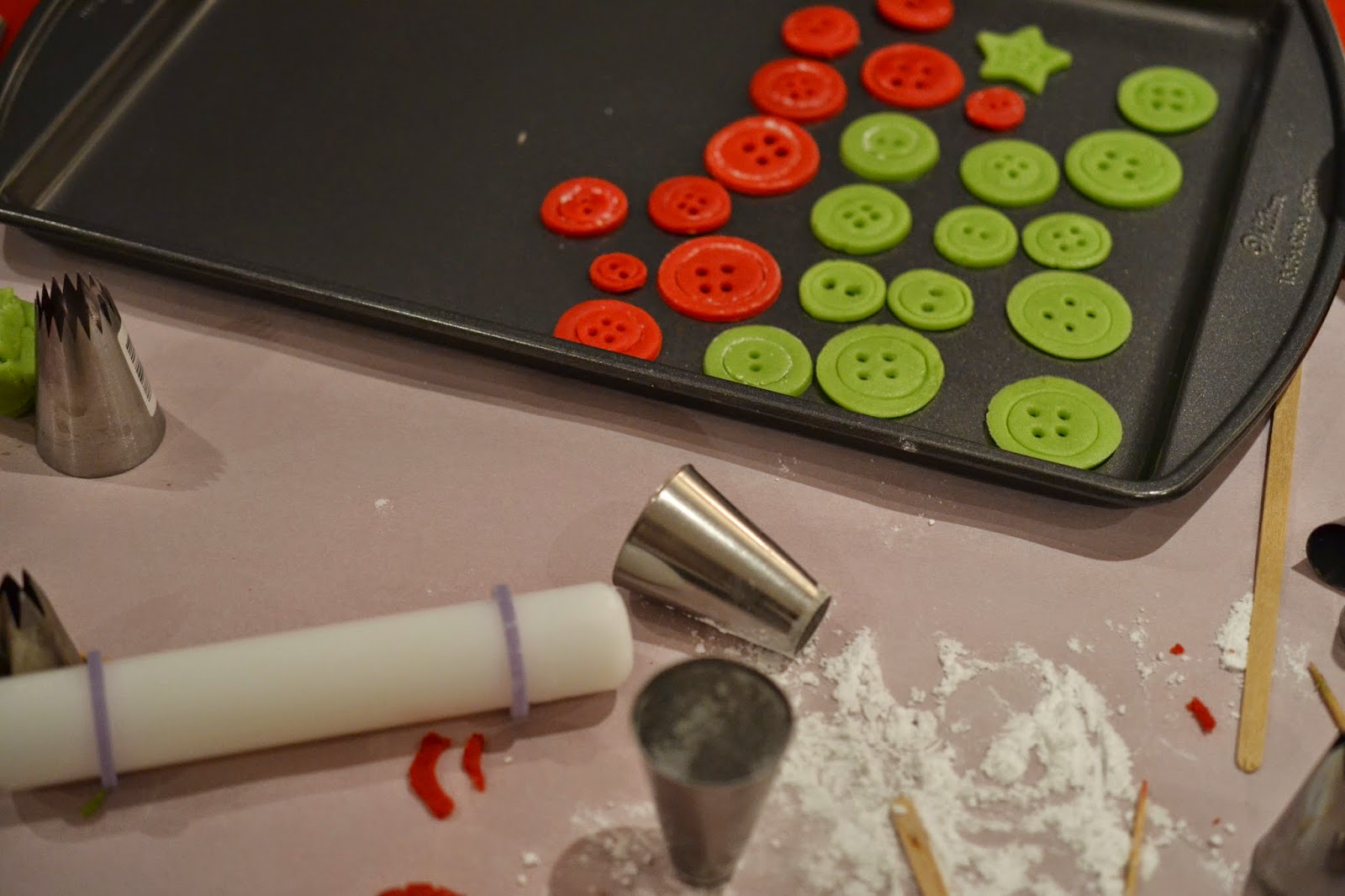 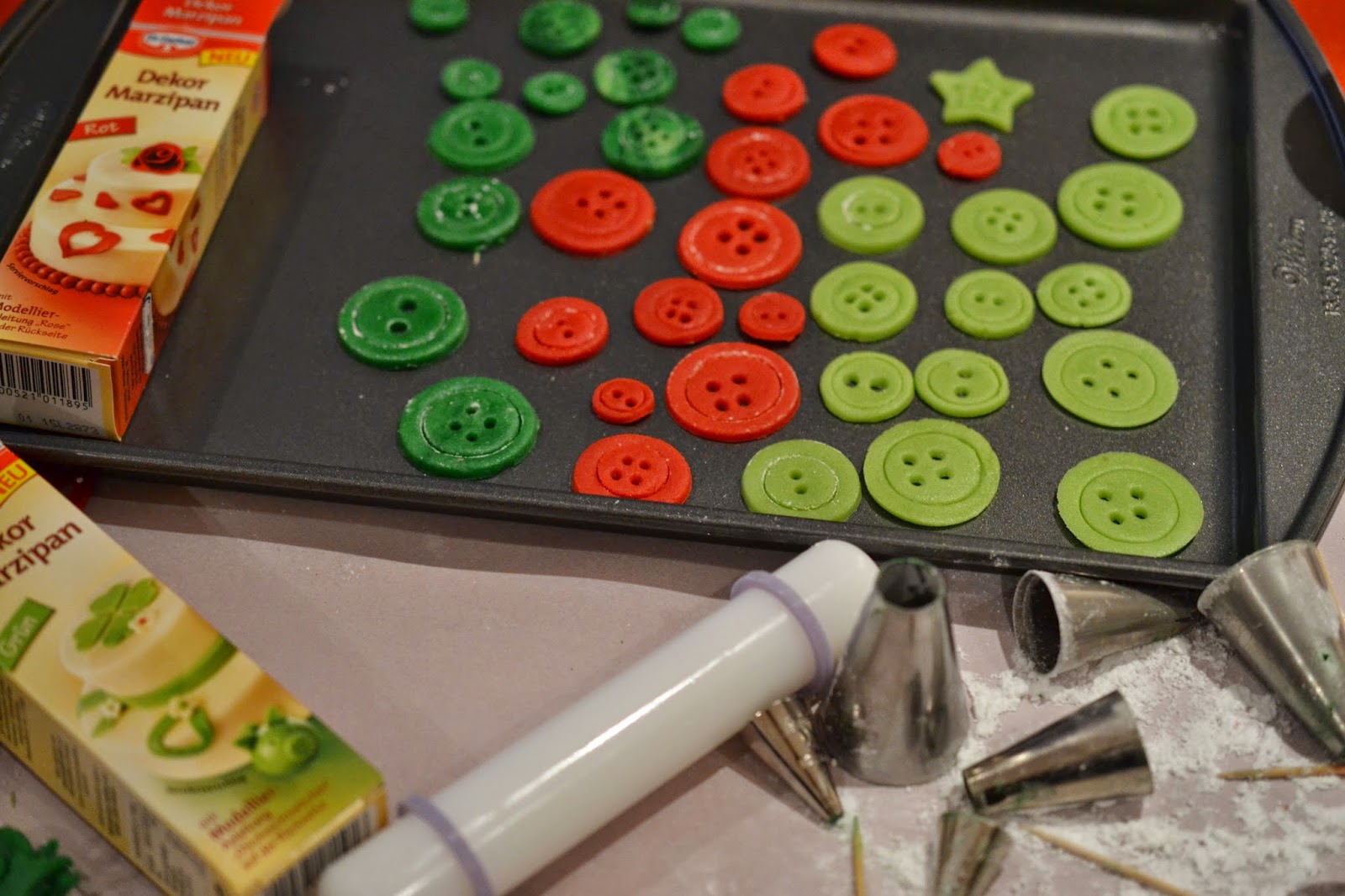 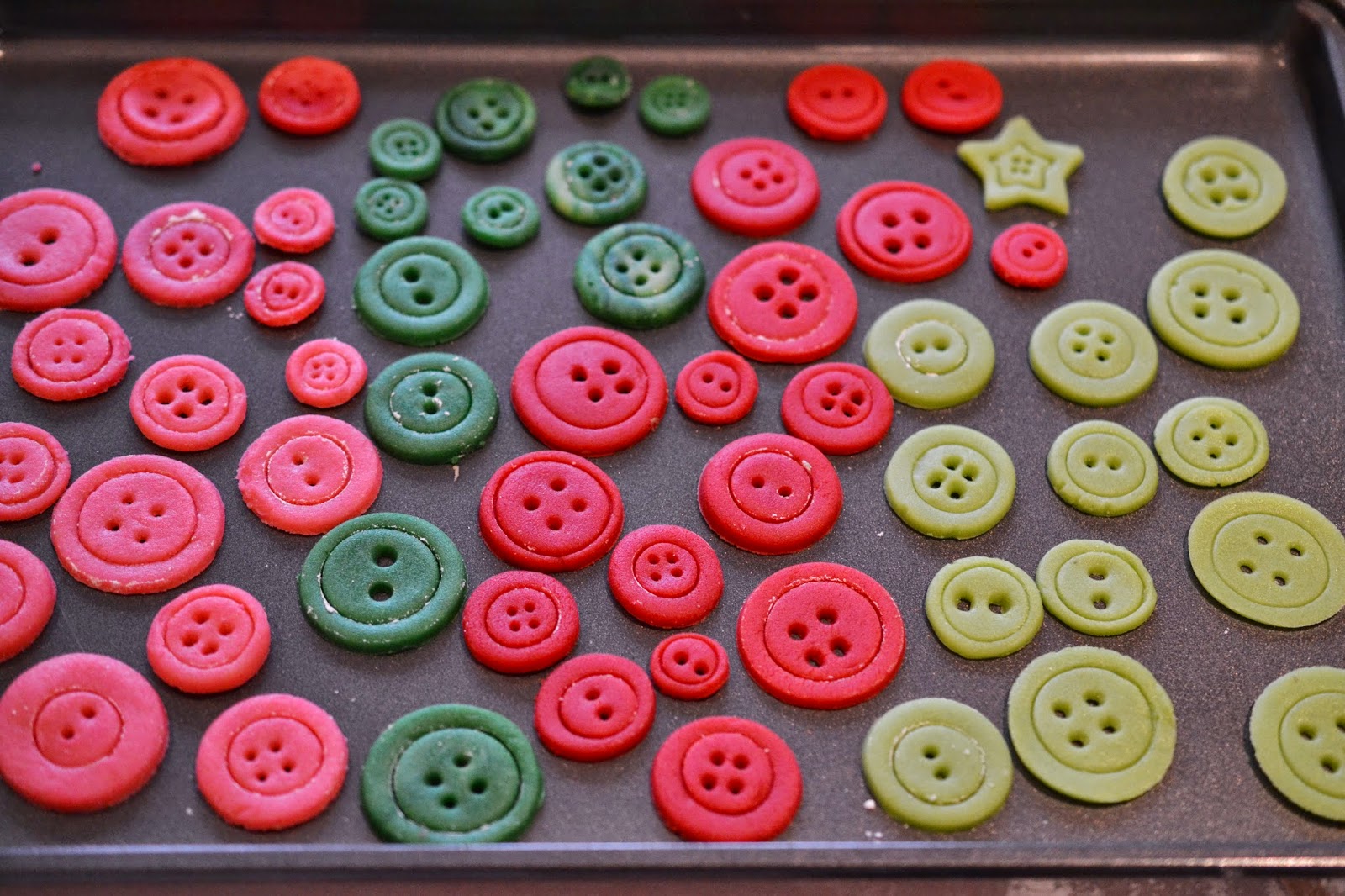 The little flecks of white is the powdered sugar/cornstarch mix I used to release the button from the form.

These are two, 8″ round layers of Red Velvet cake. 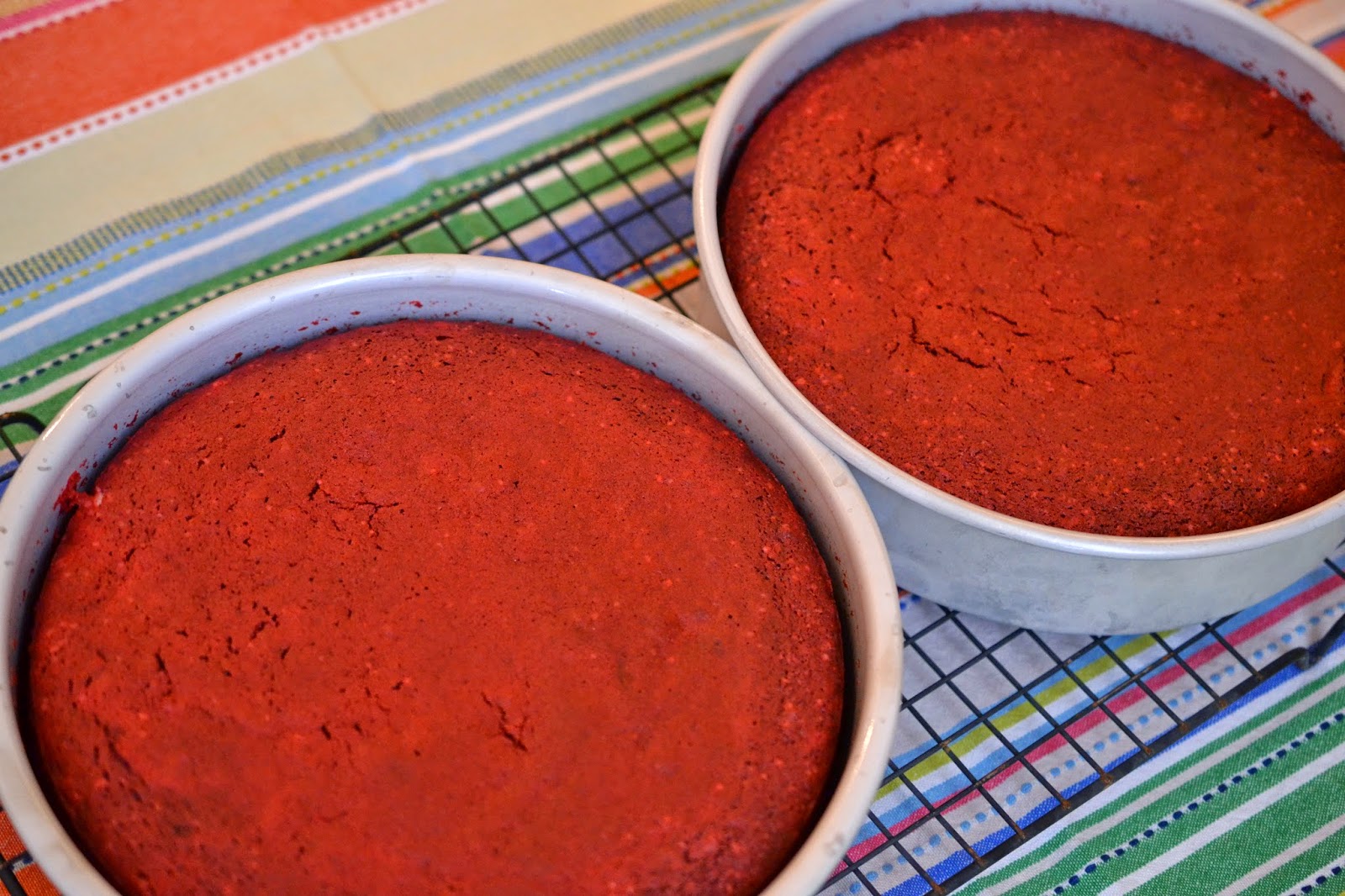 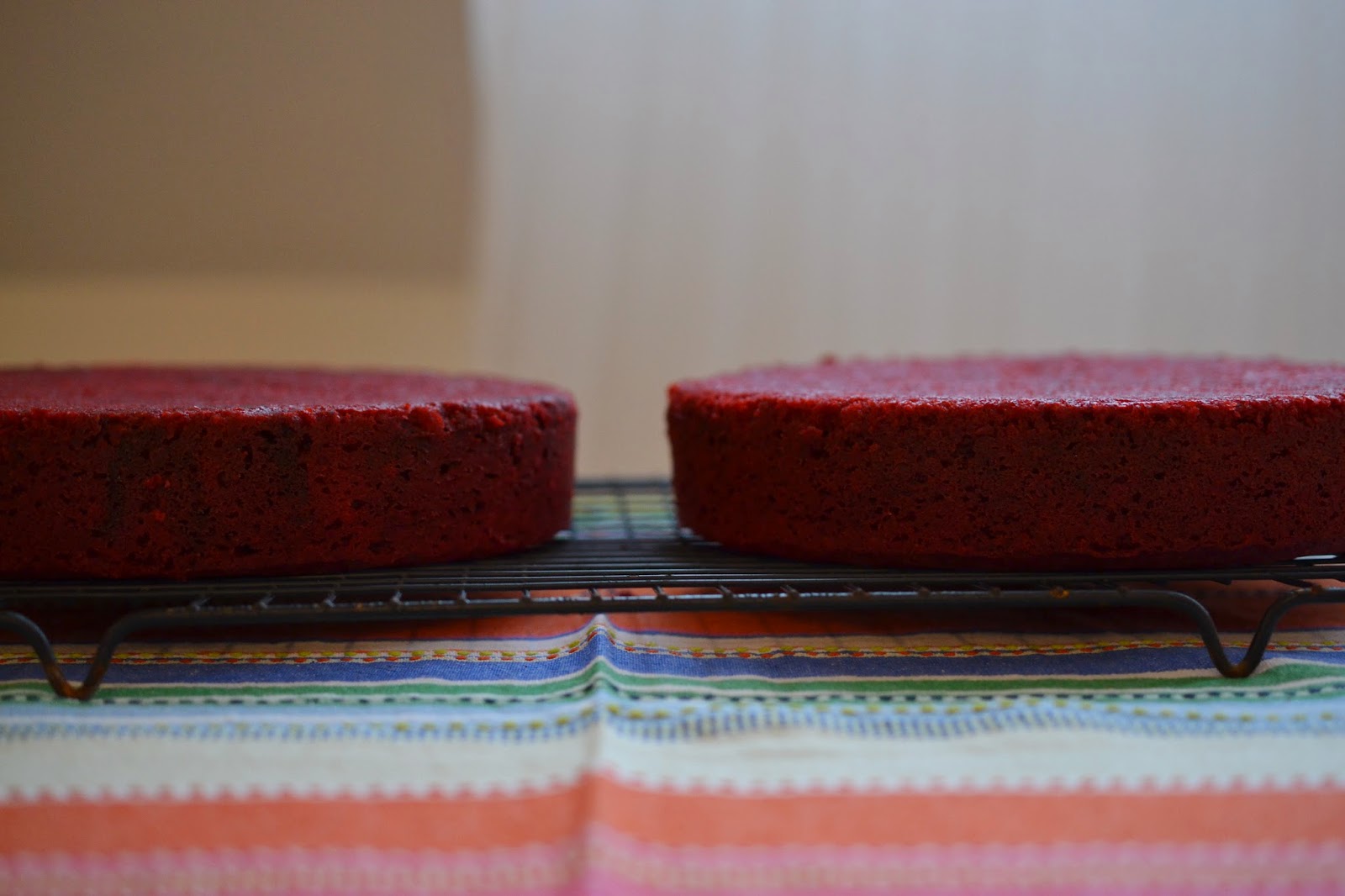 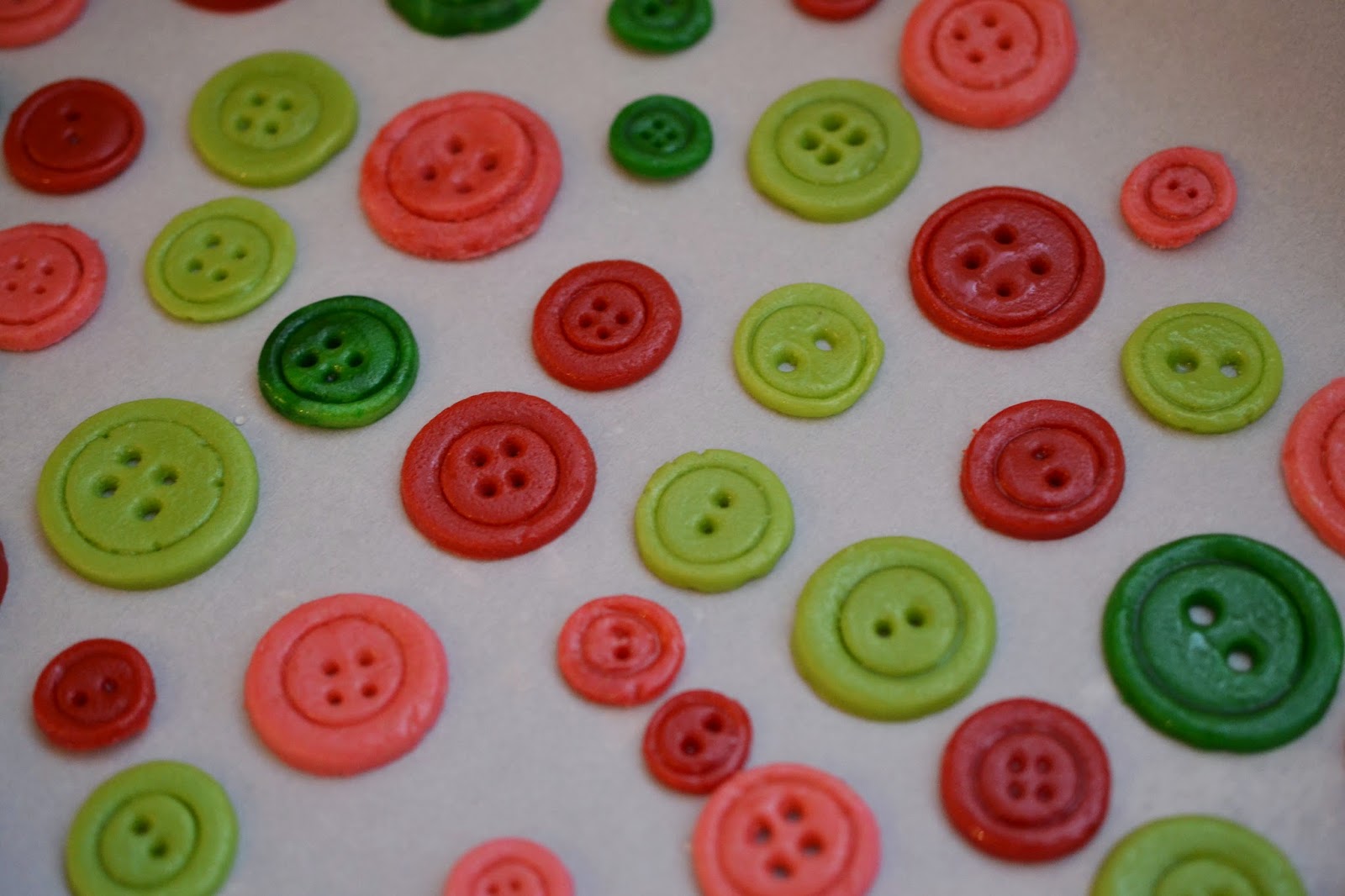 On the morning of assembling this cake, I polished each individual button with a clear syrup (I used Karo, Light Syrup).    I knew the syrup would make the buttons shine and hoped it would eliminate the white powder mix.  There was concern the marzipan would ‘drink in’ the syrup and the shine would lessen – but that didn’t happen.  Yea us! 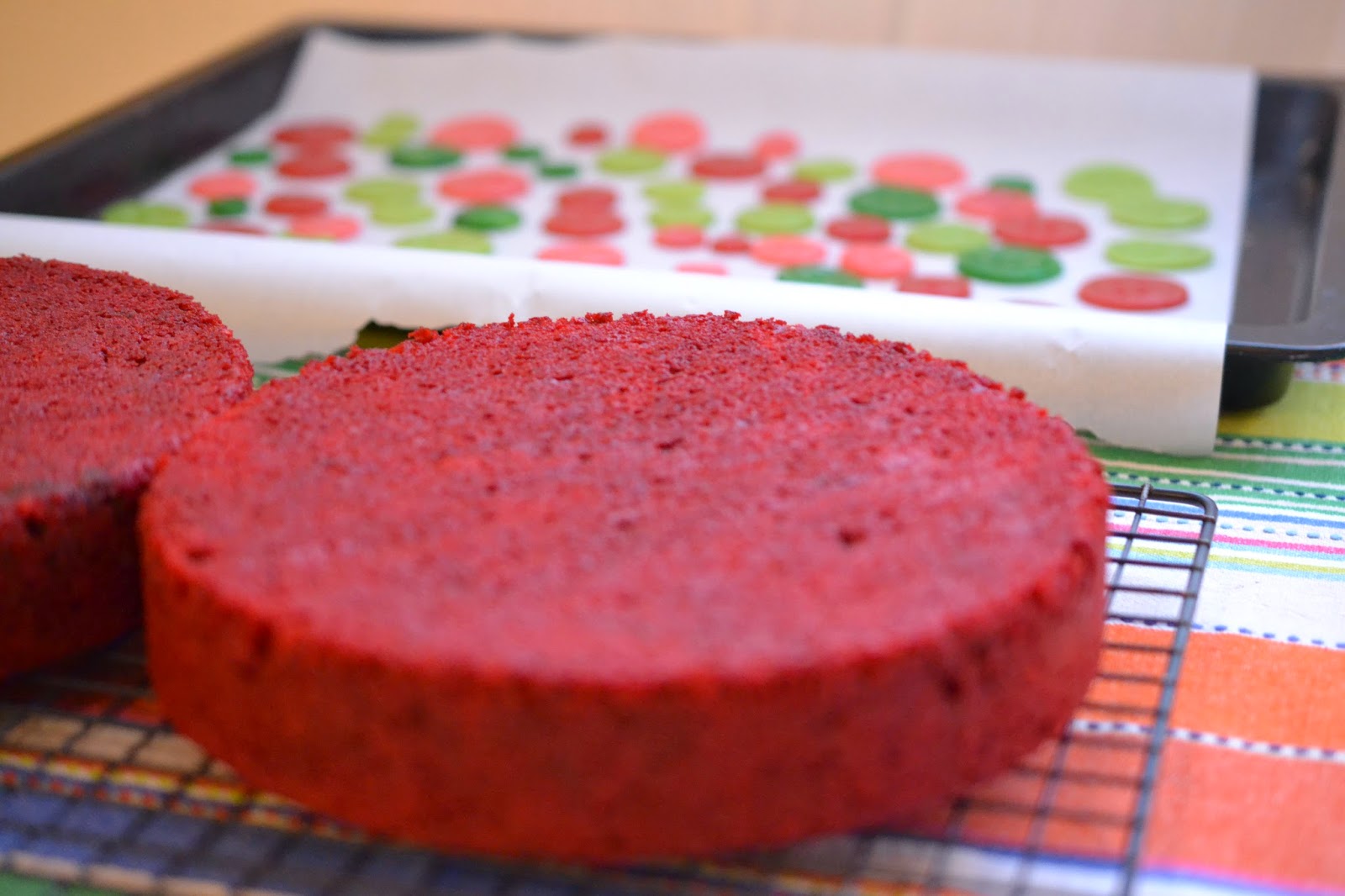 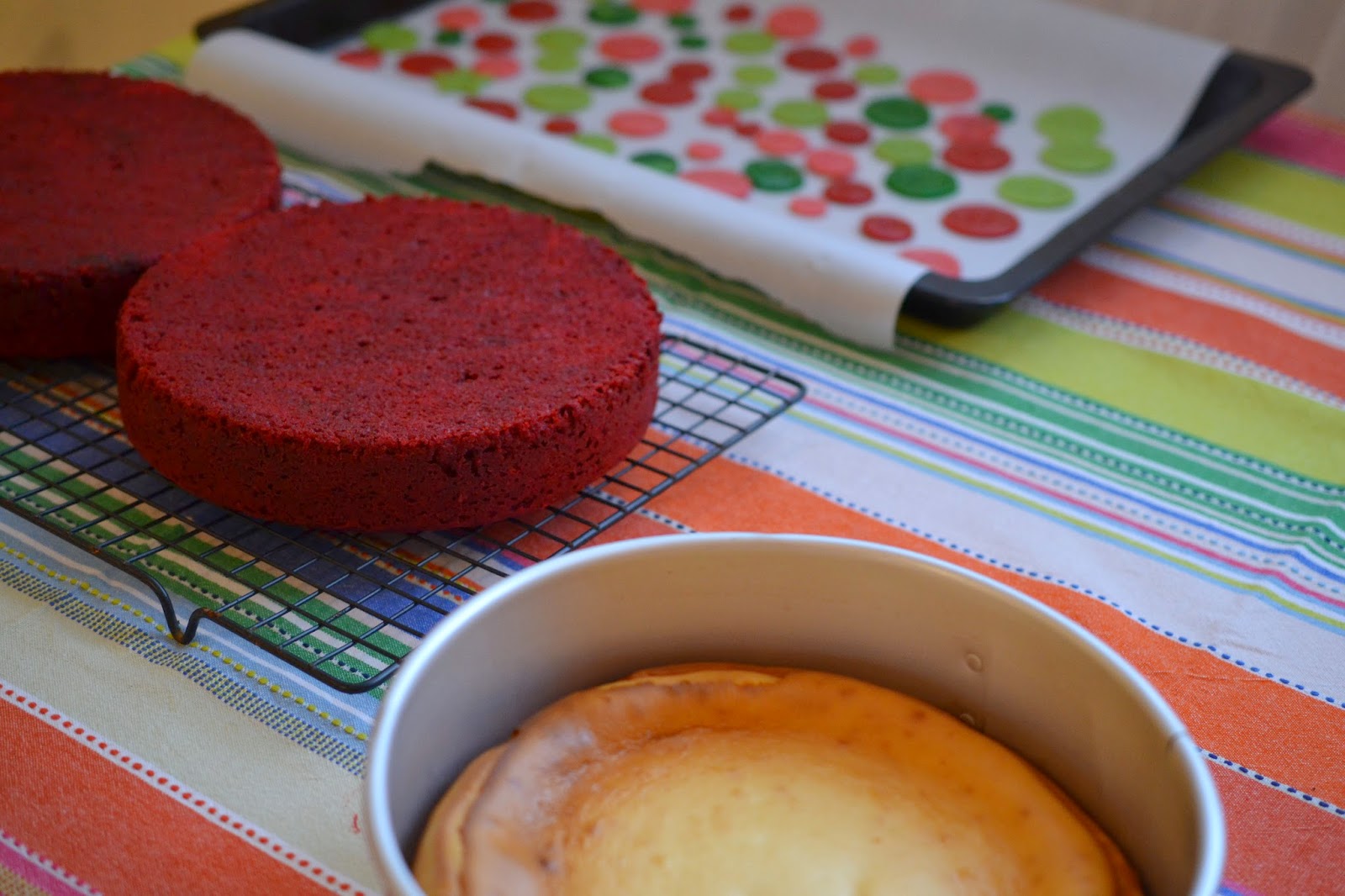 Baking the Cheesecake the night before and letting is set in the fridge is the most ideal way to prepare putting this cake together.  If pressed for time, let the cheesecake set up in the fridge for a minimum of three hours. 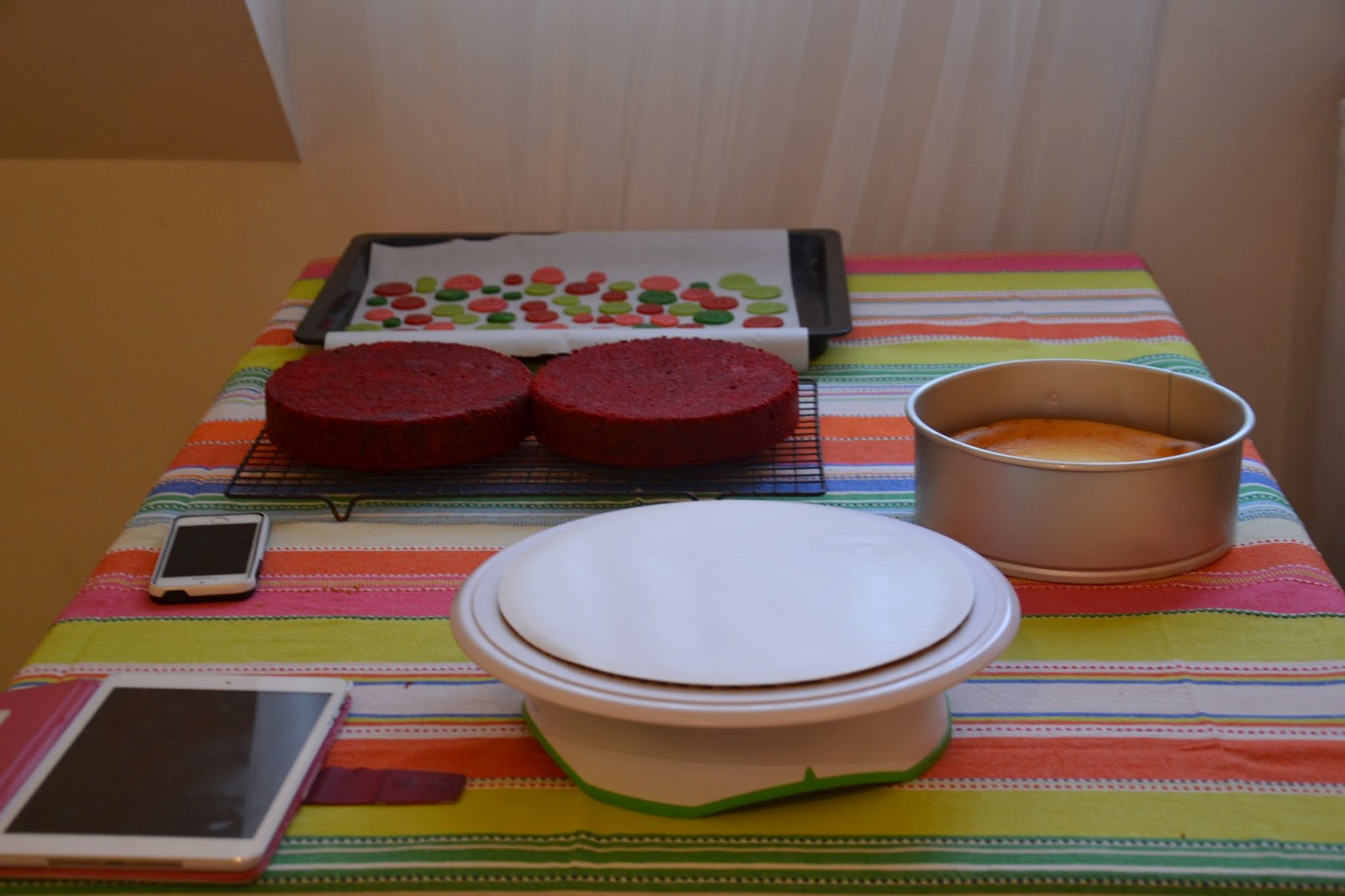 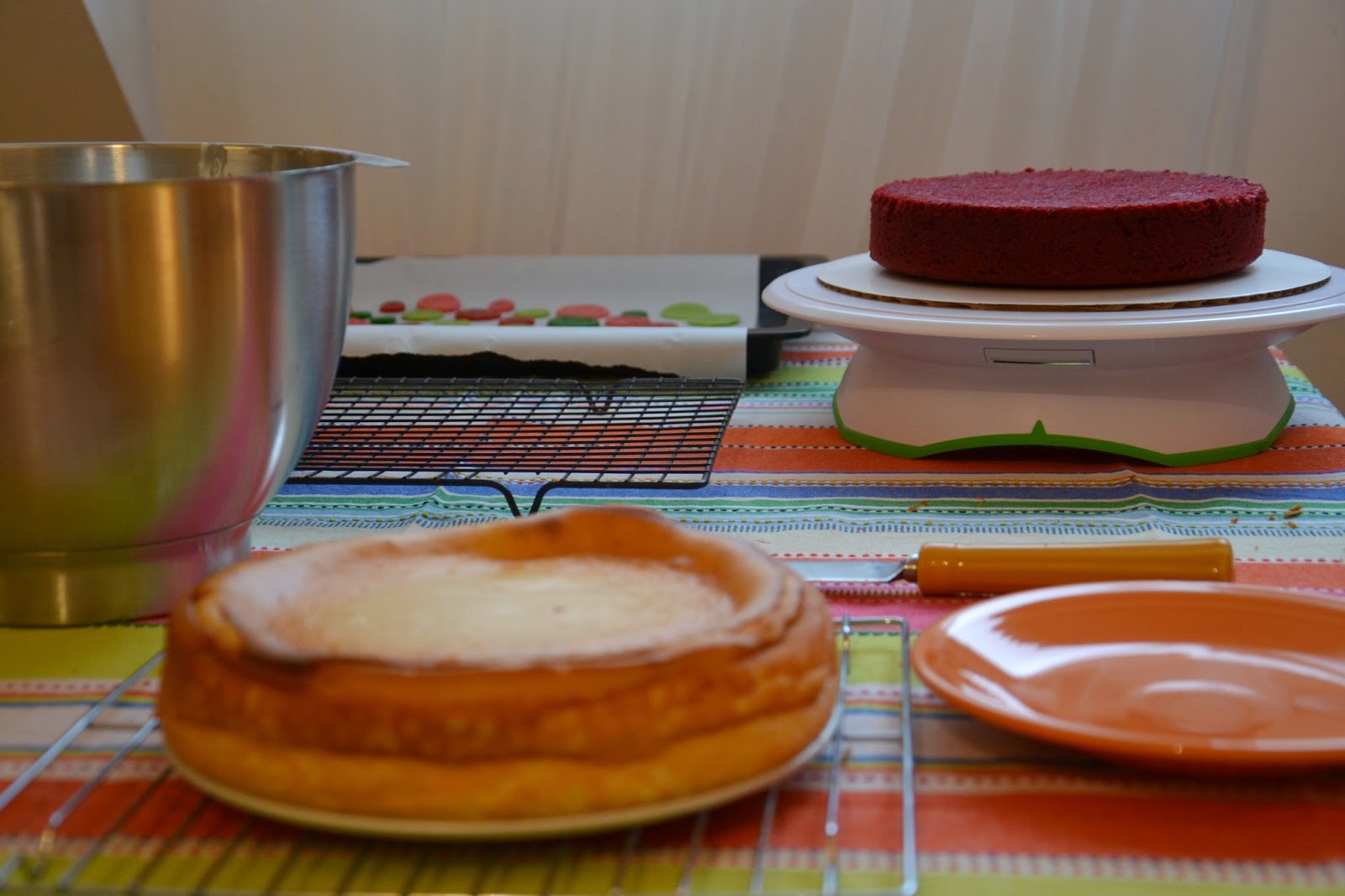 There was just a small bit of cheesecake around the top rim that needed to get trimmed away. 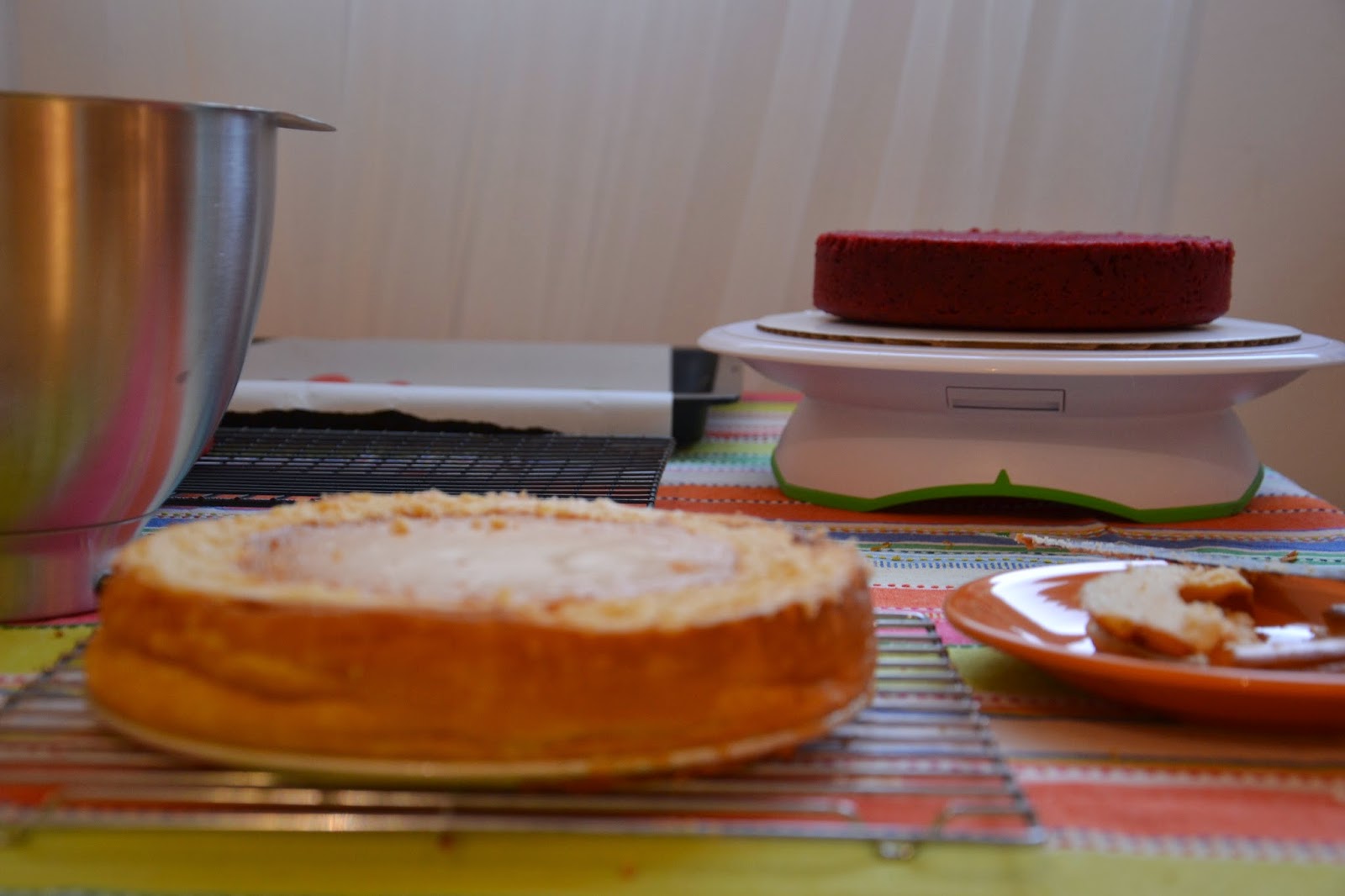 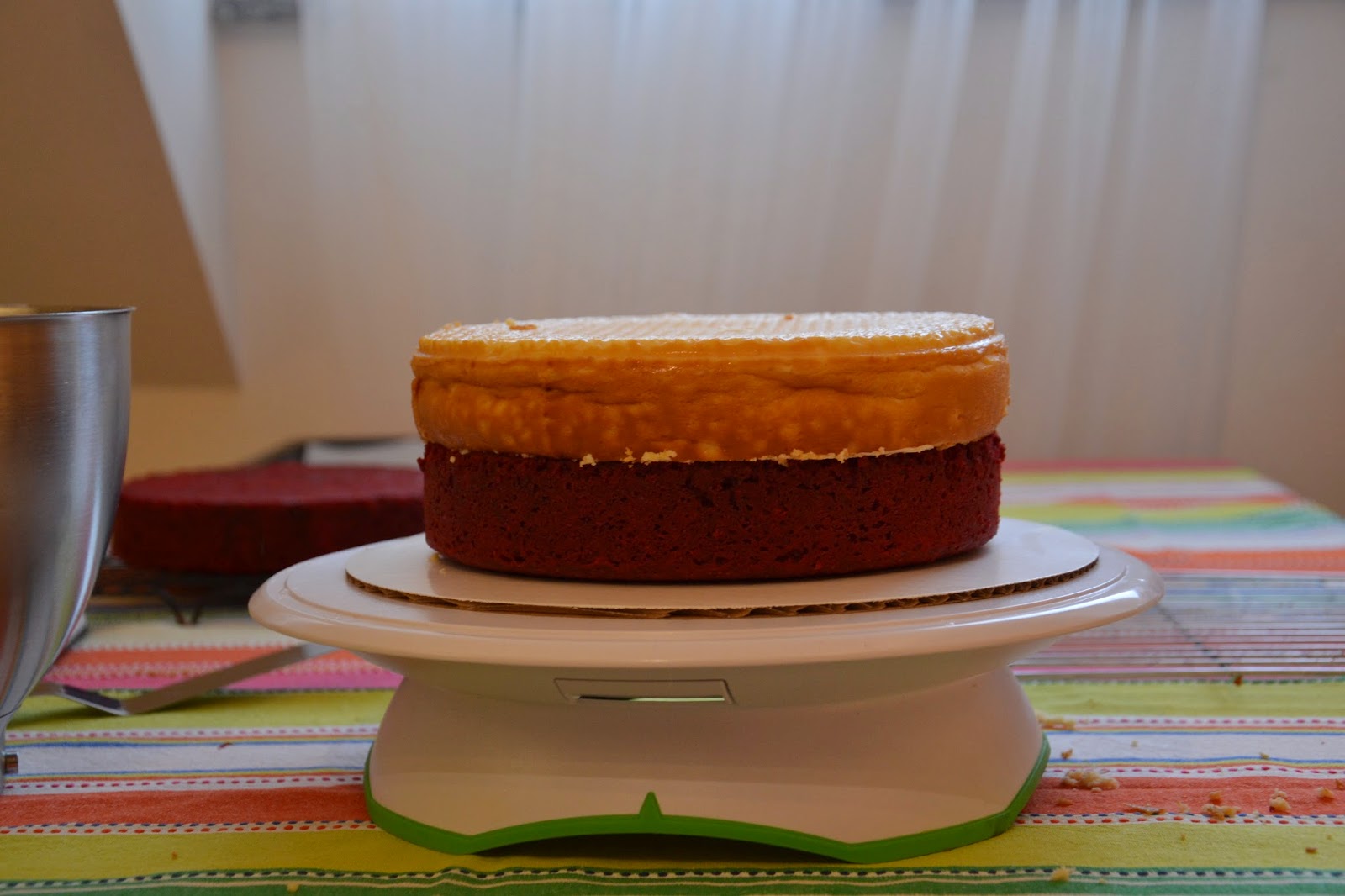 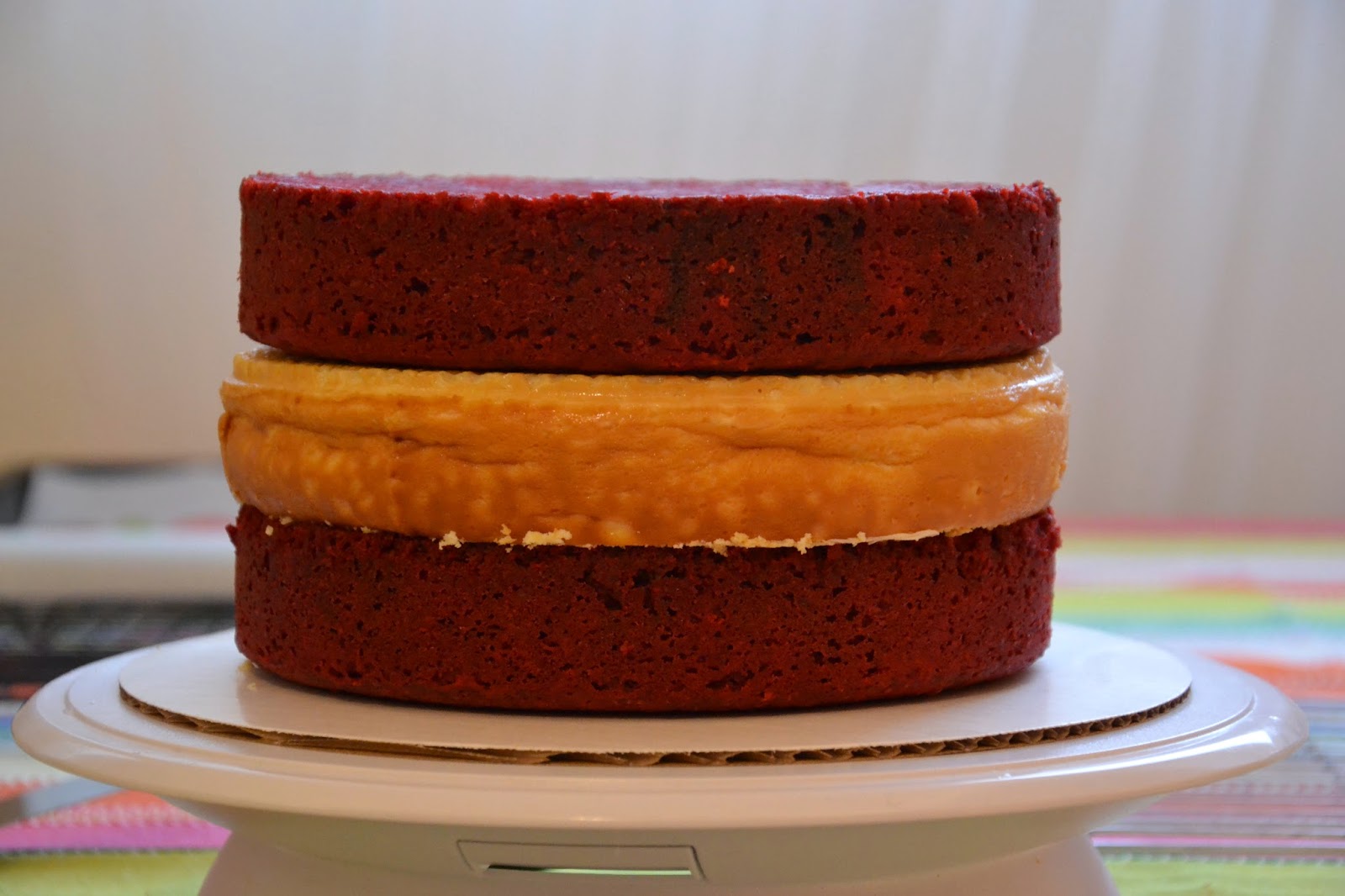 The crumb coat didn’t go as planned…  I applied too much and paid for it later. 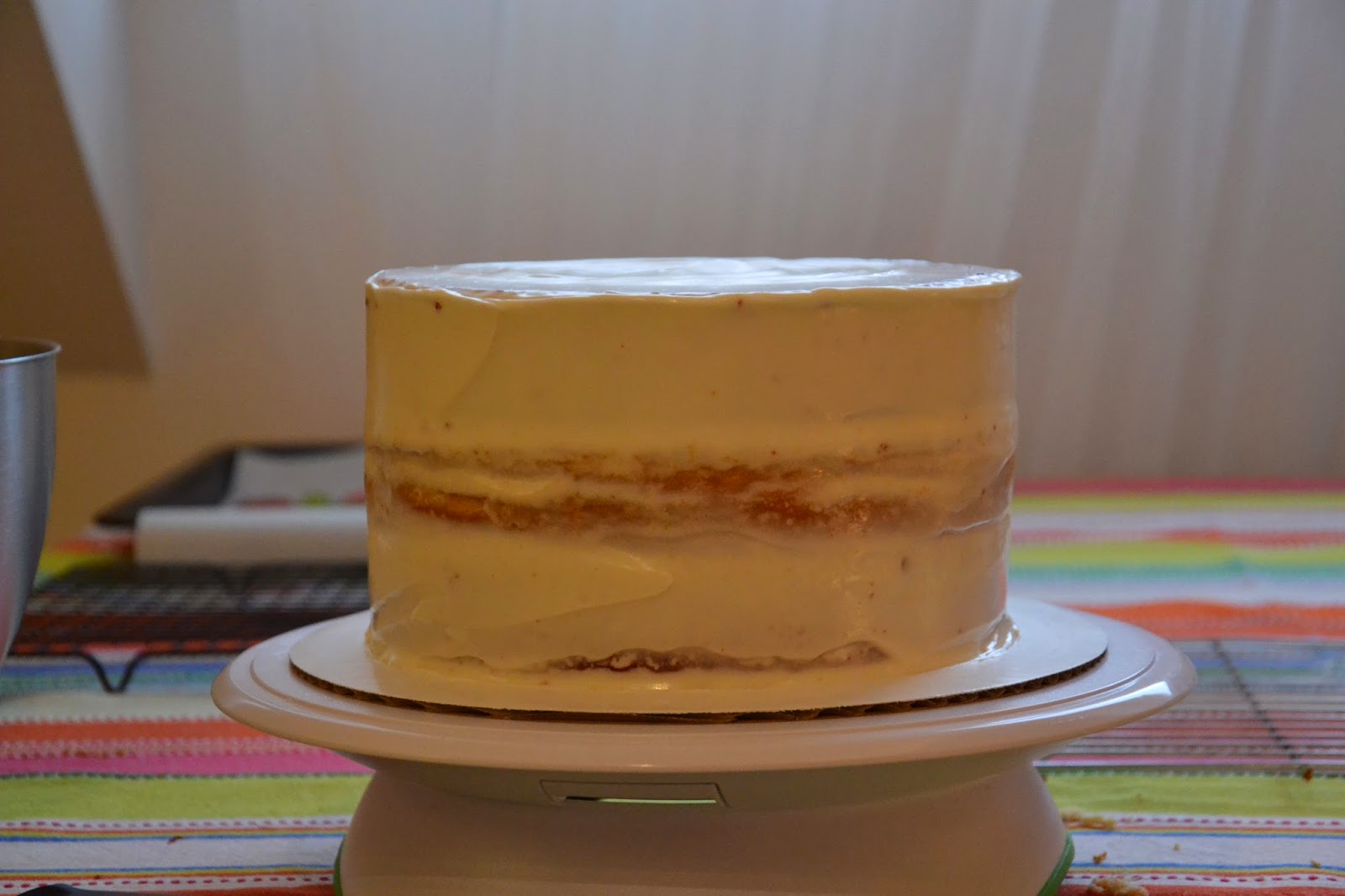 It wasn’t originally part of the plan to frost with a Vanilla Buttercream, but I needed to get the cake done.  Next time, I’ll start all over and remove more of the crumb coat.  It’s a good thing I’m still learning… “Each cake teaches.” 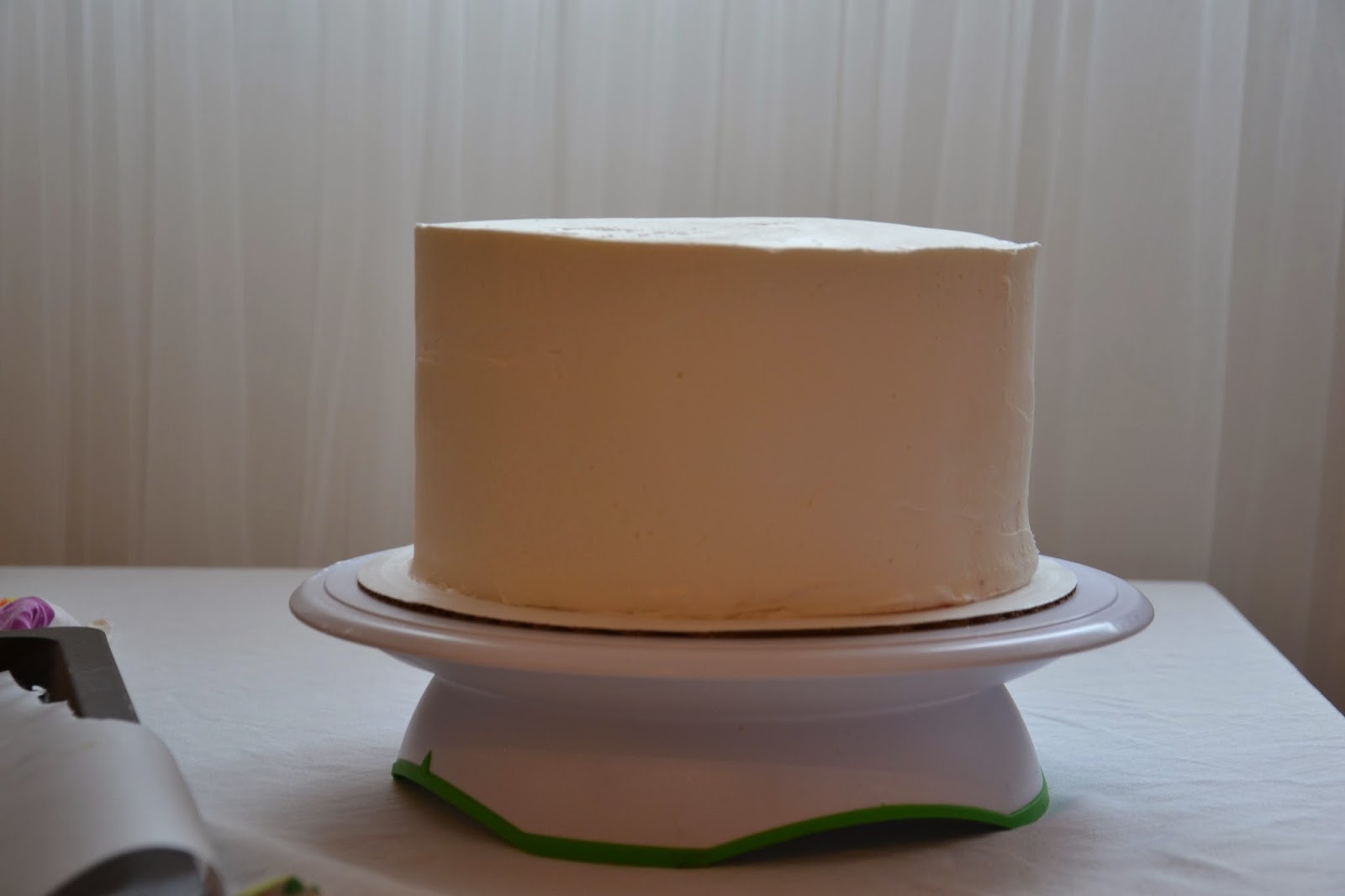 At this point I was ready to work with the buttons and move on.  I wasn’t sure how far up the cake I wanted to go with the buttons, however, not quite halfway was pretty.  Of course, more buttons or fewer is a design decision made by the baker.

Don’t have ready access to marzipan or fondant?  Think outside the box – chewy candy without a hard outer shell or a liquid center will work wonderfully.  Warm up the candy (unwrapped – pop into the microwave for a few seconds, wrapped – put in your pocket for about 30 minutes) then flatten with a rolling pin. Some alternatives to consider:

This was a super fun project!!  Buttons are universal and don’t require language.  “Buttons are the great equalizer.”

My partner carried this cake to our dinner party… he’s used to walking through town and being on the receiving end of the “ooohhs and aahhhs.”  I’m grateful he’s willing to do the heavy lifting, literally and figuratively.  I’m also grateful for the people we raised up.  And sobriety too.