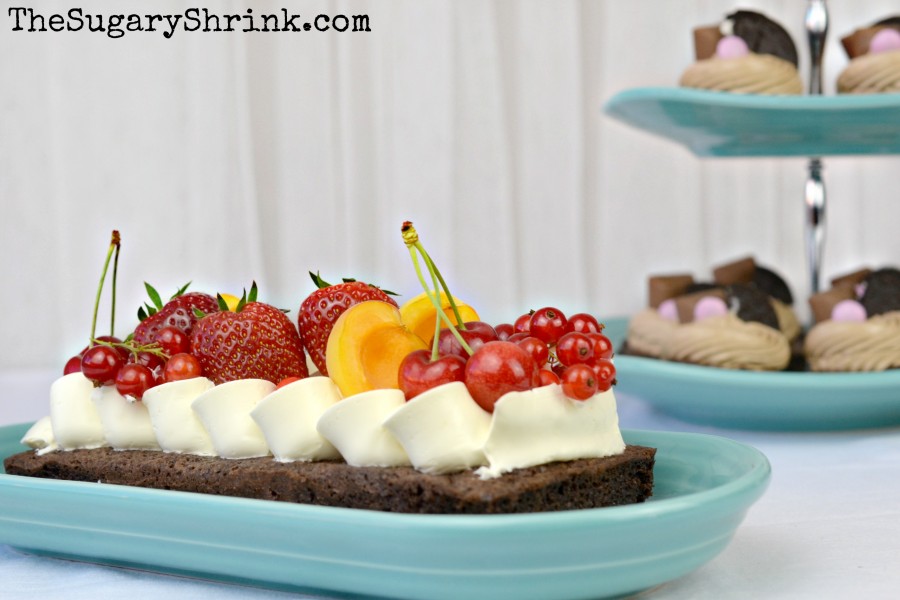 Let’s talk about brownies.  This is a classic and a favorite, easy go-to dessert.  Also, we could bake a batch of these in a minute and have something to carry to a church function, backyard bbq, neighborhood picnic, etc. in no time.

Also, every brownie I ever made until recently was from a box mix.  And that’s ok!  Just know there is a difference in the delicious factor if you haven’t tried baking from-scratch brownies.

Today, I needed something super quick and I had a shelf of brownie mixes.  So let’s get started.

Separately, I baked two boxes of Jiffy Fudge Brownie mix.  This produces a very small batch, but that’s by design.   In the first iteration, I followed the directions… mostly.  Suggested baking pan size is a loaf pan (I’d surely never read that before).  I’ve got one of those!!  My Homer Laughlin Fiesta Dinnerware Foundry Loaf Pan was perfect for this dessert.

Preparing the pan was a cinch – I coated the narrow ends with non-stick cooking spray and wrapped parchment paper from side to side.  This allowed me to lift out the entire brownie in one piece. 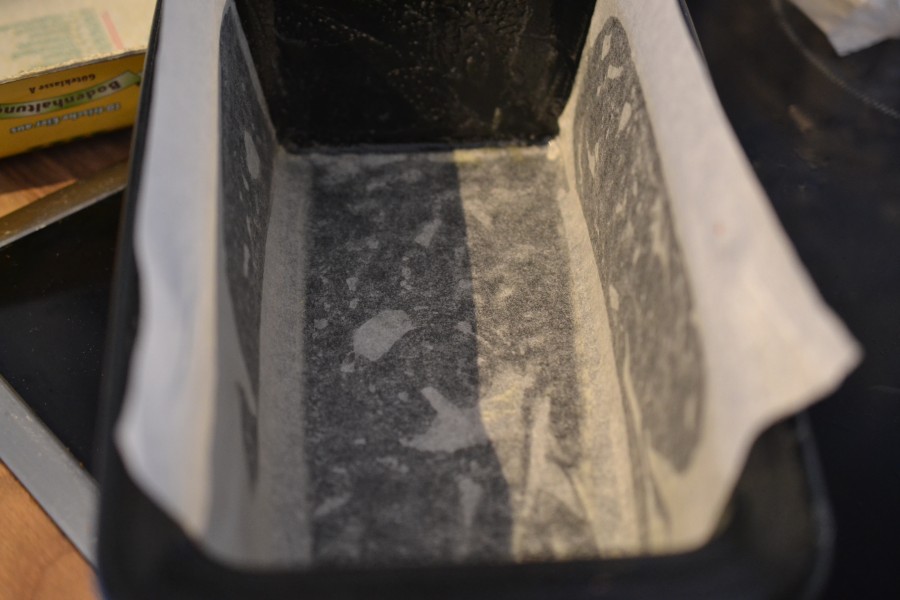 Years ago when our people were still living at home and unemployed (at that time they were kindergarten to grade 7), we watched a lot of Alton Brown after school.  He showed us that if we lightly dusted the chocolate chips with flour, they wouldn’t all sink to the bottom.  It was very sciency, but I think it was something like “friction keeps’m floating.”

Since then, we’ve loved adding chocolate chips to a box mix of brownies – it turns up the volume on the chocolate and I kinda feel like I’m doing my part of the mom-stuff.

When asked how many chocolate chips to add… my answer is always, “Some.”

When asked how much flour to add… my answer is always, “Enough.”

While baking is science (and it absolutely is), this is a place for a bit of wiggle room. 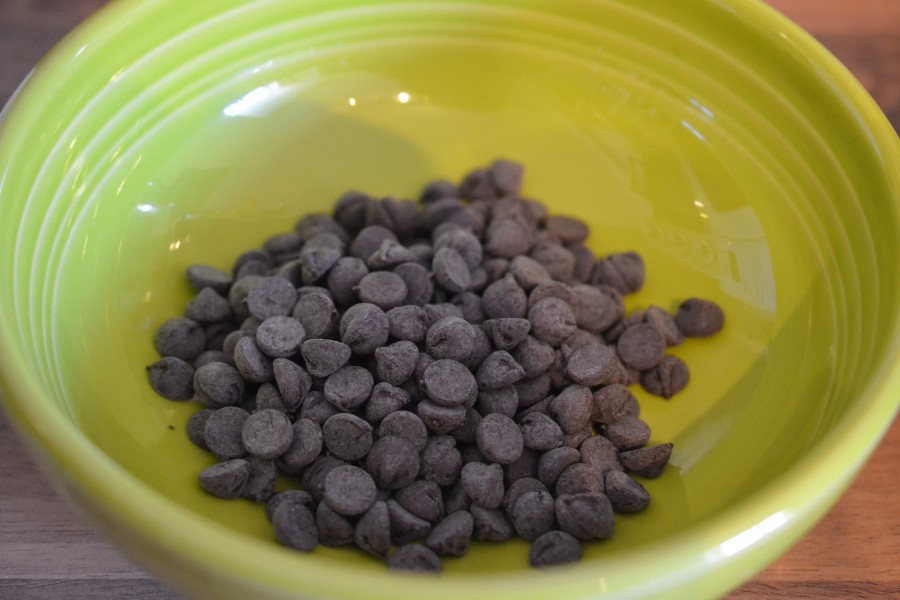 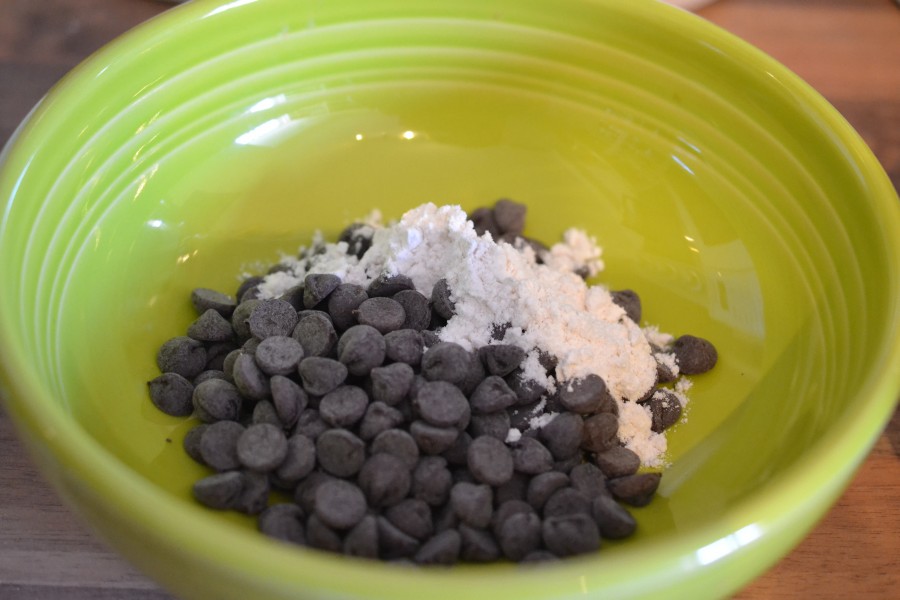 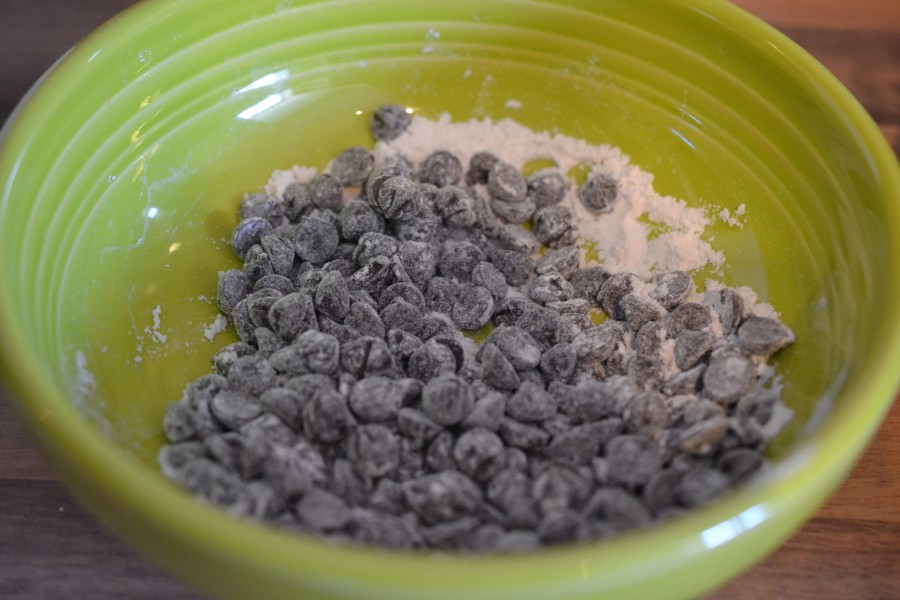 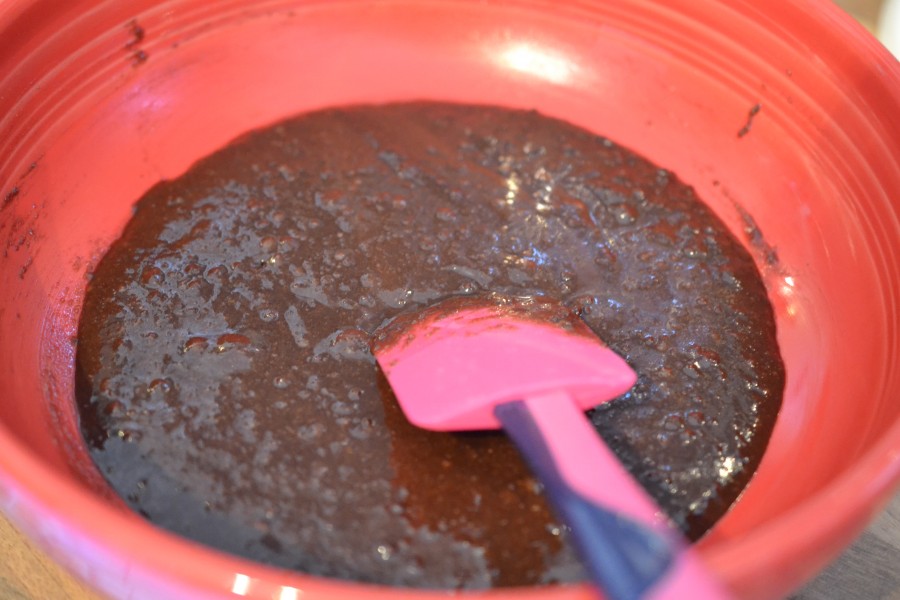 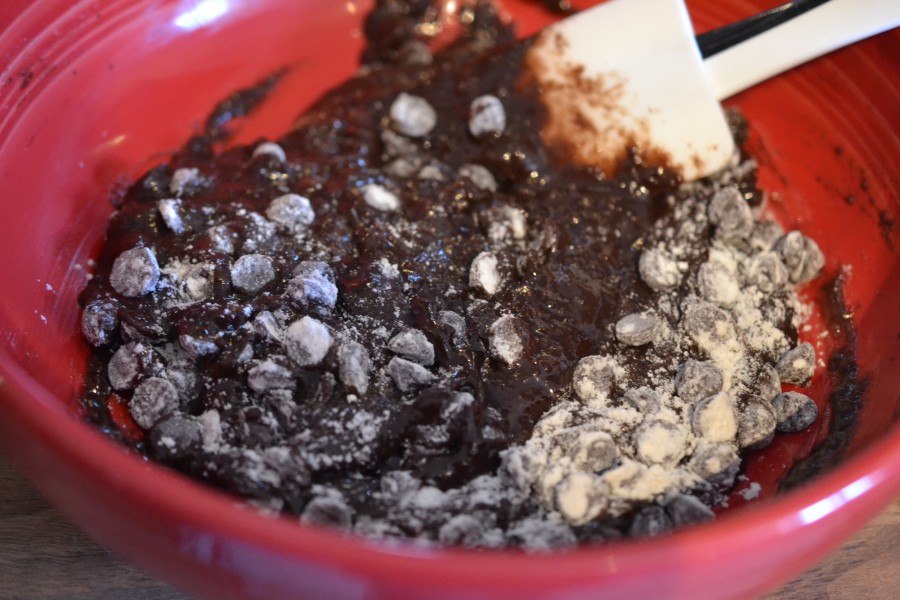 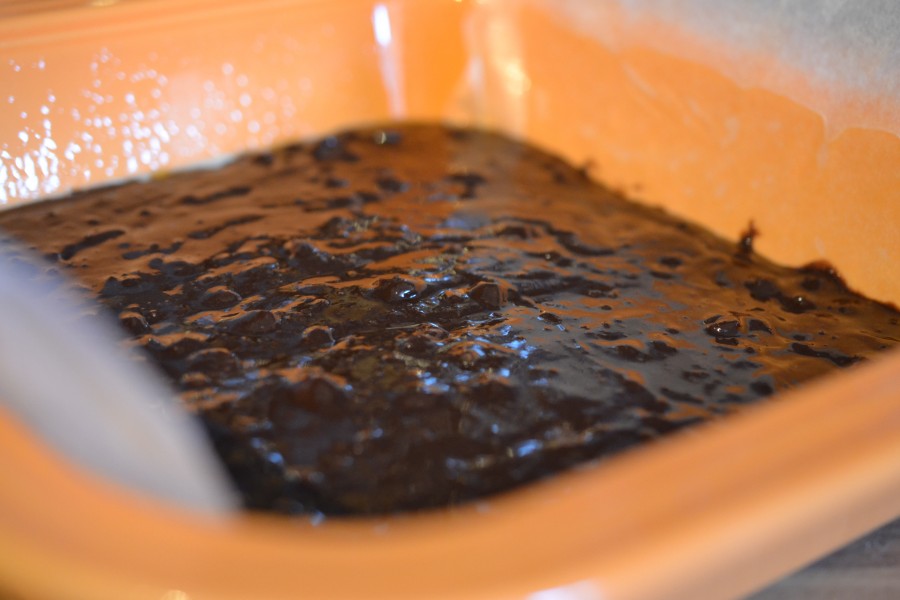 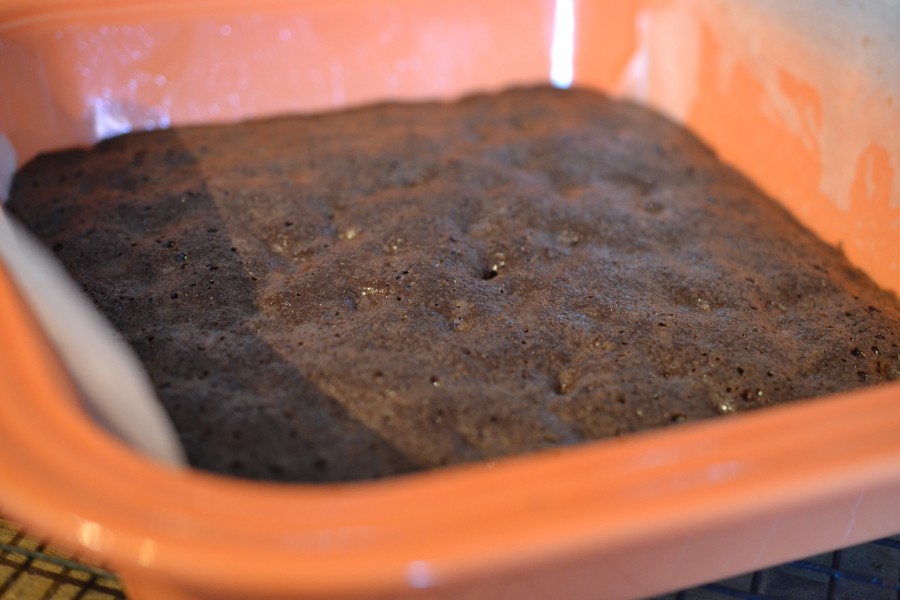 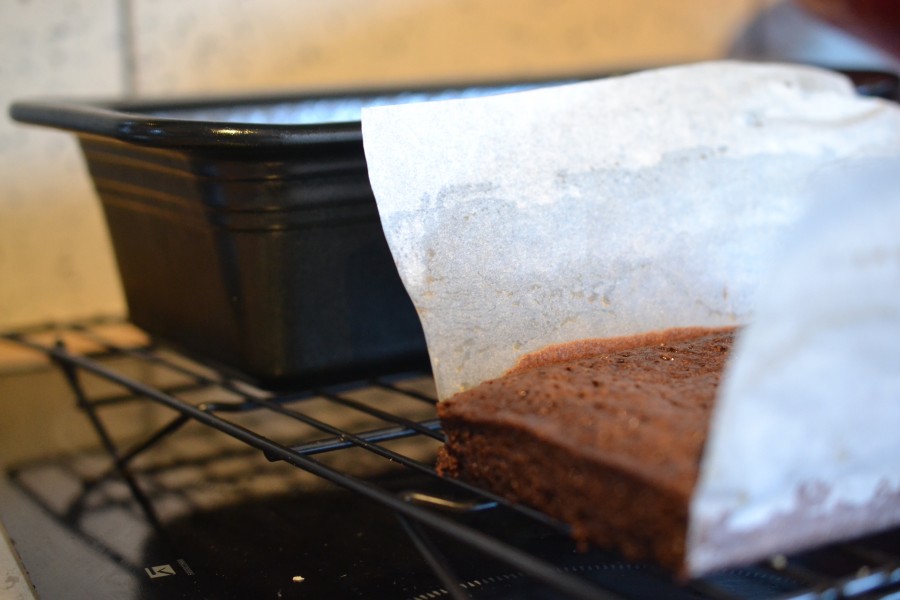 With the baking done and while everything is in the process of cooling, it’s time to prepare the Swiss Meringue Buttercream.  This was a bit of a test kitchen moment.  While I’ve been dialing in the SMB (and I’m in love)… I wasn’t sure what temperature it deconstructs.

I learned a couple years ago that 30C is the magic number for American Buttercream – it completely looses it’s infrastructure at that temp.

Good news!  The Swiss Meringue Buttercream was still standing in the blistering 34C!  I donated the brownies to LadyFest Heidelberg 2016 and these desserts traveled quite well on the short walk, bus, and strassebahn to get to the event.  Me on the other hand … I was totally melting in the heat.

Back to baking… So I made Vanilla and Chocolate.  Adding chocolate to SMB is incredibly easy – simply melt the chocolate, allow it to cool, and add it at the end of the mixing when the buttercream has come together.  Sweet. 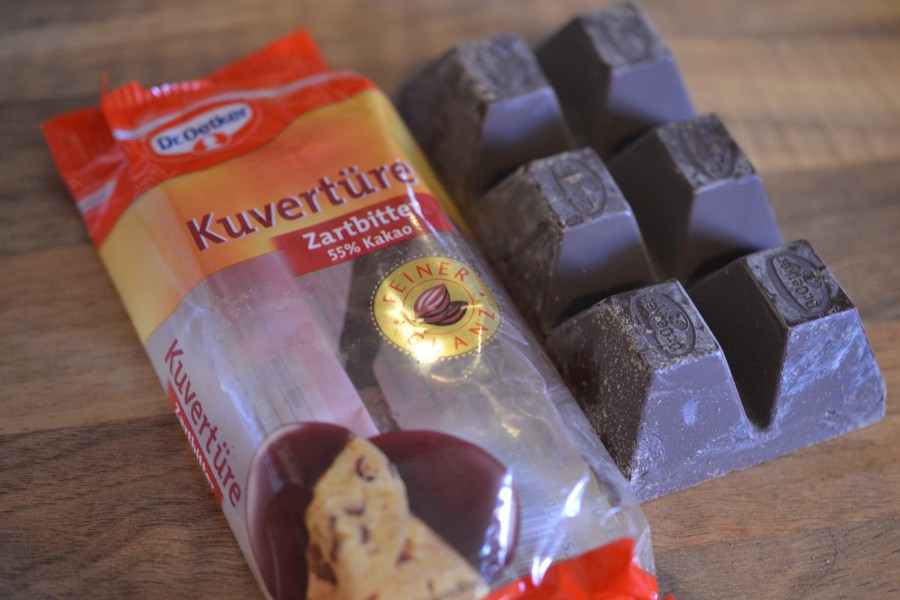 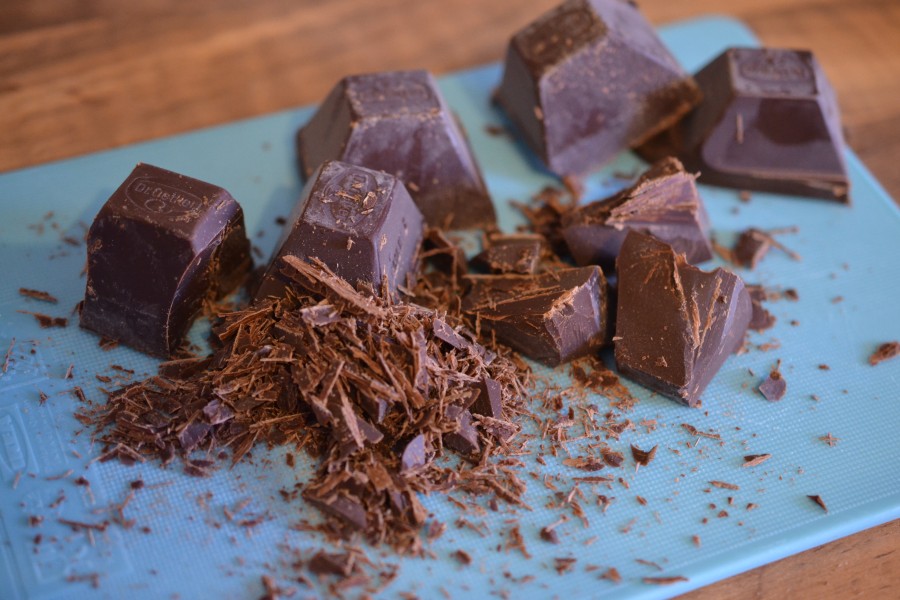 I gave the chocolate a bit of a chop and added a few more chocolate chips.  This is the melt after 40 seconds. 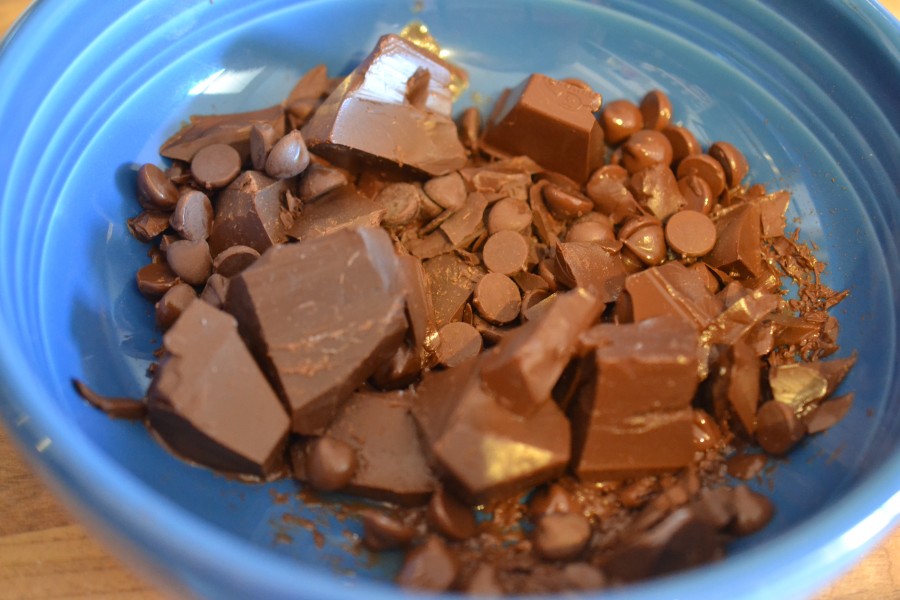 Two minutes later, I was much closer. 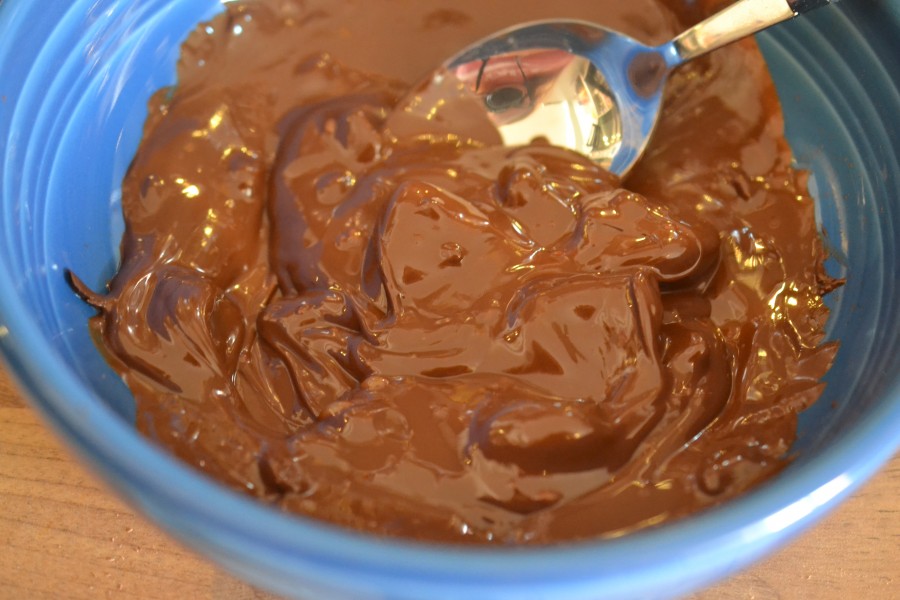 After a good bit of stirring, it only needed a wee bit to get to smooth and shiny. 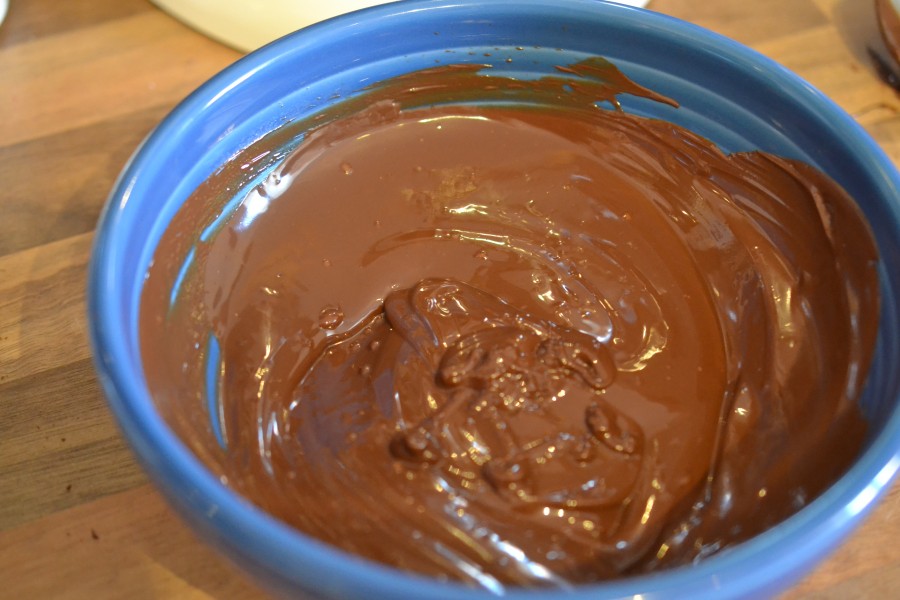 Comparing the height of each brownie batch according to pan size.  On the left is the loaf pan and on the right, I used a square baker.  It’s quite thin, but that was just right for what I had in mind.  Each was firm and chewy… sounds kinda brownielicious. 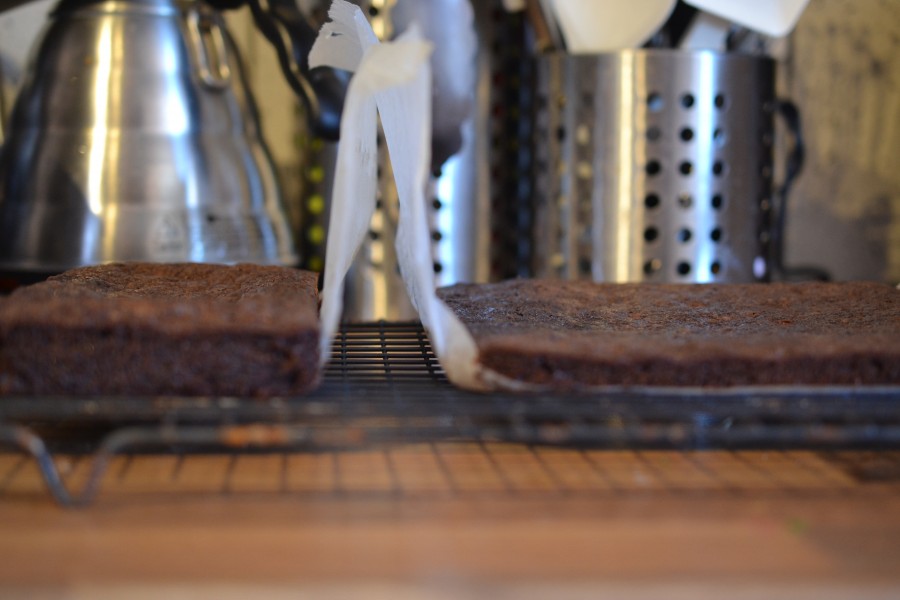 The parchment paper allowed me to safely handle and transfer the entire cooled brownie to my favorite Fiesta Dinnerware Bread Tray. 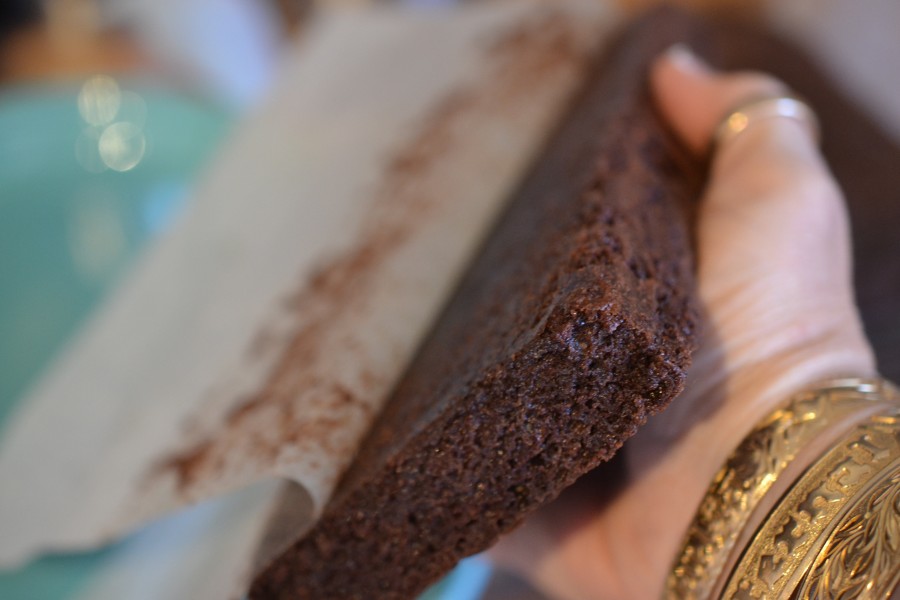 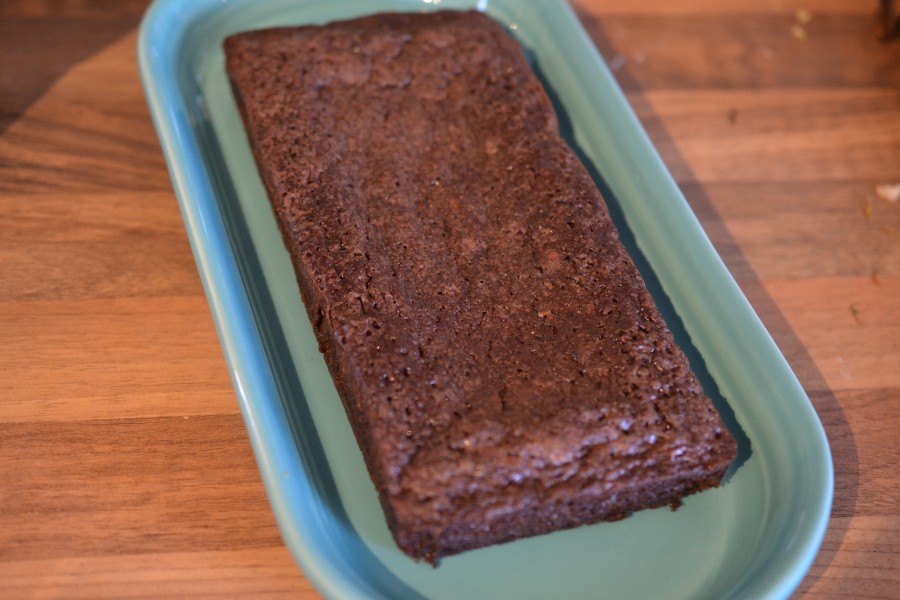 This is a case of brownie and tray being perfect for each other.

I piped on undulating waves of Vanilla Buttercream. 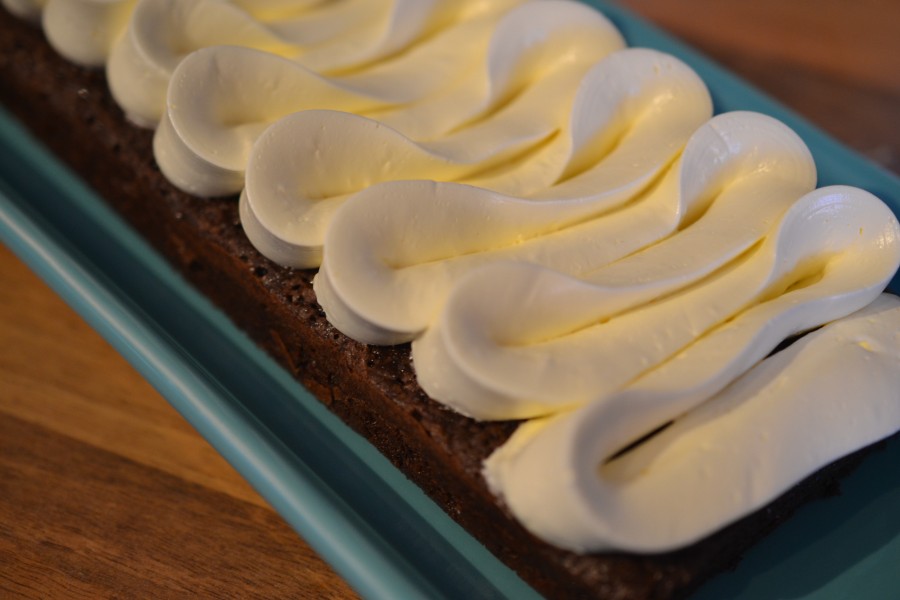 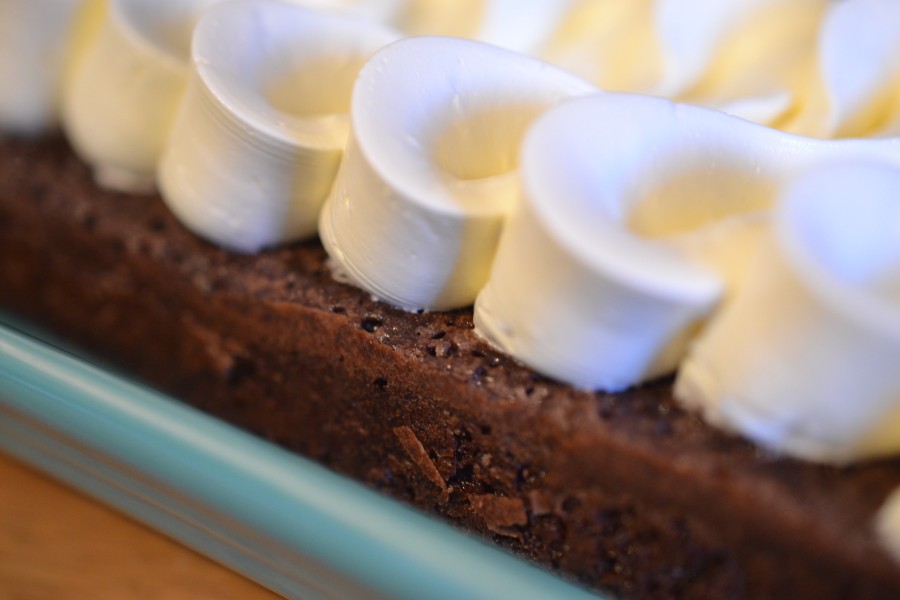 From here, I added fresh fruit.  This would be ideal on any dessert table and would travel nicely to a social gathering (assuming you stay long enough to get the tray back!).  To serve… make about 1″ slices across the entire brownie.  That makes for two edges of yumminess. 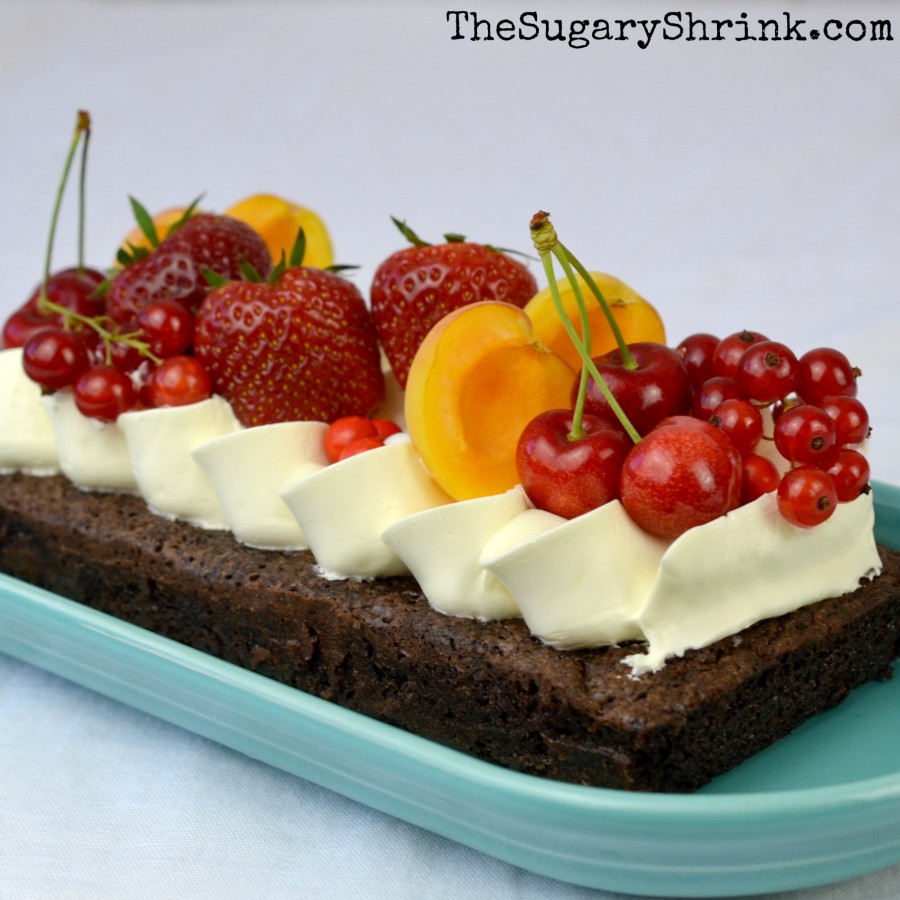 A final tip – in order to carry this to the event and leave it there, I transferred it to a cardboard cake board.  It survived this shift in one piece and looked lovely at the final destination.

The next brownie set, I designed with an eye toward an easy-to-serve experience. 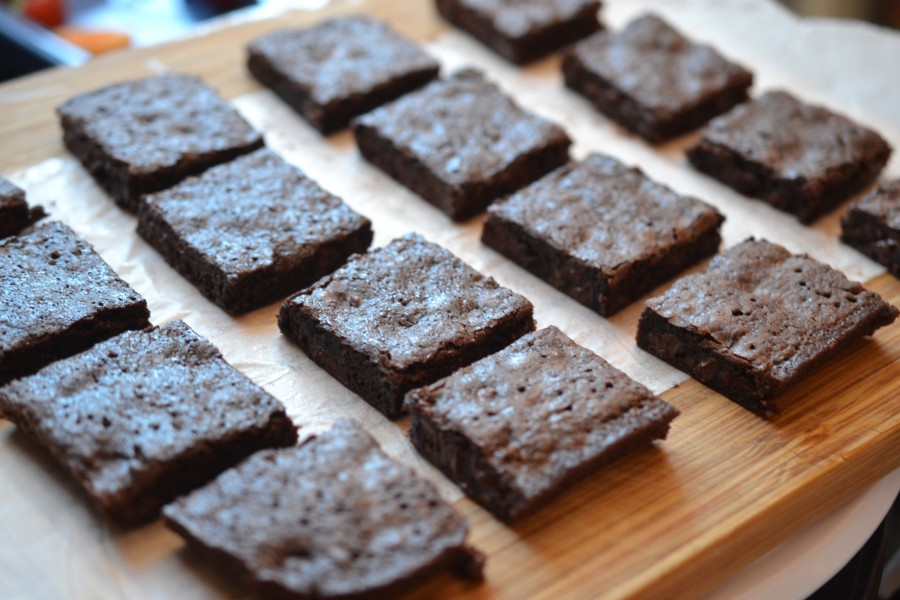 Once the squares were separated, I piped on the Chocolate Swiss Meringue Buttercream.  “How much chocolate did you add?  Some.”

All the Oreos were broken, so I had to roll with that.  I also had a Schogetten chocolate bar and some pink M&Ms. 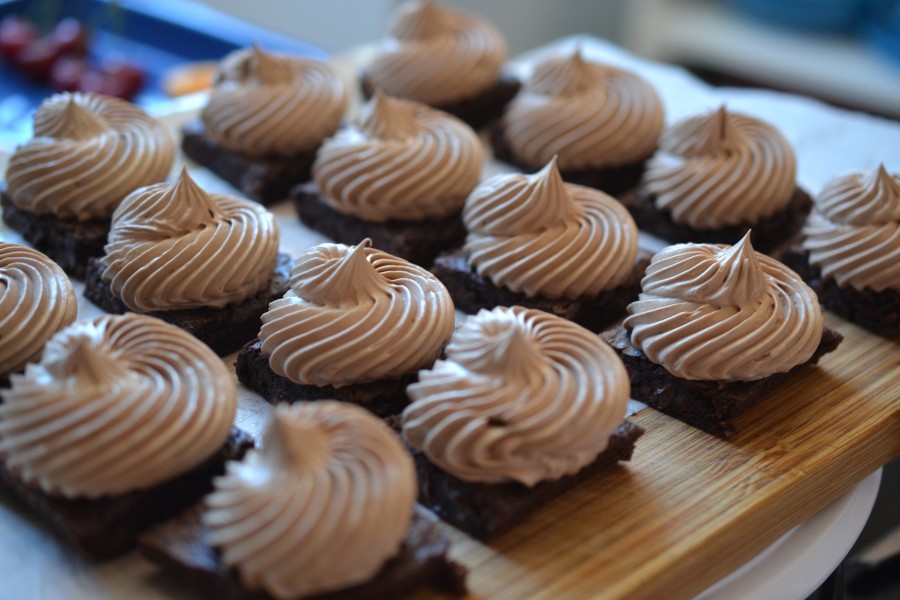 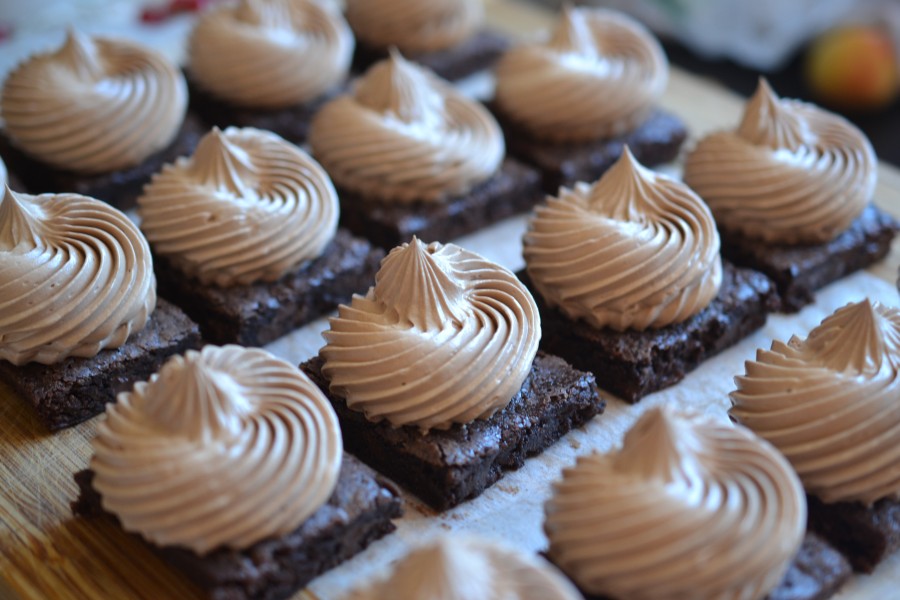 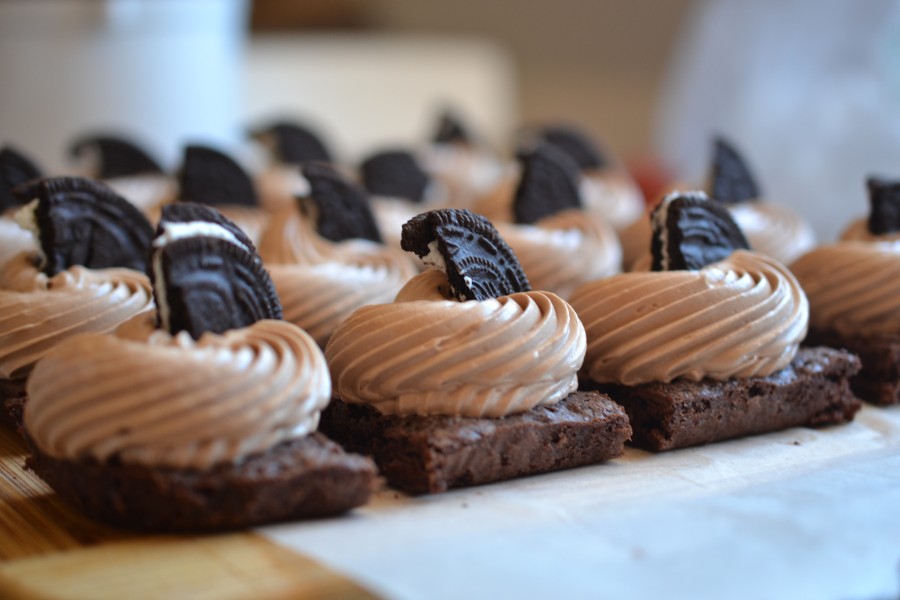 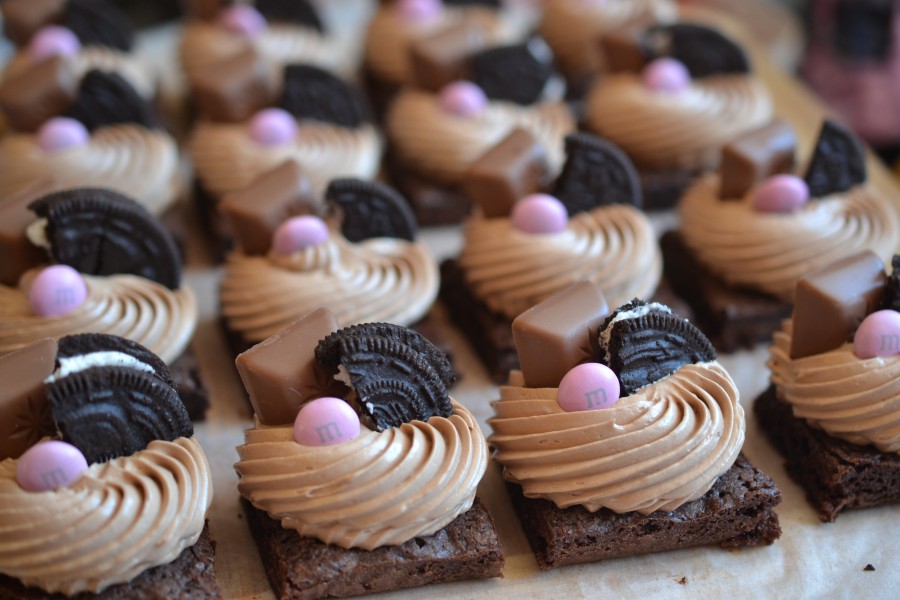 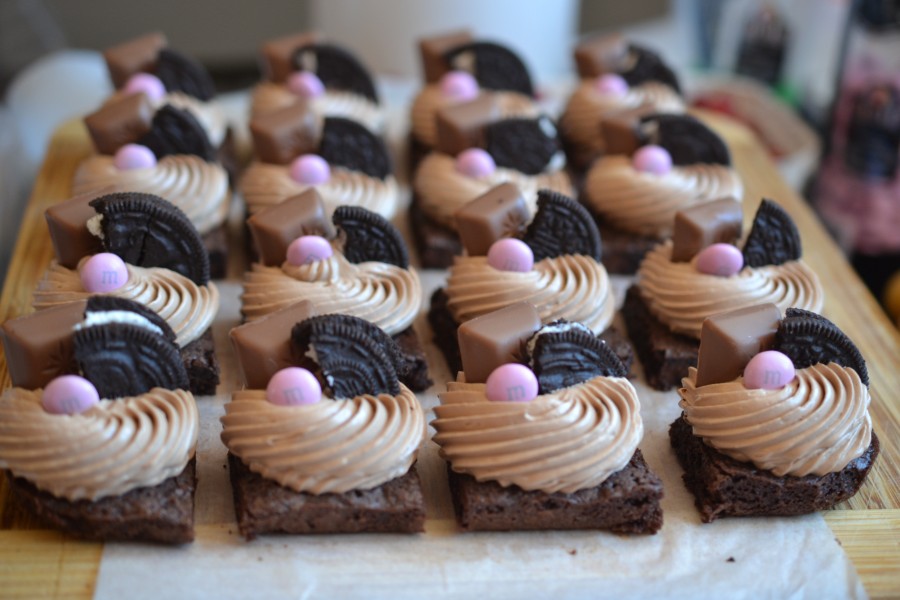 I popped them in the fridge to allow the buttercream to firm up before transferring each piece to a paper cupcake liner.  Each square was chewy and creamy and crunchy – sounds like just the ticket when needing all the chocolate things! 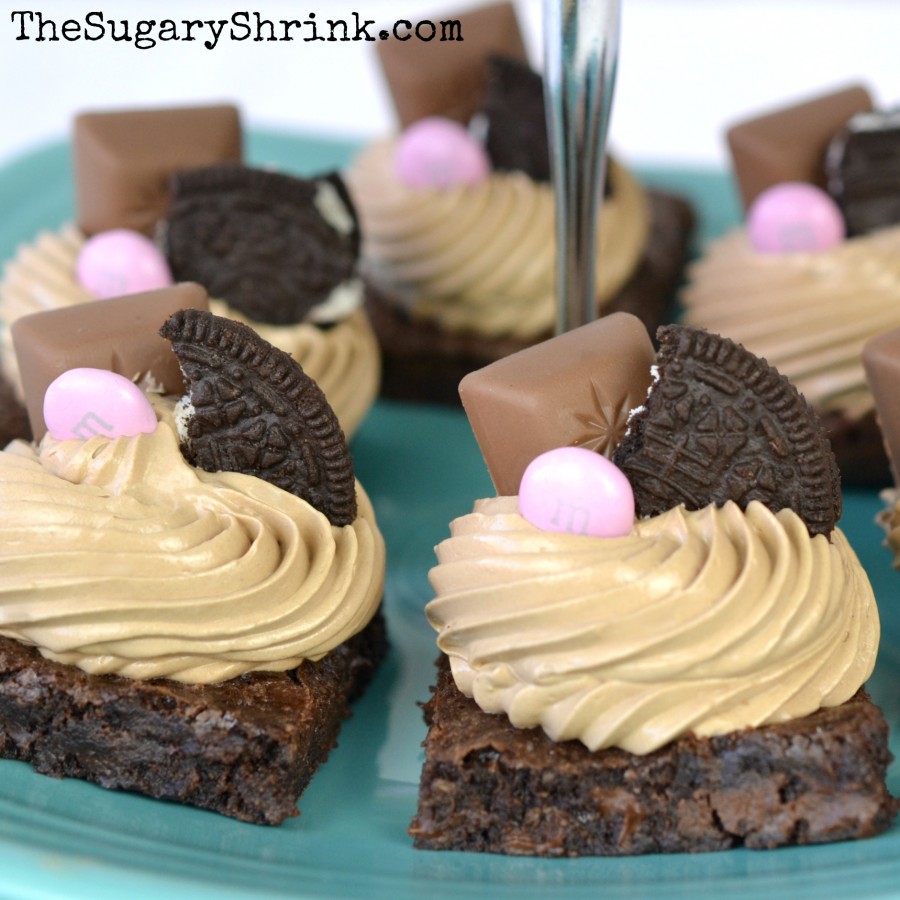 I loved making these brownies; trying new shapes and designs keeps baking so very interesting.  The results were pretty good and I’m already thinking about something similar on my holiday dessert table.

I love that I am supported by my life partner husband when I engage with our community.

I love that our people support these efforts, too.

And I love that sobriety has made it possible for me to contribute in a meaningful way. 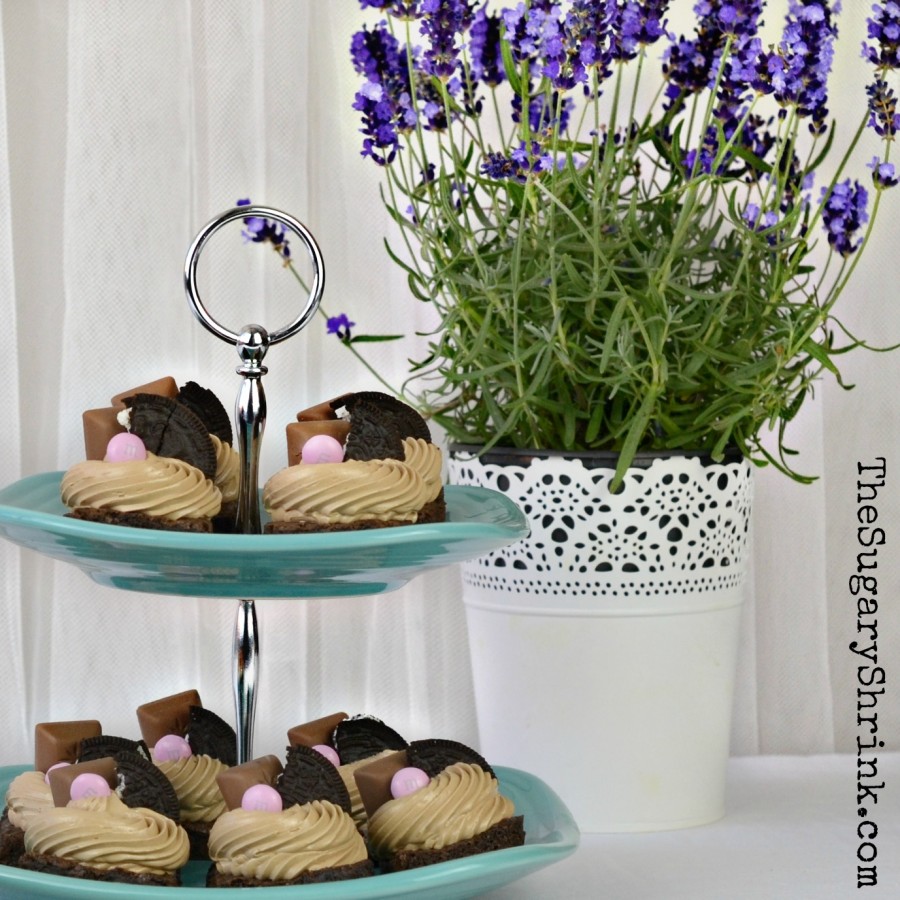